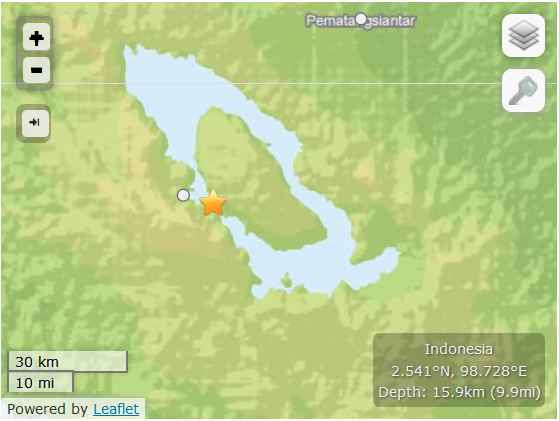 Nothing happening at the moment, but earlier today there was a small flurry of quake activity, including this 4.7. Now that's just a bit big for a volcano usually, and it could be tectonic, but the depth at 15.9km, with a 6km+/- uncertainty error could mean it was as shallow as about 10km- and that is magma chamber territory. And the location, right under the resurgent dome (Samosir Island), is not pretty either.

I pulled raw data to look at that quake, and that's when I discovered several smaller others. I don't know why those have not been reported that I can see.

Toba is the grandaddy of all threats, and bigger than Yellowstone. Since I cannot put the time in I used to watching these things, I'd keep an eye on that monster if I was you. Just a quick word of heads up, folks.

Also, it might be possible that the recent big quakes some 400 km north of there in northern Sumatra might have poked that thing awake, or dislodged something. I hope not. Probably just a fault moving...

*gulp*
edit on Sat Jul 6th 2013 by TrueAmerican because: (no reason given)

posted on Jul, 6 2013 @ 02:20 AM
link
While I am more than sure this isn't a major concern at the moment, it would be wise to keep tabs as the OP suggested. I am not well informed on these types of things but given the size of this thing, an eruption would be devastating.

posted on Jul, 6 2013 @ 02:27 AM
link
Wow, bigger than Yellowstone? No wonder the OP is a tad nervous! Hopefully nothing ends up happening, but the way things go nowadays, I wouldn't be surprised.

Originally posted by jeramie
Wow, bigger than Yellowstone? No wonder the OP is a tad nervous! Hopefully nothing ends up happening, but the way things go nowadays, I wouldn't be surprised.


I have seen quite a few things about Yellowstone, enough to know if it went off we would be in a serious hardship for years to come. I couldn't imagine what could happen if something even bigger went off.

posted on Jul, 6 2013 @ 02:33 AM
link
What concerns me is that warming oceans are raising ocean levels, so what effect are these pressure having on the crust.


Yeah, I saw that quake too.

Not really nervous yet, as it would take a lot more than that for me to start sounding the alarm bells. But there is nothing wrong with just checking it over the next days/weeks, to be sure. If bigger swarms start occurring there, then yeah... nervous. And even then they'd probably say it was just "normal caldera behavior" like they do at Yellowstone.

The other thing is that Toba last erupted some 75,000 years ago, I think, just off the top of my head. Therefore it would seem there can't be all that much magma replenished yet... Until you look at Samosir Island. That is a massive resurgent dome, and it has been steadily growing. Some 1200 ft of uplift, if I recall correctly. That cap can't last forever. *boom*

posted on Jul, 6 2013 @ 03:05 AM
link
Absolutely no disrespect to you, TA, but this is one of the threads I really didn't ever want to read. Even the biggest earthquake we have experienced is nothing compared to what one of these beasts will do. Let's just collectively focus on soothing him back to sleep. But I will be watching...thank you for the heads up.

An eruption here could produce a global volcanic winter for 6-10 years and push the earth into a 1000 years cooling cycle....


hey you OP! how dare you not wakemeup..it,'s my country that you talking about..haha nice op you succesfull make me nerves..

Wasn't there a swarm in 2011 in this area? I think there were some 5's or at least one 5 ish if I remember correctly?

Hopefully the sleeping giant is just rolling over and not actually going to wake up anytime soon.

According to the link above the said extinction that was caused by Toba is no longer a theory nor fact.

n the past, it has been proposed that the so-called Toba event plunged the world into a volcanic winter, killing animal and plant life and squeezing our species to a few thousand individuals. An Oxford University-led team examined ancient sediments in Lake Malawi for traces of this climate catastrophe. It could find none. "The eruption would certainly have triggered some short-term effects over perhaps a few seasons but it does not appear to have switched the climate into a new mode," said Dr Christine Lane from Oxford's School of Archaeology. "This puts a nail in the coffin of the disaster-catastrophe theory in my view; it's just too simplistic," she told BBC News. The results of her team's investigation are published in the Proceedings of the National Academy of Sciences (PNAS).

Originally posted by MamaJ
Wasn't there a swarm in 2011 in this area? I think there were some 5's or at least one 5 ish if I remember correctly?

If I remember right, those quakes weren't directly in the caldera, and especially not that close to Samosir Island, like this 4.7. In fact I think they were some 100 km or more from the caldera, so while I watched it, I wasn't as concerned.

And sad to say, data is not flowing right now for the one station at Toba I usually monitor, so I'm running blind at the moment.


Oh ok.... yeah I figured you would know what I was talking about and be able to clarify either way.

Why do you suppose the data isn't flowing?

posted on Jul, 6 2013 @ 11:46 AM
link
I remember watching that swarm Mamaj ... nervously. If I recall correctly (scary), I believe those never got any closer than off-shore, along a known fault.

As to the new 'evidence', claiming that the extinction event never happened; while interesting and certainly cause for further exploration, I don't think it is by any means conclusive. It is like saying that because the needle wasn't found in this handful of the haystack, than it simply doesn't exist.

We have some pretty good historic (geological) records of what happened when Yellowstone went off, and we know that Toba is bigger. So, no matter what did or did not happen in the past, I believe that the potential for a planet killer event is there.


Just keep an eye on the caldera to make sure the magma chamber isn't filling up and the ground rising. If the ground does being to rise at a fast rate, it's a huge sign that thing may go kaboom. I wonder how many doomsday preppers are prepared for that thing?
edit on 6-7-2013 by lonewolf19792000 because: (no reason given)

posted on Jul, 6 2013 @ 11:51 AM
link
When I think super volcano I think True American.
Really truly appreciate your vigilance.
I don't like it when you say ruh oh though.
Your pretty conservative with warnings so it spooks me.

Whose running the boiler down there, is it the old Satan himself?

You are sitting here, fearing something to happen that never happens ... because your view of this rock is flawed.

Originally posted by lonewolf19792000
reply to post by TrueAmerican


Just keep an eye on the caldera to make sure the magma chamber isn't filling up and the ground rising. If the ground does being to rise at a fast rate, it's a huge sign that thing may go kaboom.


Hmm, just wondering if you missed it. Samosir Island, yeah that big glob you see in the middle of lake Toba on the map in the OP, IS A RESURGENT MAGMA DOME THAT HAS BEEN RISING STEADILY, with uplift of over 1,200 feet. There, hopefully that will get the message across.

That's why I don't like seeing shallow quakes anywhere near that thing.

And MamaJ, there could be all sorts of reasons data is not flowing, and I suspect the new IRIS Web Services as the likely culprit. They are still implementing that new protocol, and probably fiddling with things. Other unrelated stations are out too, is why I say that. But this happens all the time. If you are going to watch live seismic data, it goes with the territory: live with the constant down times. They are complicated networks, with a whole lot of things in the telemetry that can go wrong.

I mean look at this:

edit on Sat Jul 6th 2013 by TrueAmerican because: (no reason given)

What concerns me is that warming oceans are raising ocean levels, so what effect are these pressure having on the crust.