posted on Jul, 6 2013 @ 12:21 AM
link
They got a warrant to lockdown and search a neighborhood? Don't warrants have to specify the exact location and what they are looking for. The man that fired the shots was arrested but no gun was found. So they got a warrant to search the whole neigborhood? That is rediculous!


I would not resist but I would say "you don't have my permission to search"! Then if they did search I'd sue!


I've never heard of a warrant being issued 'to put a neighborhood on lockdown' but that sure is exactly what your source says, word perfect.

That crap is scary. Now I have to worry I'm going to get my privacy invaded or someone is going to molest me, or let my animal loose - or shoot my animal - if some dude two blocks away commits a crime? How does that even compute?

posted on Jul, 6 2013 @ 01:27 AM
link
Step by Step they take our rights, tears in our eyes we
do not wish this fight, push and push until we cannot
ignore, they said it would just be this, that or the other,
now they want more, more, more, how much can you
give and still be counted free, this question they will
be asking of you and me.


From your source it looks like they did NOT search the houses in the neighborhood. Just the one house where the guy lived. Hard to tell from the way it's worded though.

And to the person worried about how their pets would be treated, the source say's they gave everyone the chance to evacuate, but they all elected to stay. I'd have packed up my dogs, my wife, my guns and left. Just so that would be a non issue.

Then when I came back if it turned out they did search my house and trashed it, I'd file a lawsuit. Just like prisoners in prison can file a grievance if a guard trashes their cell during a search.

It's unfortunate, and it sucks, but some random jackass was firing off a gun in their neighborhood. I'd want the cops to take care of it. Better to be inconvenienced for a few hours (as stated in the article) than to have a stray bullet come into your house and kill you or a loved one.

Honestly, as long as the source is 100% accurate, this isn't a big deal. At all.

1. How was it determined that a gun was being fired into the sky and not fireworks, it was fourth of July after all.

2. No gun was found, but 7 people were taken into custody, for what exactly ?

3. Cops are notorious for using false information to obtain search warrants, could it be there was another reason they wanted to search this neighborhood and they used the 4th of July fireworks to convince a district attorney to give them a "reason" to do so?

4. Barging in on families and friends celebrating the 4th, where often times people are drinking alcohol is a recipe for disaster, you get a person with "liquid courage" being challenged and bullied in their own homes and things could get ugly fast.

I hope the people effected by this will give us more details about what actually happened and whether or not they felt "safer" and believed the police acted accordingly and respected their rights.

So someone (the DA?) signed off on the warrant and basically placed the entire neighborhood on lockdown?

Originally posted by beezzer
reply to post by Magister

So someone (the DA?) signed off on the warrant and basically placed the entire neighborhood on lockdown?


I know huh beez....Dear Lord ! Just in the last few days here on ATS I have read stories about college girls being jumped for possibly buying beer ( turned out to be water ) , another young man being detained and having his car searched at DUI checkpoint when he was clearly not drinking, or even asked if he was, another man being arrested and having his dog shot for basically being a smart ass, and filming them....and on and on......

Talk about "boiling the frog".....it's hard to comprehend this happening in our lifetime......odds are the 7 people taken into custody was because of some petty nonsense due to asserting their rights and having "attitude" ...that will not be tolerated by thugs.......

It made me sick listening to Obama pay tribute to the Firefighters that sadly died here in a tragic accident....he felt it necessary to piggy back on a tribute to the cops too, why? Completely different types of people overall.....someone here on ATS explained it to me this way, and it made sense to me.....cops thrive on power, domination and "action" they seek confrontation and a reason to use their weapons.........it takes a "special" kind of person to be a cop now a days......I'm sorry, I know there may be a few good ones, and I have met some and even publicly payed tribute to them......but most now have been groomed to bring in the Police State.....


I don't believe that they searched all the houses. That WOULD be an illegal warrant. What it appears happened is the cops were issued a warrant for the one home and locked down the neighborhood. They gave the residents the opportunity to evacuate or "shelter in place".

Still draconian but not as bad as is being represented.

But Las Vegas DOES over-react many times.

Lockdowns are common around there and they use swat teams regularly.

Just do a google for ""las vegas lockdowns"" and see

Police said a call came in just before 11 a.m. reporting a three-foot-tall bobcat on Bannockburn Street, near Charleston and Rampart in western Las Vegas.

It's for your safety it's for the children!
(or whatever bs excuse they're currently employing. . . . )

It's for your safety it's for the children!
(or whatever bs excuse they're currently employing. . . . )

"It's for your protection as well as ours"

Las Vegas, NV (KTNV) -- It was a tense situation in the central Valley Saturday night.

Las Vegas police and SWAT surrounded an apartment complex near Decatur and Sahara, looking for a wanted woman.

Police haven't said who the suspect is or what she's accused of, only that she's being investigated for fraud.

The situation ended peacefully around 9 p.m.

see the story with a video.

posted on Jul, 6 2013 @ 12:22 PM
link
Has everyone seen some of the neighborhoods in Vegas and surprisingly close to the strip itself? It's like the strip exists in a little magic bubble of police protection for how quickly it becomes very very bad places to be just a few blocks away from it and "downtown" as it's known to the tourists.

I wonder sometimes how much the overkill is for the benefit of citizens seeing it and being intimidated vs. the cops feeling they really need that in case they get it from all sides out of the neighborhood around them. I'd not say the US has many places which have gotten that bad, but we have some and I think some are right in the Vegas area. After all.... Nevada basically consists of two and a half cities (For Metro). Vegas, Reno and Carson City. Yet.. for that? They do have quite a robust crime industry. 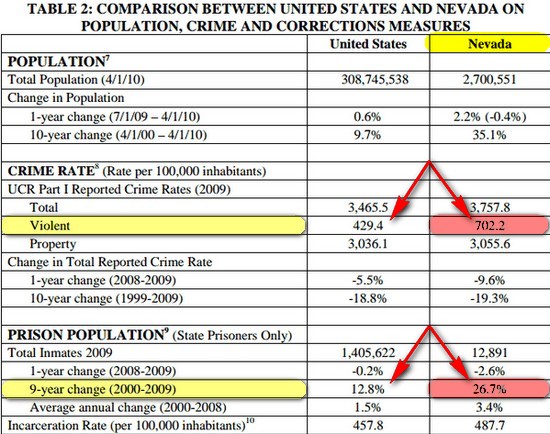 (Highlighting and Emphasis mine)

Anyone local know to say what kind of neighborhood this was in terms of rough and known for being dangerous vs. middle class or above? The extremes in Nevada were one of the things that never ceased to amaze me. So close in the same area, yet so different in level/class.

Crime does seem to be one of the only growing industries of the state though.

It is about 7 miles nw of downtown, and about 10 miles from the the strip (LV Blvd & Flamingo)


Okay, one with local perspective. I passed through Vegas and more on surface streets in N. Vegas for years in the truck but that doesn't make local knowledge by any means.

What do you make of the story? I understand this wasn't to search residences or private buildings anywhere but just to halt traffic of all kinds while they located a gun and made sure the situation was over, right?

Is that among the neighborhoods where cops would have reasons to worry about poking around and behind every bush and car tire without force to back them up at night? I'm just not sure where the outrage is when the outcome seems to suggest it wasn't more than they said it was?

posted on Jul, 6 2013 @ 01:36 PM
link
I grew up in North Las Vegas and remember every year people would shoot there gun in the air. It always sounded like a war going off. there were a few people who got hit by falling slugs. The next morning we would go to my neighbors pool and would always find 1 or 2 slugs at the bottom.

Originally posted by Wrabbit2000
reply to post by xuenchen


Okay, one with local perspective. I passed through Vegas and more on surface streets in N. Vegas for years in the truck but that doesn't make local knowledge by any means.

What do you make of the story? I understand this wasn't to search residences or private buildings anywhere but just to halt traffic of all kinds while they located a gun and made sure the situation was over, right?

Is that among the neighborhoods where cops would have reasons to worry about poking around and behind every bush and car tire without force to back them up at night? I'm just not sure where the outrage is when the outcome seems to suggest it wasn't more than they said it was?


The story is accurate and using swat in Vegas is common.

That neighborhood is not safe. It is mostly low rent apartment buildings on that street.

As I said, LV police many times over-react and over-kill situations like this.

Cops there get shot at a lot and they won't take chances.

The swat teams seal off areas where the police are searching.

In this case, nobody knows for sure why 7 people got hauled off.

My guess is that there was more to this than just gunfire.

It's possible the house in question was under surveillance, or is on a watch list, and that's why all the fervor happened.

The local news stories are always vague and general and seldom give real details.

Swat and lockdown actions are fairly common and that's probably why nobody chose to 'evacuate'.

As for warrants, sometimes the local authorities just issue the warrant and deal with any consequences later.

google "las vegas swat youtube" and see the videos about swat and police.

posted on Jul, 6 2013 @ 04:59 PM
link
Remember Boston? That was the testing ground for American compliance to martial law tactics.

Notice how little attention this thread has received? This is the result of the testing ground. All in a day's work now, no biggie to lock down an entire neighborhood.

Coming soon to a neighborhood near you...