posted on Jul, 5 2013 @ 11:33 AM
link
Geez...just saw this and I can't believe people are actually swimming in this. Unbelievably huge algae bloom just happened there. Cause is not yet known apparently but it happened in a matter of days. Dumbfounded that there are those that will still go swimming in a mess like this that apparently smells really bad as well.


China's Yellow Sea is being taken over by the largest algae bloom in the nation's history, according to The Guardian.

China's State Oceanic Administration said the non-toxic algae, formally known as enteromorpha prolifera, showed up about a week ago and has already spread over 17 square miles, reported Agence France-Presse. 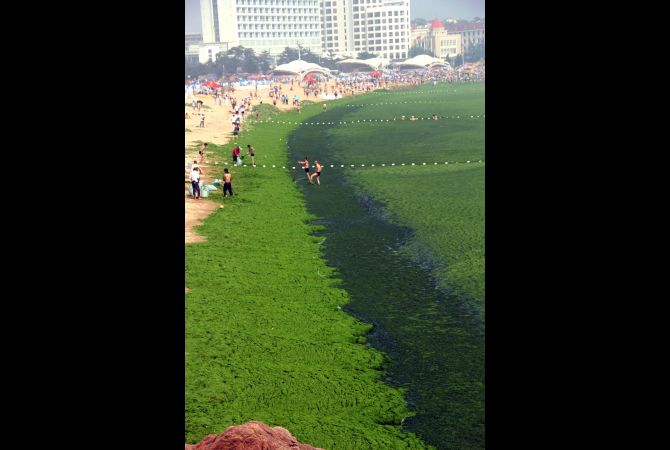 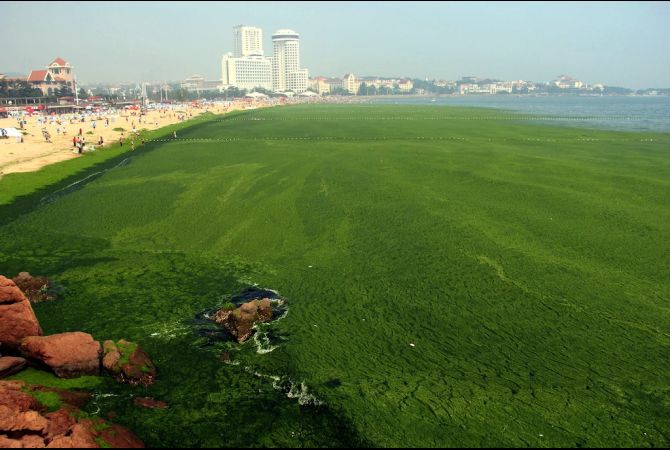 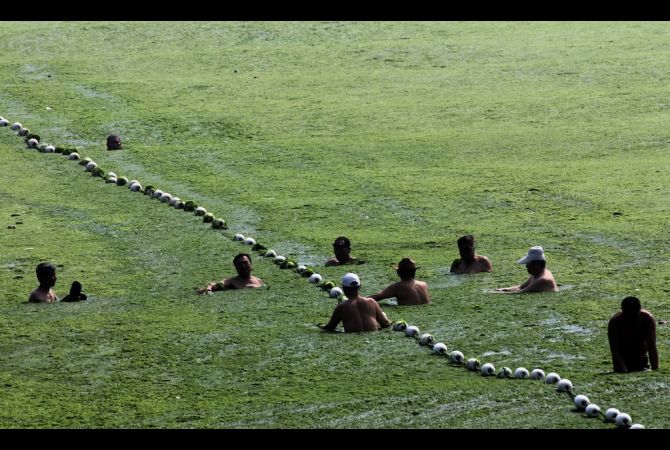 
Super duper gross! I can't believe they didn't close the beach. Can you imagine getting that in your mouth or eyes, it just can't be good for you. Especially when you read this...

But University of Cambridge and EnAlgae Project researcher Dr Brenda Parker told The Guardian that "[a]lgal blooms often follow a massive discharge of phosphates or nitrates into the water" that can come from "farming, untreated sewage or some kind of industrial plant that is discharging waste into the water."

posted on Jul, 5 2013 @ 11:58 AM
link
For every action is a reaction.
Algae produces oxygen, sequesters carbon and consumes nitrogen.
Nature will continue to adapt and compensate for changes in the enviroment.
It doesn't care if swimmers are inconvenienced.


Exactly what I was thinking. If someone was telling me the source could even remotely be associated to raw sewage I would not be anywhere near this. From what they are saying about the smell, that alone would keep me far away from the area in general.

Still unbelievable that people are swimming in it....and even letting their kids play in it. This blows my mind. 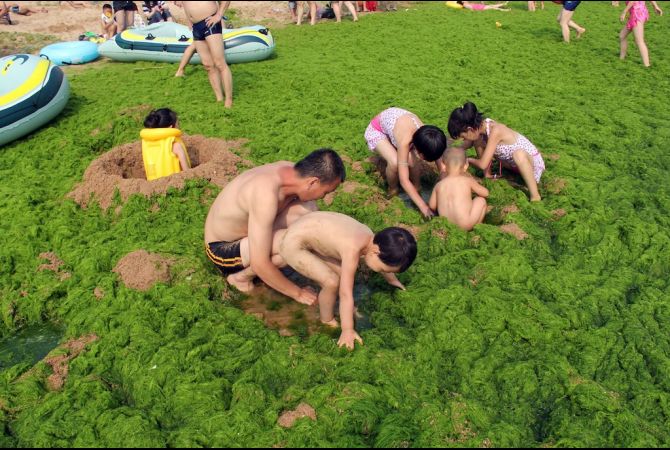 posted on Jul, 5 2013 @ 01:01 PM
link
This particular type of algae is actually quite dangerous when it starts rotting as if gives of high levels of Methane gas

This was a report from last summer :

The proliferation of this Algae has been blamed on the amount of nitrates that are being released into the ground and then into the sea by local industrial pig farms.

I believe that there was also a case of a policemans horse also dying because of this in the same beach area.

Every year and during every day in summer they clear those beaches up but the stuff just keeps coming back.

it is not surpising that they are experiencing this in China and to be quite honest i only think that this will get worse seeing the amount of people that need feeding and the extensive factory farming needed to provide that very food!

Saying that and on a lighter note, i am surprised that the Chinese have not found a way to cook that stuff yet?


It is interesting that no one seems to have any safety concerns.

I live about 40 miles away from the Grand Lake St. Mary’s. At one time it was the largest manmade lake in the world. Over the last 4 years it has been overrun by this algae. The state has spent literally millions of dollars trying to eliminate it. After all it is what brings the money to the area.

Since the problem with the algae started no one has been allowed to swim or boat on that water. From my understanding the algae is a serious health hazard.

So I am curious that China has not taken any precautions.


I did not realize how bad these blooms are nor how many there have been until I started talking to my father in law about his company. They handle water treatment on a large scale and have a product they just got government backing for that actually will work to clean algae on a large scale from fresh water sources. It "soaks" up all the phosphates and nitrates essentially killing off the algae and allowing plant and animal life to be re-introduced into these waters. Very cool chem process that goes into the product and extremely advanced from what I understand. Hoping it will gain some traction and actually be used in areas that are the hardest hit. Right now it is only being used on farmland in order to repurpose the phosphates and nitrates it "soaks" up to be used to fertilize the farmland again.


In August 2009, unprecedented amounts of these algae washed up on the beaches of Brittany, France, causing a major public health scare as it decomposed. The rotting leaves produced large quantities of hydrogen sulphide, a toxic gas. In one incident near Saint-Michel-en-Grève, a horse rider lost consciousness and his horse died after breathing the seaweed fumes; in another, a lorry driver driving a load of decomposing sea lettuce passed out, crashed and died, with toxic fumes claimed to be the cause.[3] Environmentalists blamed the phenomenon on excessive use of nitrates by pig and poultry farmers.

Originally posted by deadeyedick
It is non toxic until it decays when dead.


In August 2009, unprecedented amounts of these algae washed up on the beaches of Brittany, France, causing a major public health scare as it decomposed. The rotting leaves produced large quantities of hydrogen sulphide, a toxic gas. In one incident near Saint-Michel-en-Grève, a horse rider lost consciousness and his horse died after breathing the seaweed fumes; in another, a lorry driver driving a load of decomposing sea lettuce passed out, crashed and died, with toxic fumes claimed to be the cause.[3] Environmentalists blamed the phenomenon on excessive use of nitrates by pig and poultry farmers.

I can't imagine it takes long to begin decaying...and that is a lot to clean up prior to decay.

posted on Jul, 8 2013 @ 09:15 AM
link
It's basicly a sign the oceans getting more acid (lower ph) this because of the higher concentrations of co2 absorbed by the oceans (making the oceans more acid). By this you get more Algae.

I guess they just not get eaten in dead zones so they get every room to grow and grow, they are almost like humans on land
edit on 8-7-2013 by Plugin because: (no reason given)

posted on Jul, 8 2013 @ 09:21 AM
link
nasty stuff indeed. i can only imagine the stench from that when it decomposes. i have a marine aquarium and when i take excess algae out and forget to throw it away, look out as it smells no different than rotting fish.