Score one for cops that do their job.

I recently participated in a few cops-out-of-line-abusing-their-power threads. And since I hate to be perched on only one side or opinion on any subject, and I would not want to suffer cop bashing syndrome, where a stereotype and emotions can overrun people's critical thinking, allowing them to be overcome with prejudice... I felt the need to post a story that ended without incident.

One where police acted as they should, taking someone into custody without killing them and carrying out their roll as protectors of the peace, as it's intended.

Keep in mind they responded to a call here. A citizen called them for help, and they have to act on that. They came, they attempted negotiations, and when that failed they sent in a strike team, the team arrested the man without killing him, or dogs, cats, spiders, etc.

After an hours-long standoff with Vancouver police Wednesday night and Thursday morning, a man is in custody and could face weapons and threats charges.

Vancouver police responded to a call around 8:30 p.m. Wednesday at a house near 43rd Avenue and Main Street.

When officers learned that the man alone in the house might be distraught and in possession of a rifle, they began negotiating with him.

After more than five hours of dialogue, the negotiation had become "unsuccessful and unproductive," said police Const. Brian Montague.

At that point, the VPD's emergency response team entered the home and arrested the man without incident.

posted on Jul, 5 2013 @ 04:33 AM
link
more often than not they do get things done proper without loss of life , limb or property damage .. but that doesnt make good reading in the news ..

good to see a report on an incident that ended well make the news for a change ...

Well those are Canadian cops. Everyone knows that American cops are bloodthirsty savages!


Seriously, though....the American police abuse tends to be a little stronger than the Canadian variety. 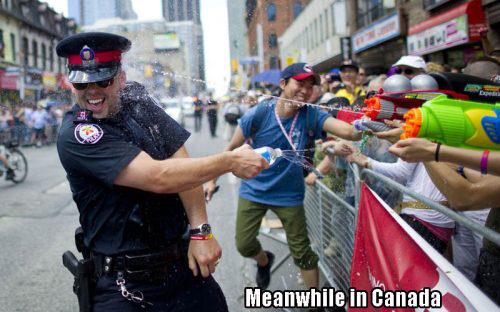 Toronto Cops are kinda cool, York Regional ones are a**holes and racial pro-filers. are awesome, in case you are watching me.