posted on Jul, 4 2013 @ 09:33 PM
link
Young Satanist killed two men in Arkansas last week. He was walking home from grocery store, crossing an alleyway. Had a machete in his pants. Local home owners stopped him to find out what he was doing.

Local news showed his "room"--chicken? blood splattered on all the walls, inverted pentagrams drawn in blood.

Interview with mother showed a person that appeared to be tweaking on meth. 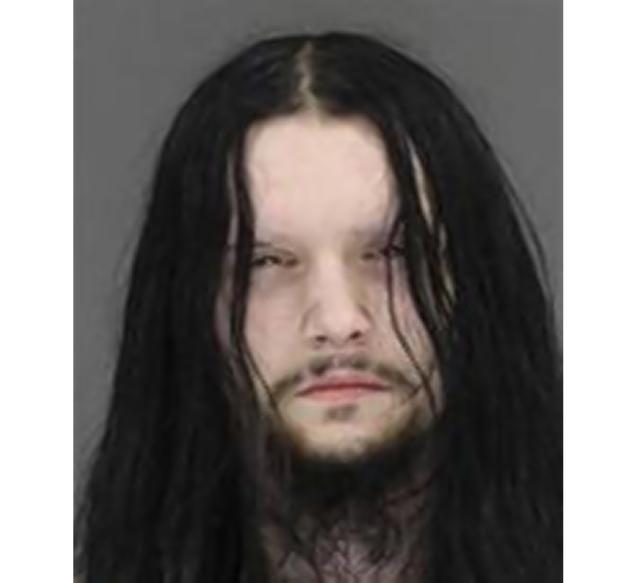 When he spoke to police, Kinsey said he was walking home from the store when he saw a man he thought used to date his mother and was abusive toward her. Kinsey moved up into a space between a house and shed to get a better look, when he said a man asked him why he was “creeping around in the shadows,” according to a police report.

Kinsey said after explaining himself he became angry, threw down his bags and told them he didn’t want to go to prison tonight. As he started to pick up his groceries, Kinsey told police the men approached and one told him that talking like Satan and Kinsey’s knife didn’t scare him, according to the report. Is that a machete in your hand, or are you just pleased to see me!


The young Satanist hacked two local men who were drinking beer on their porch, but approached him when he was traversing an alleyway between their houses.

Nathan Young, 32, and Brandon Prince, 39, were stabbed to death, near the intersection of North 16th and North D Street in Fort Smith, just before 10 p.m. on June 26, according to a police report.

An eyewitness said he was on the front porch of the duplex having a beer with the two victims when Kinsey was seen walking in the alley next to the home with grocery bags in his hands.According to court documents, Kinsey said he was walking back from the Dollar Store when he thought he saw a person who used to date his mother. While looking through a backyard, Kinsey said he was confronted by three people who wanted to know why he was there.

Kinsey and the victims exchanged words and Kinsey pulled out a machete to warn them, the documents state.


The article in the end said someone heard he mention "Satan." But it doesn't say he is a Satanist in the article at all. I don't see the connection.


It looks like blood and it appears he is some type of Satanist then because of the artifacts in his home. The other article only mentioned someone hearing him saying the word "Satan" which made me skeptical of the claim. But he could be some weird Satanist. Just saying.


Reading the information on the page you linked to, it appears that Mr Kinsey was a cutter, which may explain the various interesting images of various blood spatters which adorned his apartment. It appears as if he had self harmed, and then allowed gravitational droplets to fall from his wounds, onto bits of white paper or card. Also, there was evidence of blood all over his dwelling.

Kinsey's mother reported that she had been concerned about her son, because he was complaining of being bullied, that he felt outcast from society, and had started to carry the machete for protection. They symbology in the dwelling does seem to have links to satanic ritualism, and there was some suggestion that Kinsey may have performed animal sacrifice in his home.

posted on Jul, 5 2013 @ 02:47 AM
link
Where does the article says he is a Satanist? Even if he was a Satanist what would that have to do with his actions here?

There are people who believe many different things who commit violent acts.


I completely agree with this statement.

People do crazy things wether they are Christian, Muslim, Atheist or Satanist. The real story headline should have been "Yet another person, forgotten/ignored by mental health services, goes postal."


The "Mental Health system" can (and should) only be allowed to get involved when courts or other representatives of the State request involvement.

It may well be that the mother was an only parent, and that she had had previous problems with the Law (she appears to be a meth user in the video--typical "tweaking" motions).

We do live in a society that occasionally glorifies Satanism. This boy's actions are likely a result of that.