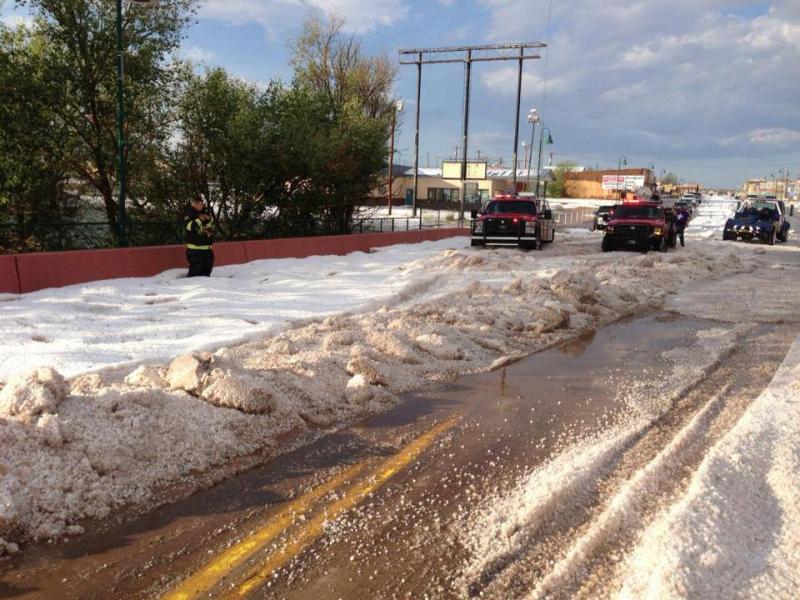 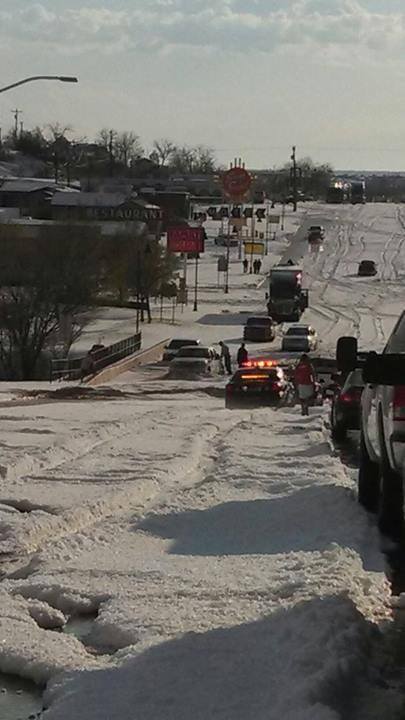 Very strange weather occurrence for July 3rd. Texas is having record lows, while northern California sees close to record highs. It's because of the jet stream's strange orientation, which looks like it is becoming more of the new "normal" in the last few years. If anyone thinks we can change the jetstream, good luck with that, it is what it is and as humans have done and must continue to do, we will adapt.

Please don't let this thread descend into a global warming fiasco, I will have no part of it.


Wow! And here I am way up north from you being warned by the weatherman not to go outside because of the high heat and humidity. Hail can be quite damaging to cars etc. Notice any?

Wow this is incredible!

posted on Jul, 4 2013 @ 02:15 PM
link
Yep. -
The Earths jet-streams, have been shifting towards the poles over the course of the past few years. This is one of the main reasons for all of the weather anomalies that are becoming more and more frequent. Changes in the jet-stream, mean a complete change in weather patterns all over the world. The jet-stream that controls weather systems in the U.S. for example, the Northern jet-stream; is moving further north - along with the other jet-streams, that are also shifting.

Two other jet streams in the Southern Hemisphere are also shifting poleward, the study found.

The northern jet stream "is the dominant thing that creates weather systems for the United States," said study co-author Ken Caldeira, a climate scientist at the Carnegie Institution of Washington in Stanford, Calif. "Bascially look south of where you are and that's probably a good guess of what your weather may be like in a few decades."


Whacked ! That's all that comes to mind.
This is just absolutely whacked. Not so much
if it just happened to hail. But by shear volume ?

Thanks for sharing SnF
edit on 4-7-2013 by randyvs because: (no reason given)

posted on Jul, 4 2013 @ 02:45 PM
link
In a thread I authored a while back, it was found that the jetstream was subject to wandering in recent years.


Earth has seen some highly unusual weather patterns over the past three years, and three new studies published this year point to Arctic sea loss as a potential important driver of some of these strange weather patterns. The record loss of sea ice the Arctic in recent years may be increasing winter cold surges and snowfall in Europe and North America, says a study by a research team led by Georgia Institute of Technology scientists Jiping Liu and Judith Curry. The paper, titled "Impact of declining Arctic sea ice on winter snowfall", was published on Feb. 27, 2012 in the online early edition of the journal Proceedings of the National Academy of Sciences. 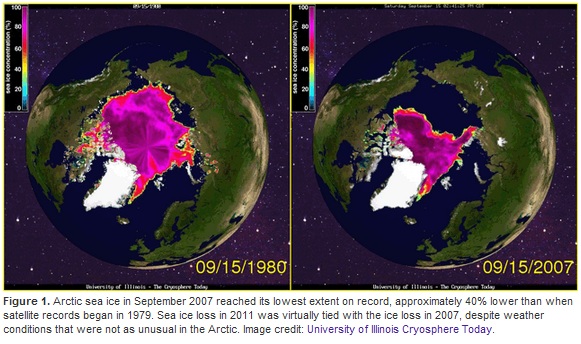 According to the post, the melt in 2007 was even more extreme than the most recent summer, but weather patterns have been affected nearly as much.

The Arctic has seen a stunning amount of sea ice loss in recent years, due to melting and unfavorable winds that have pushed large amounts of ice out of the region. Forty percent of the sea ice was missing in September 2007, compared to September of 1980. ... The Georgia Tech study found that Arctic sea ice loss had caused a 20 - 60% weakening of the west-to-east belt of winds circling the pole in recent years, producing broader meanders in the jet stream that allowed it to get "stuck" in place 20 - 60% more often. When the jet stream gets stuck in place for a long period of time, we say a "blocking pattern" has set up. ... Such a blocking pattern began on January 26, 2012 and lasted until February 11, bringing and exceptionally cold and snowy conditions to much of Europe, which lay on the cold side of an elongated loop of the jet stream that got stuck in place. Conversely, most of North America and northern Siberia saw unusually warm temperatures during this period, since they were on the warm side of the jet stream.

This explains perfectly why the US had such a mild winter while Europe experienced record setting snow storms. If the Jet Stream acts as a sort of "fence" for air masses, and it gets stuck in position for extended periods of time, then anything on the "warm" side of the fence will remain warm, while anything on the 'cold' side will experience that end of the spectrum.

"The question is not whether sea ice loss is affecting the large-scale atmospheric circulation...it's how can it not?" That was the take-home message from Dr. Jennifer Francis of Rutgers University, in her talk "Evidence Linking Arctic Amplification to Extreme Weather in Mid-latitudes, presented at December's American Geophysical Union meeting in San Francisco. Dr. Francis presented new research that has just been published in the journal Geophysical Research Letters, which shows that Arctic sea ice loss may significantly affect the upper-level atmospheric circulation, slowing its winds and increasing its tendency to make contorted high-amplitude loops. High-amplitude loops in the upper level wind pattern (and associated jet stream) increases the probability of persistent weather patterns in the Northern Hemisphere, potentially leading to extreme weather due to longer-duration cold spells, snow events, heat waves, flooding events, and drought conditions. Dr. Francis describes her work in a March 5, 2012 post on the Yale environment360 web site.

A similar blocking pattern could be in place pulling cold air down over the area that experienced the hail and at the same time be keeping the hot air in place over Northern California.


I agree 100%. That same pattern is what is being blamed for the recent weather changes in the last couple of months.

Greatly appreciate your info and contribution, it helps give context to what's happening.

posted on Jul, 4 2013 @ 08:44 PM
link
The hail looks to be pea to .25 inch in diameter. If one doesn't mind a few dents (well, a lot actually). You could get a pretty good deal for a car at ANY dealership. I used to live in Denver and saw some pretty impressive hail storms, but this one takes the first place.

Changes in the jet-stream, mean a complete change in weather patterns all over the world. The jet-stream that controls weather systems in the U.S. for example, the Northern jet-stream; is moving further north - along with the other jet-streams, that are also shifting.


It's a common misconception that the jetstream causes weather. In fact, the opposite is true. The jetstream(s) form above the convergence of two large air masses. It is that lower level convergence which leads to various weather patterns. The jetstream can push moisture around (if it reaches that level) and it can even inhibit the development of very strong systems (because of the vertical wind shear). Knowing the location and intensity of the jet stream can be very helpful in weather forecasting. I think that Caldiera was somewhat misquoted there. From the actual paper:


Jet streams are important because synoptic scale disturbances tend to form in the regions of maximum jet stream wind speed and to propagate downstream along storm tracks that follow the jet axes [Holton, 1992]

posted on Jul, 4 2013 @ 10:14 PM
link
I don't think I have ever seen that much hail during the summer, even up here. We get a little summer snow quite often but not usually a lot builds up. Better they have it there than us getting it here..

Stopped off there for a couple days on vacation once.

They have a swimming hole there called Blue Hole. I don't know much about it, other than the water was beyond cold, and they had the bottom caged off but to divers.

I liked it for the most part.

But these hail-storms hit different parts of New Mexico nearly every year with the same force or worse..

I've seen the same with 3 and 4 inch stones in Hobbs a number of years back.

I wasn't implying that it 'caused' the weather.
I was talking about how it's responsible for the Earths weather patterns.
And how a shifting jet-stream could definitely be a cause of strange weather in different places.
edit on 5-7-2013 by iunlimited491 because: (no reason given)

posted on Jul, 5 2013 @ 01:37 AM
link
What was the temp the day that hail fell? Did it melt fast.I think people see that much hail and think it must be cold, but hail usually falls on warm days.

I live in Central Cali.

Originally posted by Phage
reply to post by SonOfTheLawOfOne

No. "Higher temperatures" does not "=stronger convection", and does not "=thunder and hail". There are many factors for a large hail storm, and strong/severe thunderstorms in general. Strong storms don't need high temperatures as much as they need high instability in the atmosphere. High temperatures are only part of the whole grand scheme of things; there needs to be a lot of sunshine to literally energize the surface air, which increases the SB CAPE, and there are still many other things.

For a particularly severe thunderstorm, there needs to be a relatively high lifted index, which is essentially the difference of temperature between a rising parcel of air, and the atmosphere surrounding it, which strengthens the updraft. Steep lapse rates also have a part in creating strong thunderstorms, as when the rate at which the temperatures in the atmosphere decrease with height, increases, the updraft can become very strong.

A low level jet is also particularly useful in helping thunderstorms to become severe, when there is little CAPE or lifted index, as the LLJ will bring in energy and moisture into the storm, which strengthens the updraft, and when the downdraft brings the low level jet to the ground, you can get a very strong downburst.

Helicity plays a big role in creating tornadoes, as it means just how "strongly" an updraft will rotate.

Jet streams are also crucial in creating severe thunderstorms, as the upper level winds separate the updraft from the downdraft, thus permitting the updraft to grow stronger, and allows the cloud to grow taller, thus the moisture "taps" into the very cold air, and creates an innumerable amount of ice particles, which when cold, but not yet frozen water freezes on the surface, as the ice particles act as large condensation nuclei, the ice grow larger, and eventually be too heavy for the updraft to sustain.

Though there may be a few remaining updrafts, or perhaps newly formed clouds on the edge of the storm, which when start rotating, can begin to lower, and after the rear flank downdraft begins to wrap around the funnel, the rotating increases in strength, and you get a full-fledged, supercellular tornado.

Just because you have "high temperatures", doesn't mean you'll get a huge thunderstorm with hail
edit on 5-7-2013 by extraterrestrialentity because: (no reason given)

posted on Jul, 5 2013 @ 03:01 AM
link
reply to post by extraterrestrialentity
Exactly. The streets in New Mexico looked this in my neighborhood, but in all honestly take away 1/2 inch.

posted on Jul, 5 2013 @ 03:12 AM
link
Does anyone see the irony in the fact that climate change is causing (sort of) stabilized weather patterns?


Actually, it's not very stable. For such a storm to be created with relatively low moisture in the lower part of the atmosphere, and a simple trough, is quite unusual. Even with mountain convection, so much hail is rather unusual. A large dip in the jet stream, combined with steep lapse rates, and large difference in temperatures between the mid-upper level part of the atmosphere, and perhaps even between the lower part, and surface air, can make this happen without much moisture. A little mountain convection is good too.

It's not everyday you have so much hail in NM.