Did Andromeda crash into the Milky Way 10 billion years ago?

(Phys.org) —For many years scientists have believed that our Galaxy, the Milky Way, is set to crash into its larger neighbour, the Andromeda Galaxy, in about 3 billion years' time and that this will be the first time such a collision has taken place. But now a European team of astronomers led by Hongsheng Zhao of the University of St Andrews propose a very different idea; that the two star systems collided once before, some 10 billion years ago and that our understanding of gravity is fundamentally wrong. Remarkably, this would neatly explain the observed structure of the two galaxies and their satellites, something that has been difficult to account for until now. Dr Zhao will present the new work at the RAS National Astronomy Meeting in St Andrews on Thursday 4 July.

The Milky Way, made up of about 200 billion stars, is part of a group of galaxies called the Local Group. Astrophysicists often theorise that most of the mass of the Local Group is invisible, made of so-called dark matter. Most cosmologists believe that across the whole universe, this matter outweighs 'normal' matter by a factor of five. The dark matter in both Andromeda and the Milky Way then makes the gravitational pull between the two galaxies strong enough to overcome the expansion of the cosmos, so that they are now moving towards each other at around 100 km per second, heading for a collision 3 billion years in the future.

But this model is based on the conventional model of gravity devised by Newton and modified by Einstein a century ago, and it struggles to explain some properties of the galaxies we see around us. Dr Zhao and his team argue that at present the only way to successfully predict the total gravitational pull of any galaxy or small galaxy group, before measuring the motion of stars and gas in it, is to make use of a model first proposed by Prof. Mordehai Milgrom of the Weizmann Institute in Israel in 1983.

This modified gravity theory (Modified Newtonian Dynamics or MOND) describes how gravity behaves differently on the largest scales, diverging from the predictions made by Newton and Einstein.

Dr Zhao (University of St Andrews) and his colleagues have for the first time used this theory to calculate the motion of Local Group galaxies. Their work suggests that the Milky Way and Andromeda galaxies had a close encounter about 10 billion years ago. If gravity conforms to the conventional model on the largest scales then taking into account the supposed additional pull of dark matter, the two galaxies would have merged. 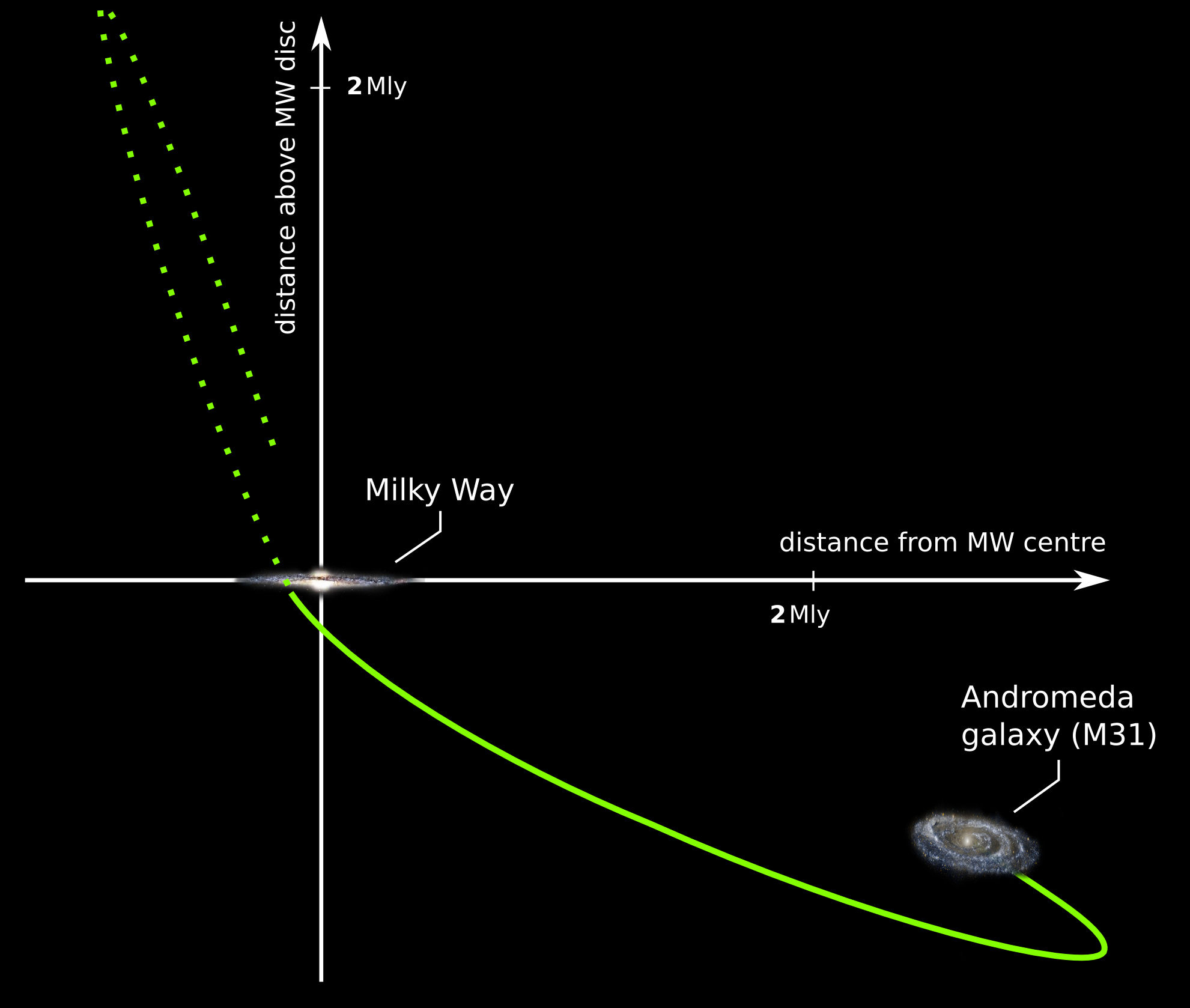 posted on Jul, 4 2013 @ 06:23 AM
link
Well hmm this should be interesting, but the sad thing is it is something that we cannot directly observe ( at least at this point in time ) to see how well this holds. I'm curious as to this new model of gravity would these two galaxies continuously keep passing each other not merging at any point or would their become a time when they do? They also don't seem to take into account the Super Massive Black Holes in the center of both galaxies. If they were to come close enough to one another wouldn't that cause a merge? If I were to go along with this and say "Yes they perhaps did collide a few eras ago." Then would it be acceptable to say that they just weren't close enough to those Black Holes to tug on one another and just lightly brushed against the arms? If this is true and the next collision is dead on I think it would be a safe bet that it seems like the next one would be the last one as they would merge at that point?

It's around 7:30 in the morning and just trying to wrap my head around most of this so you will have to excuse my arguing with myself a bit

posted on Jul, 4 2013 @ 06:53 AM
link
My feeling is, the time scales involved in viewing 2 galaxies merge are so large that no astrophysicist could observe such a thing, so where are they pulling this crap from?


But this model is based on the conventional model of gravity devised by Newton and modified by Einstein a century ago, and it struggles to explain some properties of the galaxies we see around us. Dr Zhao and his team argue that at present the only way to successfully predict the total gravitational pull of any galaxy or small galaxy group, before measuring the motion of stars and gas in it, is to make use of a model first proposed by Prof. Mordehai Milgrom of the Weizmann Institute in Israel in 1983.

So while it was an interesting model for 1983, I'm not sure these scientists appreciate the relevance of the bullet cluster observations regarding that Modified Newtonian Dynamics model. While it's tempting to deny the existence of dark matter since nobody has found out what it is, the bullet cluster observation makes it hard to deny, and they seem to be denying dark matter exists, if I'm interpreting that article right.

Since the mapped out all dark matter and stuff...

Back to the drawing boards again ?

Originally posted by MariaLida
, in about 3 billion years' time

posted on Jul, 5 2013 @ 03:13 AM
link
From the pictures and animations I've seen, the two colliding galaxies' shapes are distorted significantly by the encounter. To me, the shapes of the Andromeda and the Milky Way (from data we can glean) look too regular to be the result of a collision. I also doubt the Andromeda would get as far as 2.5 million ly away from us before it reverses direction again.

The Milky Way and Andromeda have collided or interacted with smaller galaxies, but I don't see any evidence that they collided with each other. The consequences of such a collisions would be easily visible.

Here are some photos of colliding galaxies: d1jqu7g1y74ds1.cloudfront.net...

And here's a computer simulation:


It's a messy affair, with stuff being flung all over the place, and the super-massive black holes feeding frenzily on all the infalling material.

From the pictures and animations I've seen, the two colliding galaxies' shapes are distorted significantly by the encounter. To me, the shapes of the Andromeda and the Milky Way (from data we can glean) look too regular to be the result of a collision.

That's exactly what I was thinking. The suggestion that these two galaxies had a very close encounter in the past really doesn't make any sense to me.

Originally posted by wildespace
And here's a computer simulation:

Look at the simulation around 35 seconds, that is probably about what they are claiming is the state now after the first pass, and they are moving back toward each other.

Regarding the debris and stuff flung everywhere by the collision, my understanding of their theory is that all the satellite galaxies are the "smoking gun" evidence of exactly that. I'm not convinced of their claim at all, but it's because of their apparently denial of dark matter. I would expect the galaxies to return to somewhat normal looking after 10 billion years, and the animation actually shows they more or less do at around 35 seconds. We do have a lot of smaller galaxies in our cluster....how could we tell if they were or were not debris from a prior collision like the collision prior to 35 seconds in the animation?

Originally posted by Sinter Klaas
Can I ask what would be a conclusion if this would be a valid theory ?

Since the mapped out all dark matter and stuff...

Back to the drawing boards again ?


Neil Tyson says scientists are always at the drawing board, so there's no "back to the drawing board". As I said in my first reply, D. Clowe and many of his peers don't think they could explain observations in the bullet cluster without dark matter ( arxiv.org... ), though Moffat, Brownstein and a few others disagree ( arxiv.org... ). However the theory does explain some other observations to some degree without the use of dark matter.

Can Effects of Dark Matter be Explained by the Turbulent Flow of Spacetime?

We propose an alternate explanation for the observed stellar motions within galaxies, combining the standard treatment of a fluid-like spacetime with the possibility of a "bulk flow" of mass through the Universe. The differential "flow" of spacetime could generate vorticies capable of providing the "perceived" rotational speeds in excess of those predicted by Newtonian mechanics. Although a more detailed analysis of our theory is forthcoming, we find a crude "order of magnitude" calculation can explain this phenomena. We also find that this can be used to explain the graviational lensing observed around globular clusters like "Bullet Cluster".

So they even claim to address the bullet cluster problem, though I didn't find his more detailed analysis in my search so maybe he hasn't published it yet. I like the creative thinking even if it turns out to be wrong.

posted on Jul, 5 2013 @ 09:40 AM
link
From what I have seen in images of both galaxies, they are each accompanied by smaller "drawf galaxies".
These appear to be in fairly orderly condition to have been involved in even close approaches from either of their larger companions.
I would think if a collision or close call had happened within the past few billion years, some signs of "disorder" would still be apparent. These smaller galaxies and star clusters should be in some way "strung out" between them.

Originally posted by teamcommander
I would think if a collision or close call had happened within the past few billion years, some signs of "disorder" would still be apparent.

I don't think ten is really a "few" is it? Ten billion years is a long time.
That's over 2/3 of the age of the universe!
edit on 5-7-2013 by Arbitrageur because: clarification


Point taken.
However, with the passage of this much time the two galaxies should have either been consolidated by now or be much further apart. Their closing velocities should be much higher if they had had a close encounter and been captured by their relative gravities.
There still should have been a disturbance in the placements of their companion star clusters and drawf galaxies.

I may be wrong, I am not currently looking at any images just drawing from memory, but I think there is a star cluster on the edge of the Milky Way in the direction of Andromeda. It's presents so close to "us" should indicate the lack of a disturbance. Of course, unless it was captured since this event.