posted on Jul, 3 2013 @ 07:50 PM
link
Hi folks,
when I saw the weather conditions in the world I saw a thick cloud formations and wide in the southeast america .. 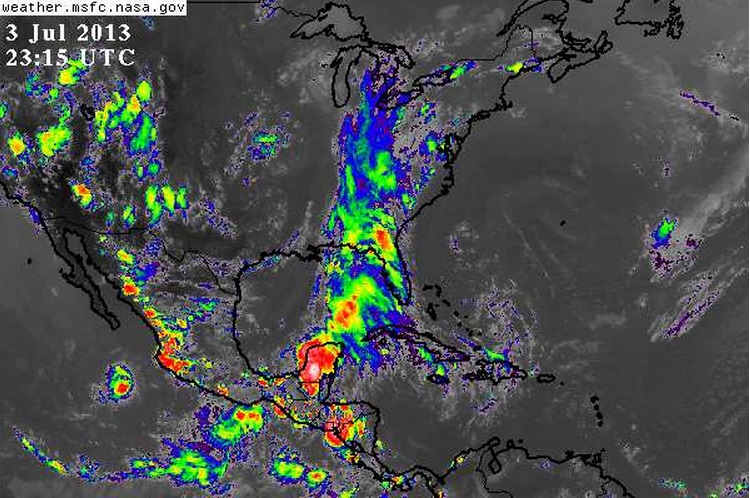 I think this formation will form the storm in some areas there .. my advice for you my friend to be careful if you in southeast america..

I think this formation will form the storm in some areas there .. my advice for you my friend to be careful if you in southeast america..

Thanks for the care and compassion for others cheesy
NAMASTE*******


Your Welcome Mr. Ophiuchus Have a nice day..

posted on Jul, 3 2013 @ 09:11 PM
link
We are forecasted to get up to 5 inches, and flash flood warnings in effect from Weds night through Friday. Checked the forecast for the rest of July and thunderstorms anticipated every day except 1. And its rained everyday for the past week. Been a very rainy summer so far. Family in Florida are grieving they are getting so much rain, and its all headed up the east coast and into the Ohio Valley. Noah is due to drift by this way again tomorrow for a last check about.

Originally posted by braveswin
Been POURING rain. With lots of thunder. No lightning

Originally posted by cheesy
look at that!

posted on Jul, 4 2013 @ 03:53 AM
link
That's not a "cloud formation", Cheesy.
A trough is sucking tropical moisture out of the Caribbean and acting like a conveyor belt by way of dragging it over FL & up in to the north. This trough is butted up against a ridge that is basically running off the Yucatan to offshore NE FL. There's nowhere else for the atmospheric moisture to go, therefore it heads northward along the trough & ridge. This rain pattern is also called "training". Not as in being trained to do something, but as in going over the same area storm cell after storm cell like a train's cars do on the tracks until it passes entirely. We've been dealing with it for days now, since last Friday I think, at least (correct me if I'm wrong, fellow Floridian ATSers)

As for it turning in to something, I highly doubt it. The upper level wind shear is too high. That's not conducive to development. That's not to say it won't be a lonely low wandering over to TX, but it's got very low odds (10% maximum) of developing in to anything else.

Here's the TWD on the Gulf from NOAA:


GULF OF MEXICO...
AN UPPER TROUGH COVERS THE GULF N OF 21N W OF 88W EXTENDING FROM
AN UPPER LOW OVER THE MISSOURI/KANSAS BORDER AND SUPPORTING A
SURFACE TROUGH THAT AT 04/0300 UTC EXTENDS INTO THE GULF OVER
MOBILE BAY ALABAMA ACROSS THE MISSISSIPPI DELTA ALONG 29N90W
24N92W TO THE BAY OF CAMPECHE 20N94W. ISOLATED SHOWERS/
THUNDERSTORMS ARE POSSIBLE WITHIN 60/75 NM EITHER SIDE OF THE
TROUGH. AN UPPER RIDGE EXTENDS FROM THE YUCATAN PENINSULA ALONG
24N85W TO ACROSS NE FLORIDA INTO THE W ATLC AND IS PROVIDING
DIFFLUNCE ALOFT TO GENERATE SCATTERED SHOWERS AND POSSIBLE
ISOLATED THUNDERSTORMS E OF A LINE FROM S MEXICO NEAR 20N97W
ALONG 21N92W 25N88W TO THE N GULF COAST NEAR 30N87W. THE SURFACE
RIDGE OVER THE ATLC BASIN IS BEGINNING TO SHIFT W INTO THE FAR E
GULF. SURFACE TROUGH WILL SHIFT W THROUGH FRI TO OVER THE W GULF
THEN WILL MOVE TO ALONG THE COASTAL PLAINS OF MEXICO SAT. WEAK
SURFACE LOW MAY FORM ALONG THE TROUGH BEFORE IT MOVES INLAND.

posted on Jul, 4 2013 @ 04:16 AM
link
Glad to see the wet stuff. I really haven't seen rain like this since the early 90' s and before. We have had SO many years with below average rain fall! It's a change for the better and I hope everyone stays safe.
Quad