watch all the pigs polka

independence = in the pen dance

'there are none so enslaved as those who believe they are free'.

In their styes with all their backing,
They don't care
What goes on around.
In their eyes there's something lacking.
What they need's a damn good whacking.

Everywhere there's lots of piggies
Living piggy lives.
You can see them out for dinner
With their piggy wives.
Clutching forks and knives to
Eat their bacon.

why is miss piggy from the muppets so famous?
why is napoleon from animal farm a pig?
why are policemen called pigs?
why don't jews eat pork?

posted on Jul, 3 2013 @ 07:33 PM
link
charles manson believed that the Beatles spoke to him through their lyrics, especially those
included in the White Album, released in December 1968.

Manson interpreted "piggies" to mean members of the Establishment. He saw the song as
telling him that the Establishment needed "a damn good whacking." Manson frequently quoted
the line referring to the need for a "whacking."

•Despite its jovial tone, "Piggies" is one of the most lyrically controversial Beatles tracks, depicting as it does a series of cannibalistic "pigs" in "starched white shirts." Though "pig" was pejorative '60s slang for a policeman, a term which survives today, Harrison was always adamant that the "piggies" in question were representative of upperclass society, referring to the song rather obliquely as a "social comment." ("Pig" was also in common usage at the time as a way to describe anyone that was power- or money-hungry.) Notorious cult leader Charles Manson, who led his followers to commit a series of grisly murders in 1969, reportedly became convinced that "Piggies" was one of a series of White Album tracks instructing him to instigate a race war against the power elite. Indeed, the murderers wrote the word "piggies," as well as other lyrics from the album, on the wall in their victims' blood.
•Harrison may have literally had the last word on the meaning, however, with the original fourth verse. It wasn't used in the released version, but is present in the demo and was included in a number of Japanese live performances in 1991:

Everywhere there's lots of piggies
Playing piggy pranks
You can see them on their trotters
At the piggy banks
Paying piggy thanks
To thee pig brother!

who are the pigs that play in their pens and dance?
and again, why pigs?

edit on 3-7-2013 by TopsyTurvyOne because: added latter quote and link

you have never seen so many laws getting changed as now .

who is running this farm them or us its the pigs

posted on Jul, 3 2013 @ 08:24 PM
link
why do human beings and pigs have so many close affinities?
pigs are known for their intelligence.
pig insulin is used in place of the human variety for those with diabetes.
looking at those two piglets showing in the OP. i almost mistook them
for children, at first glance.
i imagine that if you stand a young pig up on its hind legs, you would can observe
something uncannily akin to the human buttocks.

is there a possibility that humankind is the result of the genetic manipulation
or crossing of pig and ape dna, and that some know this clearly?

Originally posted by TopsyTurvyOne
why do human beings and pigs have so many close affinities?
pigs are known for their intelligence.
pig insulin is used in place of the human variety for those with diabetes.
looking at those two piglets showing in the OP. i almost mistook them
for children, at first glance.
i imagine that if you stand a young pig up on its hind legs, you would can observe
something uncannily akin to the human buttocks.

is there a possibility that humankind is the result of the genetic manipulation
or crossing of pig and ape dna, and that some know this clearly?


you get any sharper lad you will cut yourself ever wondered why some will not eat pork ?.

mushrooms keep them in the dark and feed them on xxxt

posted on Jul, 3 2013 @ 08:39 PM
link
While I am not trying to figure out your thread...Here is the best song with Pigs in the title...
In line with your thread though the record this song comes off us has a pretty deep message\theme to it..


It's easy to become perplexed by the sadness of seeing
how perfect this world was made to be for us. But there is hope
in knowing this world that imprisons us. Was not meant to be.
And it will pass.


I'm not sure why...but your post made me think of the insult schweinhund, or calling someone a pig-dog. It's not just a German insult, it's a common insult used across multiple (presumably) unrelated cultures. I always thought it was weird to call someone a pig or a dog as an insult.

Maybe you're on to something with your pig + ____ DNA admixture of the human race. Intriguing, and a little disturbing. I think science still has to explain how, as apes, we lost our fur in favor or hairless skin and sweat glands etc.

But since we're on the Beatles theme. Here's John Lennon from the inside sleeve of Imagine. 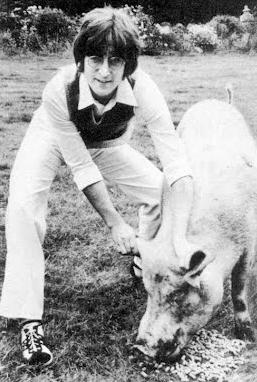 edit on 4-7-2013 by NarcolepticBuddha because: (no reason given)

posted on Jul, 5 2013 @ 11:54 AM
link
I once read somewhere on ats that indonesian cannibals or something like that referred to what they ate as long pork or walking pork because humans apparently have the same taste, also there has been talk of pig heart transplants working in humans.

secondly in the bible when Jesus cast demons out of a man, when they exited his body they then entered a herd of nearby swine, who then proceeded to run to they're deaths off a cliff into the ocean. makes you wonder what it is about us and them that were able to be possessed, DNA maybe?.

thirdly, Trent Reznor of the band nine inch nails bought the Tate le Bianca murder house of the Charles Manson followers murders and recorded music there. here are a few tracks that pertain to this thread "march of the pigs" and "piggy"
edit on 5-7-2013 by hopethishelps because: fixed link
edit on 5-7-2013 by hopethishelps because: (no reason given)

Depicting Jews – and sometimes also Zionists – as "the descendants of apes and pigs" is extremely widespread today in public discourse in the Arab and Islamic worlds.