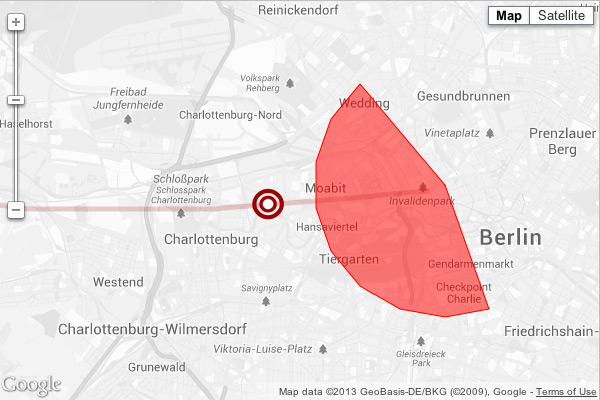 Green party politician Malte Spitz sued to have German telecoms giant Deutsche Telekom hand over six months of his phone data that he then made available to ZEIT ONLINE. We combined this geolocation data with information relating to his life as a politician, such as Twitter feeds, blog entries and websites, all of which is all freely available on the internet.

By pushing the play button, you will set off on a trip through Malte Spitz's life. The speed controller allows you to adjust how fast you travel, the pause button will let you stop at interesting points. In addition, a calendar at the bottom shows when he was in a particular location and can be used to jump to a specific time period. Each column corresponds to one day.


With just six months of T-Mobile data, a detailed examination of one's life is possible. Imagine cross-referencing this with the additional data known to be in the NSA's possession such as browsing history for both mobile and broadband, as well as the meta-data of the people you call, and that of those who call you.

Just out of curiosity, how easy would it be to write a program that would search his Meta Data for key words? Then cross reference with any others he connected with?

ETA: I see, its not actual conversation, just where he was and number of calls.
edit on 2-7-2013 by intrptr because: Spoke before reviewing link.


It would be an extreamely easy algorithim to do both. Once data is stored in an organized pattern, looking up, compiling, and comparing said data is simple. Any entry level programmer could then theoretically have the ability to "stalk" anyone who's meta data becomes public...
edit on 2-7-2013 by LeaderOfProgress because: spelling

So how then are they tracking everyones specific conversations?

Pattern matching the meta-data can yield much faster, much more reliable results than trying to apply natural language analysis to the actual content of calls, emails, texts, tweets, etc.


Thanks for that link to your post. That was revealing. I have always wondered why people want to carry a tracking device on their person. That is what a cell phone is, after all.

Thats why I don't own one. I know where I am at all times, thank you very much.

posted on Jul, 2 2013 @ 01:10 PM
link
The thing is with just the meta data its easy to find people who keep 'bumping' into a target as if the target gets a train from x to y every day and someone else does the same thing they will be able to look at that person as well without having to spend time following someone taking photo's of them and trying to work out who they are etc when it can all be done with a push of a button and also as quickly discount them if its just someone using it for work

posted on Jul, 2 2013 @ 01:35 PM
link
Thanks for this link, Skeptic, because it really confirms a lot of my suspicions that I've long held about cell phones. I'm one of those rare people that has never owned a smart phone (I say that I'm not that "dumb") and only used a "burner" cellphone for about 6 months out of necessity because of my particular schedule (had to order pizza some evenings for the kids lol). With all the disclosures, even with the use of a burner phone, I know that my geolocation data was still available because I used my bankcard (financial data) that would directly associate that phone with me through the acquisition of minutes. Being able to move about freely is a right and tracking one's location is an abuse of that right. It's as simple as that. Some may "check in" to places to advertise their every step for the public via facebook but that's just not my cup of tea.

From what I have seen "out there", however, it may not even matter that I don't own a cell phone. That's the kind of chilling thing. I've seen cameras stashed up on rooftops pointing down to the street level in my city. Counted 6 covering a major transit hub in the middle of downtown while waiting for the commuter train one day because I had nothing better to do than look around. There is overt surveillance in and outside nearly every major store that I shop in. Every time I use my bank card, that's where I'm at. When I drive down the road, there are cameras at major intersections that will snap a picture should I run a red light but who is to say that those aren't always recording anyways? Heck, there are mannequins on the market and in some stores that are equipped with hidden cameras to watch and assess the shoppers passing by using facial recognition technologies. Tracking really could very well go beyond cell phone, financial data and internet usage.

The only real differences between what is potentially out there today and the movie Minority Report is that we don't have anything embedded in our eyeballs and they make a point of not being overt about it (no directed advertising). However, IBM master inventors have already concocted and patented a machine that will identify you precisely the moment you walk into a store and assess whether they want you in or out and how they are going to market to you--even if it's making you want to leave the store. Here's to the future: www.google.com...


have you ever heard the story about how to cook a frog?? this is just one step closer.

posted on Jul, 2 2013 @ 03:21 PM
link
We all watched and let this happen to us, because every time when something new high-tech stuff is coming out we all run to stores and buy it , never think of consequences , and if we do we still say "ah what the heck "

posted on Jul, 2 2013 @ 03:24 PM
link
this is wild, and im appauled that these jerks can do such a thing, i want their records too then, i want to see where bush and all them were during 911, i want to see who was near the levy's when katrina hit, and id love to see alot of the stuff these dudes are up to via location. ugh sickening.

posted on Jul, 2 2013 @ 03:46 PM
link
Metadata isn't new, what do you think happens to all the inventory control programs in grocery stores.

Product A sells out almost as fast as we can stock it. Better order more a bigger bulk.
Products V through Z are popular with the ethnic market, and our store is located in a heavy ethnic region. Stock up and present new and similar goods.
Product D sells only a few items and expires on the shelf more often than not. Cancel further shipments.

It's in marketing all the time, same with how websites use cookies or Google uses adwords.

Not all metadata should be considered bad or even worrying.

Originally posted by Moshpet
Not all metadata should be considered bad or even worrying.

Motivation is the key here. I don't care about some website gathering this data about my visits to their site, that's fine. This is no different to the shop owner watching people coming in and looking around.

Amazon doesn't have the power to combine their site meta data with political opinions, medical history, address, phone number, SS number, family members, Google search history, sexuality, criminal record, Facebook activity and so on and so on, and they certainly don't have the power to pick out anyone from a crowd and silence them, persecute them, kidnap them and torture them.

I know you were probably not intending to compare the two (government and private businesses), but I feel the need to make this point whenever I can see the potential for that ridiculous statement of "companies know more about you".

Originally posted by 0bserver1
We all watched and let this happen to us, because every time when something new high-tech stuff is coming out we all run to stores and buy it , never think of consequences , and if we do we still say "ah what the heck "


Technology isn't the problem here. The problem here is that we allow our government to do things like spy on us, because it "makes us safer from 'terrorists' ". We refuse to require that the government stay out of our private lives without a damn good reason, and hold accountable the government and those companies that go along with it. Besides some news articles, what has been the actual fallout of this event in the US? Pretty much nothing. That's the problem.


Originally posted by Moshpet
Not all metadata should be considered bad or even worrying.

Motivation is the key here. I don't care about some website gathering this data about my visits to their site, that's fine. This is no different to the shop owner watching people coming in and looking around.
/snip


Actually, I'm more inclined to worry about a corporation abusing that information than our Government.
Unless you are among the 1% who are crazy enough to commit violence against the Government, odds are you don't even ping their radar. (Much less the 5% of you (over all) who might express a public opinion on the governments actions.)

Take Monsanto for example, recently they bought up a mercenary corporation. (IIRC it was Blackwater.)

Seeing how I don't much care for Monsanto, or their practices in politics, I have to wonder why a corporation would need it's own group of mercs. Is it their next big power play? Or is it because they know the fecal material is going to hit the impeller over one of their products and they want a way to get out of the country alive?

I don't fear our Government, I can pretty much guess which way the coin will flop as by who is doing the coin flipping.
But the Corporations do not allow us to even remotely see what they are doing, much less what strings they are pulling.
There is no FOIA with a corporation.