You sir clearly do not understand how academia works...

There are plenty of examples in history about how credentials, reputation and politically correctness (due to the need for pulling the grants) prevents and blinds science. On only that but direct political intervention to suppress information...

Then there is the reversal of the coin, the need to publish and stay relevant often generates trash and promotes bad science. Its like the news people get what they pay for and what keeps the audiences up, this is our culture today, that is why people look at the Victorian era (~ 1800-1920) as the golden age of innovation, today we rarely innovate we improve and are constricted into a box of economic interests and fake morality and ethics. Granted that errors were made but people did have freedom to explore and challenge the mainstream.

PS: I fully recognize that the easier discoveries are mostly done and innovation today costs a lot more and is more difficult. But you need only look on how we have yet to explore our oceans, properly catalog and preserve biodiversity, find better social and urban system and get out of this blue marble into the vastness of space to see how even some of the "simplest" needs fail to be met...

Are people really that stupid they think an object the size of Jupiter next to the sun would be missed by the 6 billion pairs of eyes on the ground??

What you see is an artifact, LASCO is old, it was built in the 1980s.
The circles you see in some of the images, yes circles, not UFOs!! they are caused by the electronics box. There has never been a firmware update, since it was judged as too sensitive changing the flight-software.

Other things observed and labelled as UFO's are simple telemetry dropouts, disturbance in the data transfer...these are the white and black spots that appear sometimes.

If only you guys spent the time educating yourselves on the subject, instead of looking for things you dont understand, maybe the UFO scene wouldnt be such a joke!!


That is a defect in the camera lense. I noticed it a few years ago myself.

I don't see how any of that applies to my comment.

If you've ever watched any of those videos you'll see tons of streaks going by.

That could be space rocks, comets or dust.

If it's in more frames then it begs investigating.

Originally posted by Whateva69
This happened about two or three weeks ago, i didn't record much of it in my notes, mainly because i couldn't see any great significance with this visit. then i watched this, and i was like what if it is related to this event, i dont know but i decided to share with you guys anyway.

My husband and I were both asleep, i woke to see a bright blue and purple entity just floating about, i started jabbing my husband in the side telling him to wake up, their here. i jabbed and poked at him about three or four times pretty hard, he wouldn't wake, he wouldn't even move.

I found this pic on the net that resembles the alien entity that i saw, i don't know how i knew it was an alien, i just knew, maybe i knew them before but just cant remember. 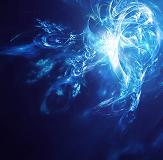 I was kneeling up in bed now, facing the entity, it started blowing up a balloon, it floated towards me and i reached out and grabbed it, i was so excited, i actually had some proof. they blew up a second balloon, i watched it float towards the window, i got up went over to the window and looked out.

There must have been some kind of filter on the window, i could see the sun, i could see the red waves all over it, at the top right there was a coronal mass ejection, but get this there was a planet next to the sun, now the sun is pretty big, and this was pretty big compared to earth and her moon. now here is what i cant remember, i dont recall if the planet was in front of or behind the Sun. 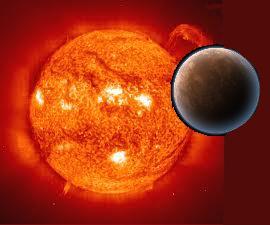 Even though the visit was short it was pretty cool. oh and when i woke up in the morning i pulled the whole room apart looking for balloons, not a balloon anywhere

Love and harmony
Whateva
edit on 25/5/13 by Whateva69 because: oops vid


I have been watching this object for weeks. It is not moving so it must be in the camera lens or electronic in nature. It is interesting in that you can see CME material in front of the object and that is what makes it look like a real object. Of course if it does not move over the course of 2 weeks it is not any kind of real object like a planet or it would have moved by now. It is a strange sensor artifact. We should launch some replacements for the STEREO satellites since these seem barely functional at this point.

All they have to do is obtain a solar orbit equal to the Earth and then just get left behind until they are on orbit near the original satellites. It is a low energy expense launch since it is basically getting left behind in our wake.

Surely if it was beside the sun the side where the arrow is pointing would be in darkness, light would only shine on it from the direction of the sun. 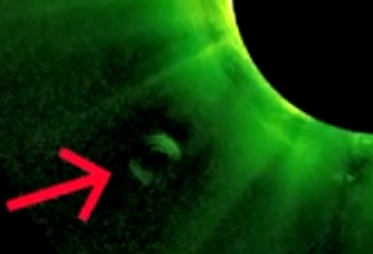 It would not have light reflections on both sides.


post by DelMarvel
.. all the scientific experts working on the project are keeping quiet and allowing armchair laymen to be the first to announce the discovery

You sir clearly do not understand how academia works...

and explained why your view of the issue is/was not correct...


And your point? That no expert working on this project is going to come forward about a giant object next to the sun (an object that would actually be visible with the naked eye from earth but never mind that) because they're afraid of ruining their academic career?

Pretty ridiculous on the face of it.


Not at all look on the ESA information regarding Phobos or even the Moon (and the rumors around it).

Have you heard the theory about the naked monkey ? or why we are the only primate that has webbed fingers and a layer of fat in the skin ? There are many not so out there theories and proposal that simply don't get traction. Look to the debacle surrounding the finding of "presumable" life in Mars...


Not trying to nit pick but the image of the object as seen from the STEREO-B satellite is not in line of sight with Earth and an object this close to the satellite if it were there would be outside of Earth view. The object is likely a lens or camera defect but still your premise that it should be visible from Earth is just incorrect.

The object if it was real and not an artifact of malfunction in the instruments of the satellite would place it about at the point of the green dot in the image above. It would be directly out of sight of the Earth observatories.

Any large planet or artificial object the size of a planet in orbit around the sun would have moved in the time that it "appeared" into view.

As evidence here are Mercury and Venus moving across the view of SOHO taken in just 3-4 days and look at the speeds they move.

A larger object closer to the sun would be moving faster, this is a camera malfunction/aberration/damage or even possibly another coronal hole. It is not a planet or planet sized object.
edit on 3-7-2013 by abeverage because: (no reason given)

posted on Jul, 3 2013 @ 10:36 AM
link
think of how lenses can zoom in and zoom out. actually the best example is one of those retractable telescopes, the image that appears here almost looks like the inside of an extended telescope or high zoom capability camera (which we have here) but in the perspective of looking down the length of it rather than from the side, so head on. sparknoes: IMO it seems as if it is a reflection of the inside of the camera caused by an unknown anomaly

Are people really that stupid they think an object the size of Jupiter next to the sun would be missed by the 6 billion pairs of eyes on the ground??

I don't know why some adults on this site can't seem to have a mature converstion without resorting to high-school like behavior. Take responsibility for your actions and foster an environment on ATS where we all feel free to ponder and discuss the events, science and news of our time without judgement or scorn.

I think the OP has stumbled onto something interesting, if this is a common artifact has it been seen before?

Where is the arm that holds the sun blocking disk in place? You're gonna have to throw that back into your editing software... 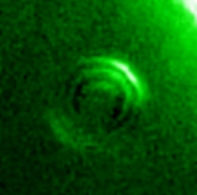