posted on Jun, 29 2013 @ 09:11 AM
link
MANKATO, Minn. (AP) -- The two towers of a high-rise dormitory at Minnesota State University-Mankato are coming down this weekend.

The 12-story towers of the Gage Residence Community are set to be imploded at 9:30 a.m. Saturday, after a speech from the university's president, Richard Davenport.
hosted.ap.org...


I live not too far from these dorms and I think its going to be pretty exciting to watch. You can check it out livehere

Apparently they don't need any planes for this one, just 650 holes drilled and 300 pounds of dynamite at a cost of roughly 2.8 million dollars.

I thought some people might be interested in this and could possibly compare to 911 on a much smaller scale. I'll be close by so I get to see it in person.

A little more info on the demo: Neighbors Briefed on Gage Demolition

Was your title deliberately written to sound like a 9/11 conspiracy?

Apparently they don't need any planes for this one, just 650 holes drilled and 300 pounds of dynamite at a cost of roughly 2.8 million dollars.

Dam thats expensive. Apparently all you have to do is create a small fire over 2 floors for 90mins and the entire buildings will collapse into their own footprints. Well.. that's what the American government says anyway.


Exactly, Goverment science claims that all they would need is Kerosene type jet fuel and the building crumbles into dust. They would need to be very careful though because this method is also known to affect surrounding buildings up to several hours later. WTC 7 for example.


I thought some people might be interested in this and could possibly compare to 911 on a much smaller scale.
We do have examples on a smaller scale. Take this image for example: 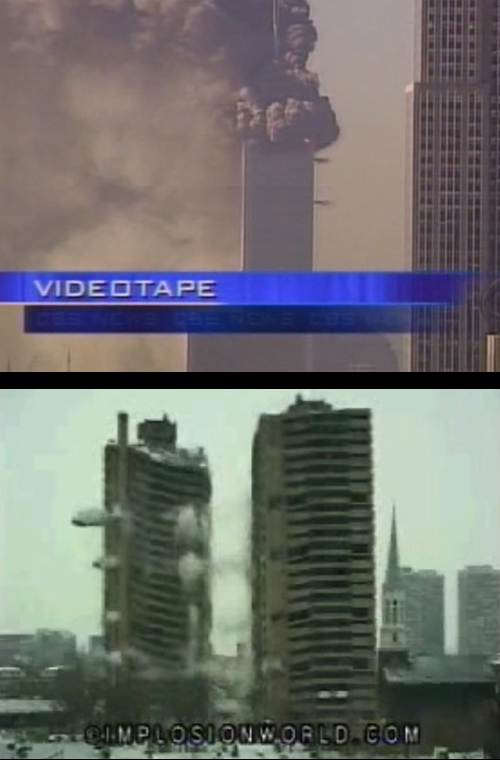 You can see the dust/debris from the high-powered explosives being detonated in both images. You can also see that the explosives were detonated from the top down in the apartment buildings on the bottom, just as they were in the twin towers.


(Hoping people don't turn this into a 9/11 debate. Just noting the similarities.)

I watched it from my friends third story apartment window about 8 blocks away and it was pretty cool. Never seen one up close before.

I'm pretty pissed though, cuz I heard from quite a few people that the live stream didn't work. So the college are the ones who are in fact the weinies. Haven't seen any videos up on the net yet but its not the same as seeing it in real time. I feel kinda embarrassed, Sorry guys


I feel kinda embarrassed, Sorry guys
No need to be sorry. You had nothing to do with the live stream not working. It was out of your control.

Unless you deliberately sabotaged the live stream.

textbook. right into it's own 'footprint'.

Was your title deliberately written to sound like a 9/11 conspiracy?


Except when there's 3000 or so innocent men, women and children sacrificed to the altar of the M.I.C.

Plenty of wicked, not so much of a rush.

The two images are very similar.


Yeah but this is different. The twin Gage towers came down in their own footprint with not a whole lot of dust with only 300 pounds of dynamite. They were only 12 stories apiece, but that seems like a pretty small amount of explosives.

Yeah, I don't want this to be a big shill fest either, I was just hoping a bunch of college folks could properly livestream an event properly. Really takes the wind outta my sails if I did want to compare to WTC.

MSU-Mankato is more noted for its law enforcement program than IT, so go figure.

I thought it would be cool to share had they had their act together.


The comparisons are only going to be reflected in the physics and forces operating on the building, not necessarily in the explosions from the charges.

The trade centre three were brought down with far more advanced demo charges than the TNT used in this demo.


Funny you used a screenshot from implosionworld.com, as they wrote a paper about the towers collapsing back in 2006;

An excerpt for your perusal: 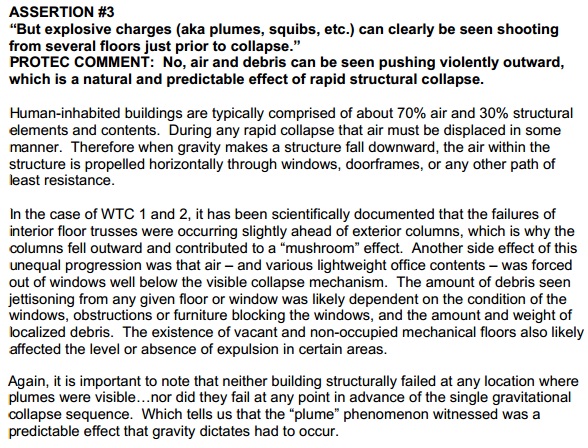 I'll go with the experts on this, my friend.


You can also see that the explosives were detonated from the top down in the apartment buildings on the bottom, just as they were in the twin towers.

Actually, they were detonated at the same time, as you can clearly see in the video:
(Skip to 4:54)


The problem i am having is with this claim.


n the case of WTC 1 and 2, it has been scientifically documented that the failures of interior floor trusses were occurring slightly ahead of exterior columns, which is why the columns fell outward and contributed to a “mushroom” effect. Another side effect of this unequal progression was that air – and various lightweight office contents – was forced out of windows well below the visible collapse mechanism. The amount of debris seen jettisoning from any given floor or window was likely dependent on the condition of the windows, obstructions or furniture blocking the windows, and the amount and weight of localized debris. The existence of vacant and non-occupied mechanical floors also likely affected the level or absence of expulsion in certain areas.

This is exactly the same similar excuse they used for WTC 7.


Funny you used a screenshot from implosionworld.com, as they wrote a paper about the towers collapsing back in 2006;
Yes, I know about that paper. It was debunked. Just take a look around Google and you'll find other papers contrary to Protec's biased assertions.


I'll go with the experts on this, my friend.
Except these "experts" you hold to such high standards, are actually feeding you a line of BS propaganda.

PROTEC COMMENT: No, air and debris can be seen pushing violently outward, which is a natural and predictable effect of rapid structural collapse.


This is an absolutely false and baseless claim with zero evidence to support it. The claim is mooted by the fact that isolated ejections, like the ones visible in the image I posted earlier, have only ever been observed in controlled demolitions as a direct result of high-powered explosives being detonated.

Those isolated ejections have never been observed in any other type of collapse outside of explosive controlled demolitions.

For Protec to assert that isolated ejections are a "natural and predictable effect of rapid structural collapse" without any evidence whatsoever (none exists), is not very "expert" of them.

Part of the problem is too many people blindly "go with the experts" on such topics without doing any research on their own. It's quite bothersome when someone "goes with the experts" who make baseless and unprovable claims, all to keep remaining in denial.


Isolated ejections, explosions (booms), and flashes going "up, down and around", together are all consistent and specific to controlled demolitions, and all of which were observed at the WTC on 9/11. None are consistent or specific to natural collapses, nor fire-induced collapses.

Had they been detonated at the same time, the ejections would all be at the same stage. But they obviously are not. And I don't know what game is trying to be played by claiming something that's absolutely contrary to what is visible in the still image.