Here is another medal on the chest of FSA and it's supporters.

Vatican news agency on Tuesday quoted head of all Franciscans in the Holy Land and Custos of the Holy Land in al-Quds (Jerusalem) Pierbattista Pizzaballa as saying that father Murad decided to be a hermit and resorted to the monastery few weeks earlier.

Custos of the Holy Land said that gunmen entered the monastery and looted all of its items before killing monk Murad, the Syrian Arab News Agency reported.

"The world must know that supporting the gunmen by the west help extremists kill the Syrians", Pizzaballa said, adding, "With such stances, not a single Christian will remain in the East."

I really thank god that I am not born there. I pray that god grant patience to the people who are witnessing this.

This is most savage.

FSA kills two women and throw them in the hole

here are the old videos

I recommend people don't watch the videos much

posted on Jun, 26 2013 @ 04:09 PM
link
sick when even holy men are not safe those people are animals assad and his brutal regime at least kept the place together like with hussain

Ahh !!!! I am sure if someone asks the rebels they would say "we are cleansing the earth from polytheists"
media are pretending that those terrorists (including Osama and Taliban) are muslims, while most of their targets are muslims.
I could never imagine such great hypocrisy and barbarism in the 21th century. surely governments have a great responsibility.

posted on Jun, 26 2013 @ 04:28 PM
link
It's sounding more and more like the Contra Rebels from the Reagan years. They too had gone into rural churches to loot and murder inside the Sanctuary itself. Nothing much bothered those guys. Why should it have? The whole force of the U.S. was behind them and they knew it. They could do whatever they wanted and who on Earth would stop them if we backed them?

So it was then...so it seems to be now. Rinse, Wash, Rename and Repeat.

I guess when Obama has continually compared himself to Reagan and how much alike they were .... He meant it in ways he figured was an inside joke or something. Yeah... I see the similarities alright. Far too many.

does anyone compare himself with Kennedy !? maybe it does not worth, because of a probable assassination.

instead of looking at the issue, which is the criminal FSA thugs raping, looting and murdering Syrians while the West point the finger at Syrian Government, you jump over and drag Assad and his 'regime' as you called it, yet you overlook the fact that Syria almost paid off all her foreign debt under Assad, her GDP grew significantly, it was modernizing and becoming a tourist hub with thousands of flights daily across the country and millions if visitor annually. Syria is secular and tolerant society, christians, muslims, druze, kurds, and other minority faiths co-exist and prosper peacefully. The levels of unemployment was slashed in half, and as a collective society the Syrians were moving forward.

A small minority of muslim brotherhood, al qaeda sympathizers and salafi troublemakers were subdued and kept under control, until the so called Arab spring came along and NATO along with the Arabs spearheaded a false freedom movement that has exposed itself to be nothing more than terrorist foreign islamist coup, bent on destroying Syria

Assad took power in 2000, Later he was dubbed 'The Hope', many political prisoners are freed, and political parties legalized, talks begun with the SSNP to form greater Syria, to unite Iraq, Syria and Lebanon. Which would become a regional power

Syrias GDP, note what happens when Assad takes over, 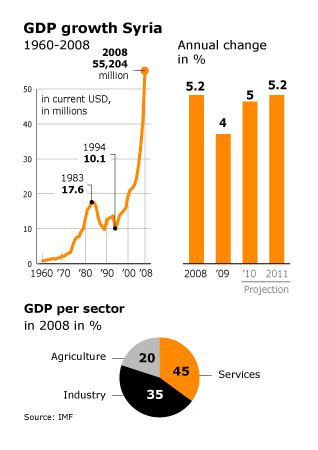 even today, some ignorant nincompoop comes along and blabs how Assad is an evil guy who oppressed his people, comparing him to Saddam Hussain is the bigger joke, Hussain never let Iraqis leave the country, Iraqis couldnt travel under Hussain

Yet Syrians under Assad can leave the country any day!

at least with saddam and assad the country was not a basket case bomb site all religions were safe .i wonder who is arming the kurds and telling them dreams of your own country

i was being ironic when i said the brutal assad regime when you hear him on t.v you know this guy is calm

at least with saddam and assad the country was not a basket case bomb site all religions were safe .i wonder who is arming the kurds and telling them dreams of your own country


I do not ignore that Syria needs a political reform but Assad is not comparable with Saddam. Assad is the main part of resistance against Israel's avarice. but Saddam itself was a puppet. it is a fake. neither Egypt nor Tunis overthrew their puppet regimes by wars and foreign terrorists. collapse of Assad will lead to a disaster for our world, a governing of terrorists and human eating zombies !!! I do not know why some so called civilized western governments can not perceive this !?

let me guess, someone will show up and post a link to the "real" rebels decrying this act as not perpetrated by them.

just like with all the other heinous acts committed over there (and made possible with weaponry from the west), they will say "it was a rogue group, not the real FSA".

this is an exact repeat of what we did to get the panama canal. we funded and supplied rebels to overthrow the country because the leaders of the sovereign country didn't want the canal.

i was being ironic when i said the brutal assad regime when you hear him on t.v you know this guy is calm

where is the irony in this?

clearly you think Assad is a blood thirsty, power hungry,oppressive dictator which terrorizes his people and steals the country's money for himself, because thats what saddam hussain was.

Assad is not perfect, but by far he is the best Arab president in the region


And when you ask western people about Islam , they point this western new fake sect of Islam.

Originally posted by bigyin
That the West is supporting these bastards is truly horrific.

Don't read this then

Hate for it to get in the way of dogma


On another note will we see any riots in the streets in the west over the murder of a monk?

They are at best western puppets.It is written on their head.UAE , SA , Q and J are dictators which are feeding western mouth to stop telling that they are dictators.

And Turkey is the western puppet which has been support west for so long. They are allies of Israel and they do whatever US tells them.

But I have no comment on Egypt because I haven't heard that they are supporting terrorist groups.


But I have no comment on Egypt because I haven't heard that they are supporting terrorist groups.

All Countries in the Mideast supports some sort of Terrorism,by Proxy or outright.

I don't understand why you have written Qods as your location ?