The guy was cheating, she cleaned the floor with her and threw her down the hill.

Great style, I must say.


Now THAT is badass. Should have thrown the dude down there though. I mean what a grade A twit! I can understand the motivation to hurl ones rival in that scenario, off of pretty much any high place, but its not the lass who caused the man to cheat.


Well,.... knowing the area, best to do would be hide all the scissors at home and stay awake tonight.


Nah....she left walking at the end of the video.

Originally posted by Trueman
reply to post by VoidHawk


Well,.... knowing the area, best to do would be hide all the scissors at home and stay awake tonight.

posted on Jun, 24 2013 @ 08:02 PM
link
reply to post by Trueman
I think both of the women should have worked together and thrown the cheater off the cliff. My first husband (very short marriage) was cheating and the poor girl didn't have a clue that he was married- that lady probably didn't know the man was already spoken for.

posted on Jun, 24 2013 @ 09:16 PM
link
It takes three to cheat. Two willing to get together outside of 'marriage' and one who thinks they can ever own another person.

So does the woman who committed assault and battery think her marriage is now somehow safe? Is this how you make yourself an attractive life partner?

Yup, I'm sure every man in the country is now really looking forward to being involved with her...


Who cares what he thinks of her? With hope she's left him. Screw pow to the Moon! Bam, off the cliff!

Very true-no one put a gun to some one's head and forces them to cheat.I always wonder why people who were cheated on by their partner blames the 3rd party,whatever the relationship's sexual orientation or legal status.If your partner wishes to be faithfull-they Will be.If my husband had to cheat,i would be taking a long hard look at our relationship with each other,and at his conduct,not having murderous thoughts about the other woman.True,i would'nt be feeling very charitable towards her,but if i knew for a fact through serious and honest introspection that i was not at fault in my relationship with my hubby-she may well have been doing me a favor by being instrumental in showing me i was married to a jerk.

If you are doing all you can to keep your relationship healthy and happy,and your partner still cheats-maybe you are better off without such a person.No point taking it out on the 3rd party-if it was'nt That person your partner cheated with,it would have been another.

Originally posted by Hushabye
reply to post by signalfire


Who cares what he thinks of her? With hope she's left him.


If she depends of his paycheck, she won't leave him. She was fighting for her income source, it isn't about love.


how did you come to this conclusion ?


I was engaged to this girl once, and she went on a couple of little girls weekends away with her female cousin. I had been working during this period, every day, earning money trying to get us a place to live of our own. I guess I was about eighteen years of age...

I got back to her parents place after work one night, and she arrived home with this big fat dude from Norfolk in tow. Her cousin was looking at me the way I imagine people used to look at the condemned, before they took the last fall. My fiancee takes me aside, and explains that she is with this dude now. I dont know if the look on my face changed, or what, but the dude (bear in mind, I was eight stone nothing at the time in weight) starts backing away from us. I turned away, went and packed a bag upstairs.

By the time I had packed my bags, they were cosy on the couch together (awwww, bless.) and so I waited for my ex to get off the couch and go an make a cup of tea, and I walked into the darkened living room, behind the couch and said "Hey." and the fellow literally jumped out of his skin. I said to him " Calm down. I am just here to wish you, the very best luck." and I reached out my hand, and we shook, the whole while he was looking at me as if I was about to kill him.

I was just angry though. I meant him no ill will, I was just sick to my guts with the idea that she would go off like that. As it turned out, he revealed himself to be a prize bastard later on, when he got her pregnant and then ran off with a petite blonde chick, leaving my ex with his child to deal with. Karma is a female dog huh?
edit on 25-6-2013 by TrueBrit because: detail addition.

Right. As if the laws are strictly followed in that region Hell even with the laws folks commit serious crimes in the US. Its the instincts/human nature that takesover. Very powerful. 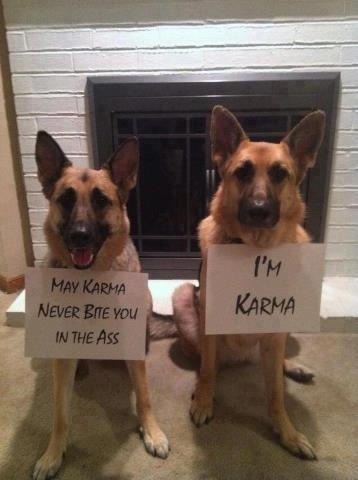 You were best off without her then,TrueBrit.