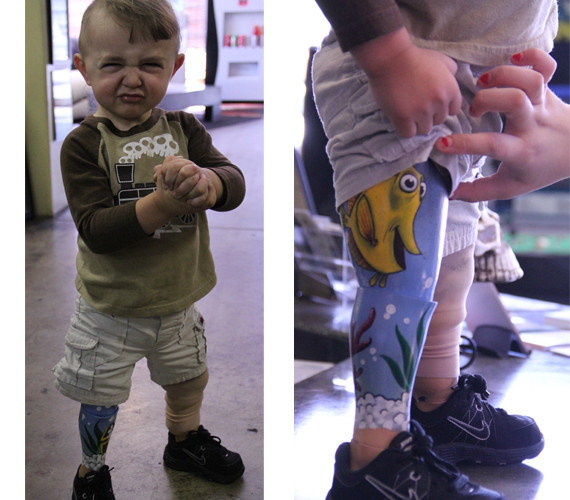 Lucky kid. I could actually see other kids being jealous of him.

Mind you, for anyone not reading the source article, it's not a real tattoo. It was put on to his prosthetic leg. The boy was born with a condition which made him an amputee.

I'm kinda wondering why this hasn't been done more often. No reason to make people feel worse about their conditions than they already do. Something like this makes it almost barely noticeable, if not coveted.

Perhaps there's a new industry for tattoo artists in the beginnings...

Most 2-year-olds don't show up to preschool with a custom design from a tattoo artist on their leg. Logan Lansborough is just that cool.

He looks a proper dude too

I'm kinda wondering why this hasn't been done more often. No reason to make people feel worse about their conditions than they already do. Something like this makes it almost barely noticeable.....


A 2 yr. old with a full leg tat is barely noticeable? That would probably jump out at you, even with only your peripheral vision. It would probably cause it to attract attention, and cause many to give it a 'double-take'. On the other hand, most people probably won't even look directly at the plain prosthetic limb.

Don't get me wrong, I'm not saying there's anything at all wrong with it. I do like it, and think it's a good idea for some. I just don't think it would make the prosthetic device 'less noticeable'.

Won't that look really stretched out when his legs grow?


lol. You read only the title, and looked at the pic, didn't you? Try to spare about 20 seconds, and read the rest of it.