I was on a shuttle bus heading to the office, as the bus was just pulling into the McArthur Glen shopping complex I looked up to scan the clouds (as I always do) and spotted was I can only say was a cigar shaped UFO very slowly enter some low lying thick cloud.

I would say cloud cover this morning was at about 1000ft as we've had some stormy weather the past few days. There where huge patches of clear sky also, but some really menacing dark storm clouds and thick white dense clouds.

I spotted the UFO just as its front end entered the cloud from a light blue sky surrounding. Size and shape I would say where about the size of a 747 but with no wings. Its colour was pure white and at the end of the cigar on each side I could clearly make out 2 small circular spheres attached at each side. It very slowly, almost at stopping speed, moved in to the dense cloud.

Unfortunately my bus had to go round this massive shopping complex continuing on its journey and by the time it was round the other end (roughly 2 minutes) I had lost sight of it.

Now this cloud was quite large but had good visibility at either end so im assuming at the speed I seen it enter, if it had kept going I would have seen it exit the other side.

A few minutes later I was at my office with full visibility of the area for quite a few miles in all directions. I watched that cloud for close on 30 minutes but never seen anything exit. I did notice however that this dense whispy cloud was turning more grey and storm coloured by the minute.

I came close to having an amazing ufo experience and if I was not passing through this shopping complex when I spotted it initially I would have got a few snaps off of it with my I-phone.

Here is the goggle map location of my sighting:

and on googling cigar ufos, this is probably the closest render of what I seen this morning:

Keep looking to the Skies.

the strangest place i have ever lived was near the falkirk wheel it scared me to death 2 many weird things happened there for me .

posted on Jun, 24 2013 @ 12:31 PM
link
Hey billdadobbie, ive been into ufology, conspiracies and the paranormal etc for Nye on 35 years. Ive seen a lot of vids and read a lot of books. Tesla / HAARP sprang to mind once I sat watching that cloud for 30 minutes watching it change from dense white to dark and dangerous thunder. Seeding??

As for Livingston, well we do have the world famous Dechmont Law sighting in 1979, plus if you check my profile, this is my 3rd UFO spotted in Livingston over the past 35 years ( + a meteor! lol).

posted on Jun, 24 2013 @ 12:49 PM
link
i never lived long near the wheel it put the beejusus up me and my dog that area . but i do know what your on about with the cloud stuff one night as i was walking down to the wheel with the dog i thought i saw cling film floating .

above the trees i dismissed it at the time as the refinery was near and sometimes lit up the sky but next day when i went back i realised in daylight this blob ?? was big 20 + feet .

never been into the ufo forums here but what ever i heard one morning above my flat was not known to the public froze me to the bed .

still kick myself over that if only i had been quicker when i got home from work that night g/f said power in the street had been out all day & i still cannot explain that .

The meteor was round about 1994ish? big beast that hurtled past Falkirk then Livingston and nearly landed on my napper.

Through further research, id say it was probably the size of a grain of sand with a 2 metre ball of flames by the time it flew over me at 50ft


another scots man logging in, just a quick question, how do you know a UFO passed over your house, or have i missed something ?


another scots man logging in, just a quick question, how do you know a UFO passed over your house, or have i missed something ?


you have me intrigued now, what did it sound like, Here in Dundee at night, usually between 1am-3am you can hear a low buzzing / rumble, you can make out that the noise is moving, like an aircraft doing a slow forward moving turn, sort of a horizontal spiral, it has a fancy name that i can not get off of the top of my tongue, like when you see the RAF SAR helicopters looking for people in the water, they do that slow turning sweep.

It sounds like a Cessna engine, but muted, maybe at height, thought that it may have been a police plane or drone of some kind, looking for heat signatures off of roof tops, like the police do with their little spotter aircraft for cannabis growers, when i hear it i have a look but there is nothing to be seen, no beacon lights or anything.


Hey mate, interesting story and if it was genuine cigar UFO you seen then I reckon you should be feel privileged to have seen it.

A skeptic may try and throw "sure it wasn't a blimp you seen?" at you

Livingston is also on the flight path to Edinburgh airport, a blimp would never be allowed to fly that low or close to the flightpath.

Another thing worth noting, I viewed this cigar S/W of Livingston town centre. All planes taking off from Edinburgh westbound where banking hard North as soon as they got altitude.


sounded like something in a sf movie i froze to the bed it was that smooth and powerful like the engines in the matrix movies on the nebuckanezzer ? it was early just after 5 am no blimp though they use micro lights in falkirk cheaper and all the power was out in the street when i got home 9 hrs later
edit on 25/6/13 by billdadobbie because: (no reason given)

posted on Jun, 27 2013 @ 07:08 PM
link
Your rendering of the object seen above Livingston matches my own sighting which happened 3 summers ago over a park in Rutherglen, Scotland. I was watching the skies on a hot summer day when this object came into view at a very high altitude, I could not see any portholes but I noticed that it was white, cigar shaped, with no wings and had 2 circular objects at each end of it.

Could this have been a drone??? It is very strange that 2 people in Scotland have seen the exact same thing and at 2 different locations.

I don't think what I saw was a drone. It just very slowly moved into the cloud at pretty low altitude.

On observing the planes coming in and going out of Edinburgh since at the same location, they are a lot higher up when making the descent into Edinburgh from the height I seen this craft at and the notice in the difference in speed is night and day.

posted on Jul, 2 2013 @ 11:05 PM
link
have a look at filer files #25 on rense .com it states that this object was seen in australia argentina canada france yhe uk etc

posted on Jul, 2 2013 @ 11:26 PM
link
I believe you and am quite jealous.
I have never seen anything in the sky
I could not identify, and I'm really tired of it.
Because I know it must exist. The evidence is immense.
Congratulations again.

I wonder if anyone can figure the odds on seeing
what the person truly believes to be an Unidentified Flying Object?
You know, after really hashing it out , believing this object
appeared or acted in ways that defied logic.
Are we talking, being lightening struck numbers, or lottery winning odds?

posted on Jul, 3 2013 @ 05:21 AM
link
Is it possible that you saw an aircraft just as it passed behind a cloud? The only reason I ask is because I know Livingston quite well (my brother lives there), and airliners pass almost directly over that shopping complex as they arrive or depart Edinburgh Airport.


Lots of Scots on here, I wish when people make reports like this they would say what you have given ie time date location direction facing but also elevation of object above the horizon and approx distance and direction it was traveling as well, it is possible to see what aircraft were in that part of the sky at that time and date even now because I just had a look.

Now as I travel all over Scotland and North England and other parts of the UK I have flown in and out of Edinburgh airport and many aircraft fly over Livingston from all directions.

Most certainly was not a plane. As I said above, this thing was going at crawling speed entering very low lying cloud.

From where I saw the object, it was west of McArthur glen shopping complex and was heading South towards the pentland hills. Though as per my original post, once I got round the other side of the complex, I kept eyes on that cloud for 30+ minutes and never seen anything exit.

Staying in Livingston for 40 years, I know the flight paths well and the altitudes of the planes landing and taking off from Edinburgh.

I cannot re-iterate enough how slowly this object was moving.

Another thing I never mentioned in my original post is that from my house, from the 6ft lounge windows I can see the shopping complex on my right roughly a mile away and I have full visibility of the pentland hill ranges. I have been at the ready scanning the skies as frequently as possible so that I can capture this weird looking craft on camera.


On the 24th of June (not May in the thread title) the following flight
RYR16ML was flying over the Pentland Hills doing 237mph at 2250 ft. 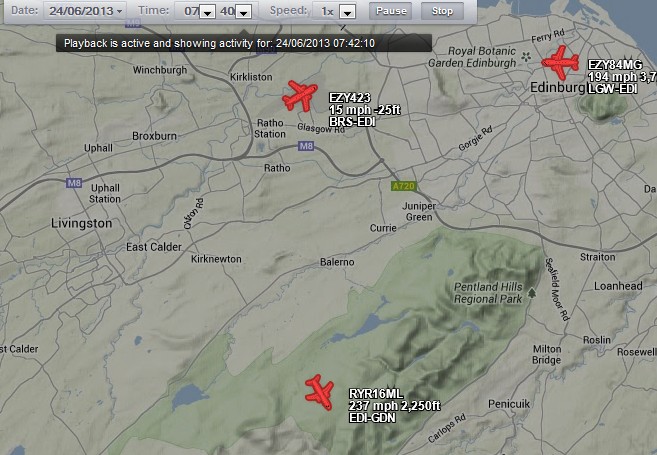 The direction and location you claim.