So why is 7-12 years so damn speciel this time?

Well, we are slowly creeping towards the point where the effects of the irrational post world war 2 baby boom will take its toll on the entire world population.
While America was fast at initiating the birth rate increase Europe took a little longer to follow after, so if the first "de-boom" wont finish off the economy completely then the second one will.

People who were born during the first baby boom in the late 40s early 50s are nearing the pensioning age. But that's supposed to be a great thing isn't it? Finally you can enjoy the spoils of a hard life… all that hard work for your nation, your family, your home.
The thing is, while we were so busy expanding and spending, we failed to acknowledge a very very simple fact:


…..and not only are we experiencing a declining birthrate. We HAVE BEEN for the last 60 years, with very slight increases here and there.

The ramifications of the ill advised baby boom in the 50s and 60s will be dire. This cannot be stressed enough.

Do some simple math;

Being born in 1950 means you would hit the working age / tax contributing life around 1971-1975. We are talking about THE LARGEST working force in the history of man hitting the streets looking for a job at more or less the same time ( give or take a few years ).

Of course society at first wasn't ready for this massive increase in labor ready hands and this reflected in the massive unemployment rates of the late 70s early 80s. But then, things turned around.
As the last part of the largest working force in time grew up, ready to contribute and consume, we suddenly saw a magical economic growth.
People don't really think about money as something that is totally dependent on people, but they are.
It's not like some economic genius invented the wheel and then everyone was saved.
No…. there were simply suddenly a LOT more people out there ready to work and consume.

Being a photographer I often here stories from the old timers about the golden 80s where you could charge outrageous fees while doing massive shoots with huge staffs and the obligatory party to end it.
It's a testament to not only how "good" things were, but also how completely blind they all were… I'm sorry, but you old timers born from 50-70 were blind.


So here we are, close to a lifetime later and the largest working force is about to turn to retirment. Sitting back, kicking up their feet on welfare and pensions.


Here's what will happen in 7-12 years, and the "best" part…. you can't do a damn thing about it, so instead of discussing wether or not this is true and why it happened (like all the scientist idiots spent so long debating wether Earth was heating or cooling for so long instead of acting), I want you to sit down, start planning your life, and if you were born between 50-70; start taking responsibility again…….. Cause most likely, the latter of you are the ones who are going to lose the most.

List of to me obvious things that will happen:

1. Massive decrease in national income based on the high amounts of people retiring.

2. That will be followed by a massive decrease in consumption by the general population. Luxury goods will suffer the most.

3. Companies will be forced to slow down on growth and maybe even cut back on their workforce to meet the demands of the society destroying concept of "stockholders".

4. When you retire, at some point you simply get too weak and too old to maintain the house or property you own. You want to sell… get out of the race. But unfortunately since you are amongst the biggest workforce ever to have existed, and since you decided to sell during the lowest birth rate in over a 100 years, it will be a buyers market.

Property values will plummet to the ground, simply because there will not be enough buyers to invest in the vast number of available houses.


5. We all know what happens when housing crashes.

Why can't you do anything about it?

Simple answer: Birth rate……… you cannot invent a bigger generation of people than there really is.
You cannot make people consume more because they wont be earning enough and will be paying too many taxes to sustain welfare of those on retirement.


So what's my point? Well… like I said. Stop spending…. get out of debt and get out now. Because in 7-12 years, I consider this a 99% chance that our economy will be completely different. In a bad way compared to now….

Best of luck to you.


I agree. I think it'll be sooner though. s&f


Yeah they said the same thing 7-12 years ago as well.

And we are still limping along.

posted on Jun, 24 2013 @ 10:22 AM
link
I give it three years max myself. I have been watching economists for years. I don't understand how come it hasn't flopped yet, must be a lot of dumb people in the world who believe that this economy is real I suppose. Economies are based on belief but even belief cannot stop something from dying when it is very very sick and covered with bandages.

posted on Jun, 24 2013 @ 10:23 AM
link
While your post seems logical to me the much rumored complete economic crash is just another item to add to the list of things that people have been proclaiming are happening soon but never do.

People will argue that each of those 7 items have already happened to varying degrees but as a whole and complete event none are even close.

I'm not saying they can't or won't happen I just think that a certain element of humanity , not saying OP, wants to live their lives as if each event is a sure fire thing.

posted on Jun, 24 2013 @ 10:56 AM
link
I have a rotating food pantry that I maintain. It is discouraging to think that I would have to maintain it for a long time. I know it is necessary because of a lot of things happening in the world, I cannot stop having it. I only have a couple months worth so I hope the collapse doesn't create a many year problem. If there is a collapse, I suspect that there will be a reduced amount of food available, so my stores only need to subsidize survival of the family.

so, eventually, but probably more than 7-12 years.

posted on Jun, 24 2013 @ 11:26 AM
link
Sure whatever. I been reading this nonsense on ATS for years. In 2008 we had 2 months untill everything exploded and the universe collapse into itself, now its 7 years? Blah. Lets talk about something more interesting like consciousness or aliens or something.

posted on Jun, 24 2013 @ 11:36 AM
link
I'm really not an expert of any kind on the economy and its future, but aren't there plenty of people around at this time to replace the baby boomers' spending and consuming once they retire?

All we see is mindless consuming all around us, from all age groups.
edit on 24-6-2013 by Dominar because: (no reason given)

Originally posted by Dominar
I'm really not an expert of any kind on the economy and its future, but aren't there plenty of people around at this time to replace the baby boomers' spending and consuming once they retire?

All we see is mindless consuming all around us, from all age groups.
edit on 24-6-2013 by Dominar because: (no reason given)

In Denmark alone as an example.... In 15 years approx 60% of the grown population will be outside the workforce.
Thats a dramatic difference compared to now.

How would any government expect to sustain welfare and growth when the majority of the population isnt contributing with any tax.

it cannot go on people are not as stupid to fall for wars now to thin out the herd .

but we have a goverment who has now started a housing bubble like america while cutting a further $19 billion .

thats why i would never have children the shtf sometime

People living longer with a declining birth rate (America is less than 2 and engineered to be in decline by the population control crazy elite)= a society unable to pay for itself.

Throw in out of control immigration into the mix as well. 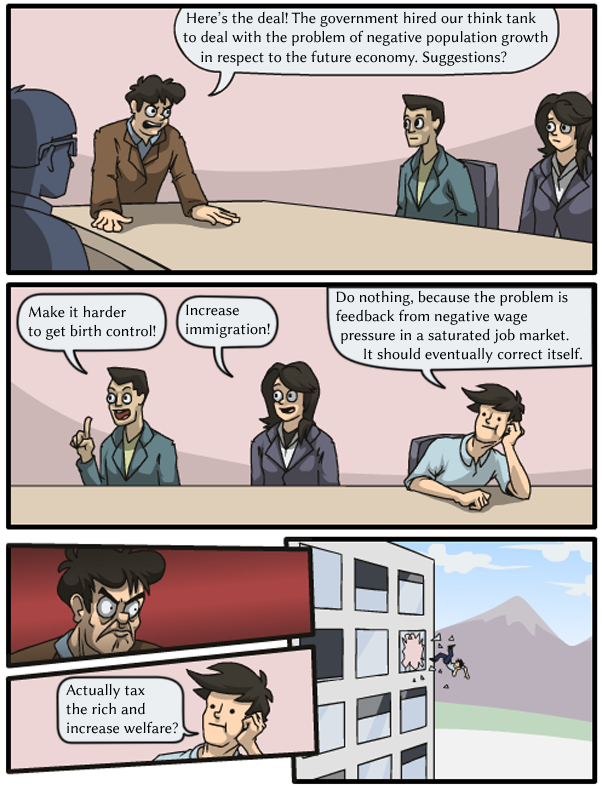 Wouldn't sweat it too much. I know I don't plan on having kids anytime soon. For starters I barely make enough to take care of myself, so why would I want to bring anyone else into the world to face the same? After a while of population decline, employers wont be able to be as choosy which will force them to bring wages back up and things should sort themselves out. Downside is that we may have to wait another generation or two. It's one of those long-term things.

Originally posted by beezzer
I'm betting on 4 years. Financially, that's how long it'll take for me to get off the grid and live comfortably.

I`m striving toward 3 years. Financially, that's how long it'll take for me to get off the grid and live comfortably.

And just showing a bit of respect for my elders, oooooh but so close.

Even If the OP`s concerns (which are valid imo) were removed from an economic collapse scenario the rising amount of debt the US has through the Fed will one day create one. Around Christmas last year each American man women and child were in debt by $53,378.00, I don`t know about anyone else but I wouldn`t want to be born into that debt. Which the countries debt is rising by 2.5 billion per day.


People can see a monster rising on the horizon and have done for many years and as they say when America sneezes the whole world catches a cold. We will all be affected.

This is only one area of concern globally amongst the myriad of problems that aren`t being addressed and left to fester while we march on developing gangrene.

Its very good advice in the OP to individually get our butts out of any debt.

True, but you can gain wealth, with fewer people to share the pie among themselves there ought to be less poverty.