Oldies but goodies and an errr really? now moment.

posted on Jun, 22 2013 @ 07:32 AM
link
I have to thank one of the most prolific and well balanced members of the this forum for jogging my memory and sending me scuttling over to YouTube for this thread. They PMed me asking me about some vintage footage and that led me to indulging in some lateral thinking searches on YouTube. Inside 10 minutes I came across this footage and in the middle of it one of those.... "Err right.... OK soooooo....how come this one's been overlooked for so long? moments.

Some of the oldies on here might be able to confirm this and it adds to the background of the film as being genuine. Isn't the narrators voice that of the Newsreader Reginald Bosenquet? That would suggest it's either from the British ITV vaults or possibly, the Pathe news vaults. The reason I mention this is that, it does give the footage genuine credence as to being from a genuine News Report from the period. Anyway, along with other footage here is a story of 50 scientists and other qualified personnel observing and filming a UFO during an eclipse of the Sun over Norway in the 1950s.

I like the old footage of this stuff a lot. I like watching it because the technology (like photoshop and HD) was not what it is today so there is less fear that footage was tampered with (IMO only). There was also more of a stigma about coming out and admitting sightings back then. Now it is considered "cool", when back then you were just a local fruitcake who owned too many cats. I would ASSume fewer people would risk their reputation for a hoax that came with such negative ramifications.

I am sure the debunkers can debunk this one way or the other. As for me...I will just enjoy watching it again and pondering upon it. Thanks again.
edit on 6/22/2013 by Kangaruex4Ewe because: (no reason given)

posted on Jun, 22 2013 @ 11:42 AM
link
Has anyone matched up case data with the film? I'm coming up dry. The film says "Over Norway" and gives only the year of 1954, stating that it was made by scientists filming an eclipse.
Also, can nayone identify the film source for the Youtube clip? It might have better data in the credits.

Originally posted by CardDown
Has anyone matched up case data with the film? I'm coming up dry. The film says "Over Norway" and gives only the year of 1954, stating that it was made by scientists filming an eclipse.
Also, can nayone identify the film source for the Youtube clip? It might have better data in the credits.

Just a quick post from me : The video in the OP is a compilation of clips from Michael Hesemann's "Ultimate UFO: The Complete Evidence" (1999)


THE FOLLOWING LIST OF PHOTOGRAPHIC EVIDENCE IS FROM:
"Ultimate UFO: The Complete Evidence" (1999)
2000 Film Productions Present
The Footage Archives
A Film by
Michael Hesemann
and
Natalia Zahradnikova

I've not looked up the relevant segment from the documentary, but I think the entire documentary it is on Youtube so it should not be hard to find the relevant bit and see if there is more information there. I think all the bits of that documentary have been uploaded by "Denny From Space" on Youtube. See the search results below:
www.youtube.com...


Also, there are various videos of Hesemann giving presentations (filmed, from memory, by Quest) which may cover this incident (I know I've seen the relevant footage somewhere before - but that could have just been in the above documentary) and, last I heard, Hesemann is still around.

The AFU probably has information at its fingertips in relation to this sighting.

The huge UFOCAT database has the following entries for a sighting on 30 June 1954 in Norway with motion pictures (which must be same sighting).

The witness name given in those UFOCAT entries (Bjornulf) should make it fairly easy to find relevant information.

NICAP's "The UFO Evidence" includes the following in relation to the Bjornulf case (on page 4 or 5:
www.nicap.org...

Foreign pilots, scientists, and engineers also have observed UFOs many times. Around sunset June
30, 1954, south of Goose Bay, Labrador, a British Overseas Airways (BOAC) airliner was paced by a large
"parent" object and about six satellite objects [See Section X, Foreign Reports]. Later that night (about 2:15
p.m. local time near Oslo, Norway), two UFOs operating in tandem were observed and filmed under
especially favorable conditions. [11.] A solar eclipse was in progress, and three planes carrying scientists
and technicians on a scientific expedition were flying through the moon's shadow. About 50 people in the
three aircraft saw two "enormous" silvery discs swoop down from some clouds 15 to 20 miles away
(estimate based on fact UFOs were in sunlight).
The objects sped along the horizon keeping an exact distance from each other, one slightly behind
and above the other, both with forward edge tilted down. The observers detected apparent rotation, as the
UFOs leveled off and disappeared into the distance after about 30 seconds. The chief cameraman of the
expedition, John Bjornulf, managed to expose about 10 seconds of movie film which showed the UFOs.
The films, released by Gaumont, a British firm, were shown on American television September 26, 1954.
Still photographs of the UFOs have also been printed. Ernest Graham, one of the witnesses, stated that 50
persons afterwards wrote reports on what they had seen. [12]

There is another brief reference at page 88 or 89 of the same NICAP publication:


26. Scandinavian eclipse film. Three aircraft carrying scientists, newsmen and other observers were
flying near Lifjell, Denmark; on an expedition to film and study a total eclipse of the sun. At 2:17 p.m. two
shiny discs were noticed flying past the planes and witnessed by about 50 people on the three planes. John
Bjornulf, chief cameraman of the expedition, managed to obtain about 10 seconds (of the approximately 30
second UFO flight) on 16 mm color film. The film was reportedly shown on American television December
26, 1954. [See Section I]


Probably more informatively, Ole Jonny Braenne (a Norwegian ufologist, I happen to know) discussed the Bjornulf case in a podcast at:
www.binnallofamerica.com...


The next case that Jonny covers is the 1954 "Bjornulf film," which allegedly shows a UFO during a solar eclipse. Johnny explains the events which surrounding the filming and how a famous Norwegian debunker proved the true origins of the "craft" on the film.

So, anyone interested in the Norwegian video in the OP may like to listen to that podcast. When/if I get time (not likely to be this weekend...) I may listen to it myself if no-one else posts more details about what is said in that podcast than the slightly vague summary above that Ole Jonny Braenne "explains... a famous Norwegian debunker proved the true origins of the 'craft' on the film"...

I don't want to "debunk", but the
September 1958
Blue Mountains
. . .Howard Menger,
4:38 minutes in the video
are obviously hoaxes.

The others are quite good and intriguing !!

Wow- you really deliver! I'll be checking digesting this information- thank you very much.

The magazine FSR (previously "Flying Saucer Review") has published a few articles on this sighting over the years, including one in 1991 (Vol 36 Number 2) which reprinted the earlier items.

I'll embed the relevant 1991 article below. 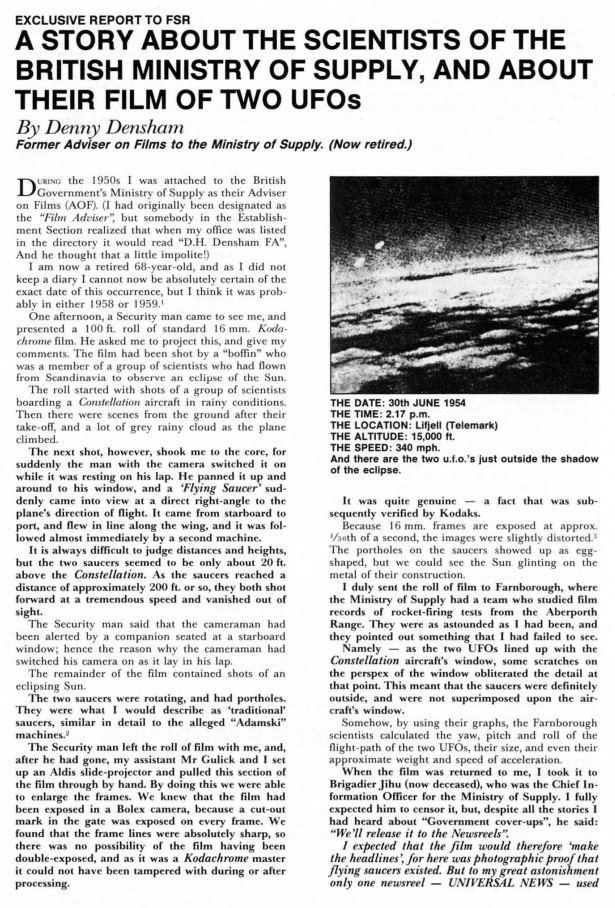 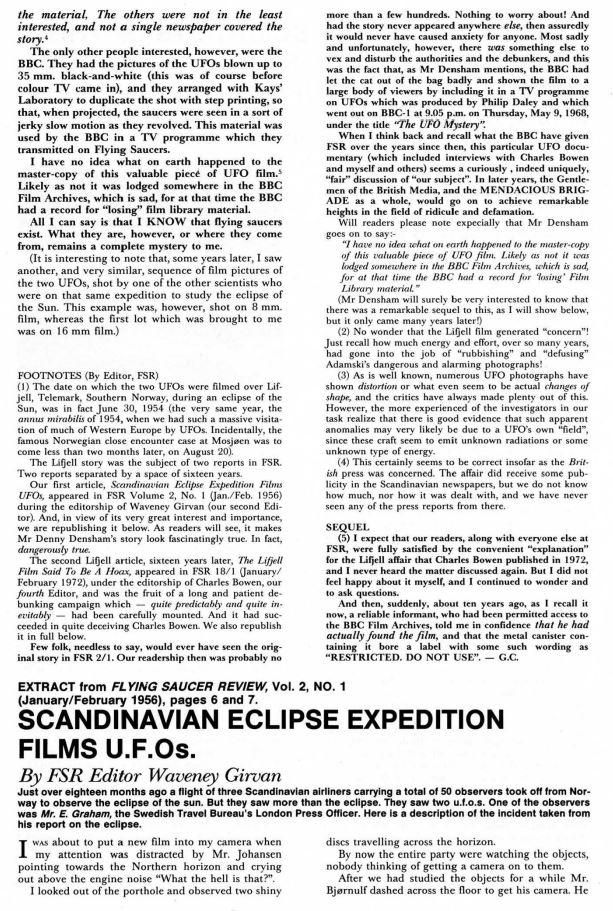 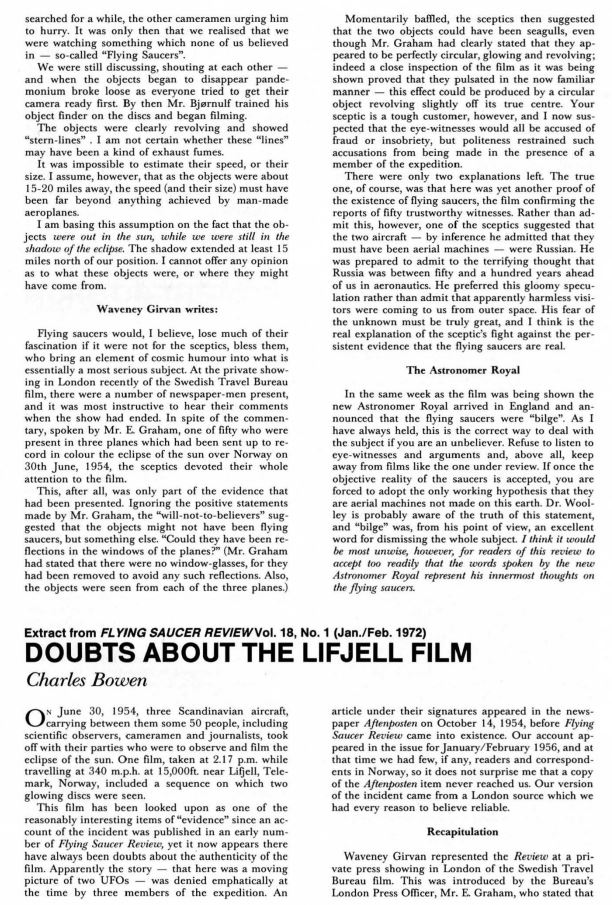 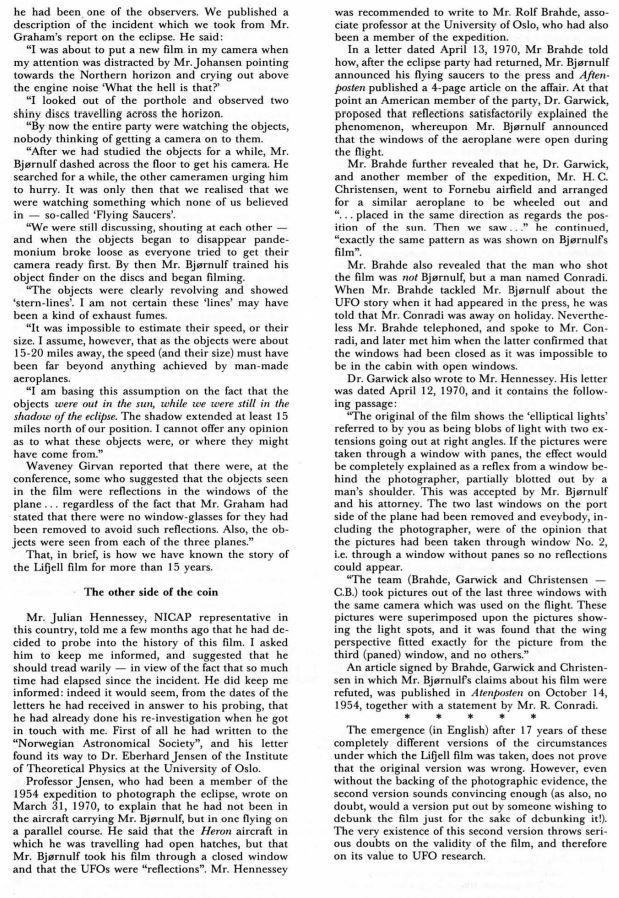 
Nice one Koi and as ever, it;s never straightforward s it? So they did see a UFO independently of the film and yet, the film itself could well be reflections in the glass of the porthole. I guess it's understandable that, in the heat of the moment. Someone shouts..What the chuff is that?"; and points. You react by flicking the camera on and looking for the first weird thing in the direction they are pointing, which happens to be the reflections in the pane. in the heightened state you're in adrenalin pumping, you shoot them thinking they must be what people are talking about.

On the other hand , one has to be a tad suspicious about the prosaic explanation given, no-one ever actually saw the test results which the claim showed it was a reflection, save the people making the claim. It is a matter of record that, the authorities were keen to stick a lid on things like this and given the number of august bodies on board the various craft claiming they saw something at the time, there is undoubtedly a good chance they were asked to keep quiet and make no further comments about what happened that day.

It is interesting that, the vast majority of those there, post the incident seem not to want to talk about it. Only those seeking to give a prosaic explanation were talking. That in itself often tells a story, ,one suggesting that, whilst people were willing to just keep quiet they were not willing to take part in a deliberate debunking.

Isaac as usual has a vast amount of data at his fingertips and shares with us all. Thanks again.

There is also the free pdf referencing this case and many others from Scandinavia here: 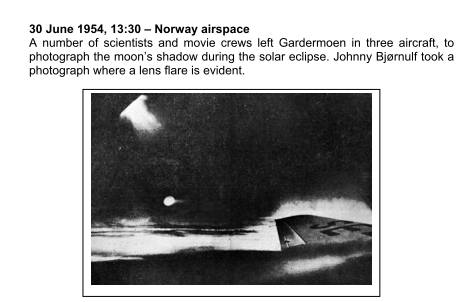 I just wish I had more time to look through all of this historical data
edit on 26/6/13 by mirageman because: edits