Large explosions rock an ammunition depot in Russia’s Samara Region, where over 13 million shells are stored. The police have started evacuation of the nearby communities.

Multiple artillery shells keep exploding at an ammunition depot near the city of Chapaevsk, a local police spokesman told RIA.


I don't believe in coincidences anymore. Not really sure I ever did and then comes this. At the worst time it could have happened.

I really can't help but wonder who did this, and why. I have suspicions though.

What do we think hive mind? Accident or something else?


I agree the timing couldn't have been any worse for this incident to happen. It apears someone is making a statement or drinking to much Vodka near a weapons depot.
edit on 18-6-2013 by KnightFire because: typo

13 million shells is a hella major arsenal. I see it as a sign of things to come myself.

History is strew, with "shots heard around the world"

I am with you in you suspicion. This is just too coincidental with the elevating differences at the moment.

Err... Accidents happen and they never heard of OSHA in Russia. lol.... I'll be interested to hear how this actually happened if anything is left to investigate where it started.


Oh come on, even in the US OSHA (OSHA being ONLY a US entity) is not responsible for storage of military hardware. And only a fool would believe they are lax with their safety precautions.

even in Russia 13 million shells is 13 MILLION shells!

Samara to Syria is a straight ish line south! This maybe be a supply depot for supplying Syria!

Putin will be pissed!

Originally posted by JakiusFogg
reply to post by Wrabbit2000


Oh come on, even in the US OSHA (OSHA being ONLY a US entity) is not responsible for storage of military hardware. And only a fool would believe they are lax with their safety precautions.

even in Russia 13 million shells is 13 MILLION shells!

The former Soviet Union has actually had many QA issues and the Soviet Union had many QA issues before that. If you read "Mig Pilot", you read how pilots would always check their fluids before flight because the groundcrew often would drain off the hydraulic and cooling fluids to drink. I'm not surprised at this and it is very reasonable to think that negligence was the most likely cause.

posted on Jun, 18 2013 @ 01:18 PM
link
Putin's comments on this will be very interesting. If it was anything other than an accident, you can bet your life that he will let us know in a most displeased way. We might actually get some emotions and/or facial expressions out of him!


In point of fact, this is almost impossible to see happen in the United States. I wish I could find a bigger picture, Having been through this little town between Vegas and Reno, even this view doesn't do the place justice for one of America's larger ammo dumps inside our borders.

This second one is what they look like when seen closer...and they line the hills in 3 directions from the base, as far as the eye can see from Highway 95.

They are designed that way to shield them from outside forces like weather...as part of it. However, the more pressing concern for design is to almost remove the possibility of one exploding to reach an adjoining one and set off a chain reaction. I'm sure it's not completely impossible....and Seal Beach NAS used to store Nuclear Weapons there. No distance would have mattered. Conventional though? If Russia was or is using something similar? 13 million or 13 billion shouldn't matter. It ought to just be one bunker going up.


Follows, but are the answerable, errr no.

As for the rest, sorry I consider that to be nothing more than foolhardy underestimation at its finest, But then that always was the US's major problem.

Don't forget it is now a long period of time since the fall of the Soviet Union, they have had a long time to "adapt". Simply to write this off as negligence, is a little too easy IMO


Thats not the article title... the title is:

Your title is nothing close to the actual situation. If the entire depot was destroyed and 13M shells detonated all at once as is implied by the title, it would have been on par with a small atomic bomb.

ATS sensationalism (lying) at its best.


OK fair enough, but show me a picture of the Russian store that just blew up.

Ahhh You're thinking it's a big warehouse aren't ya???

Timing is curious to be sure

Maybe my sigh of relief yesterday regarding events in Syria was premature.

Perhaps, it is on and crackin'.


To be honest I actually think the OP title downplays the situation, considerably.

To add the actual RT title is sensational enough.

The casualties are in my thoughts and prayers...

posted on Jun, 18 2013 @ 01:39 PM
link
They have a problem on their hands. This wasn't a small place. Nothing like the one above in Nevada, but then, almost nothing I know of in the world is. It's enough though. 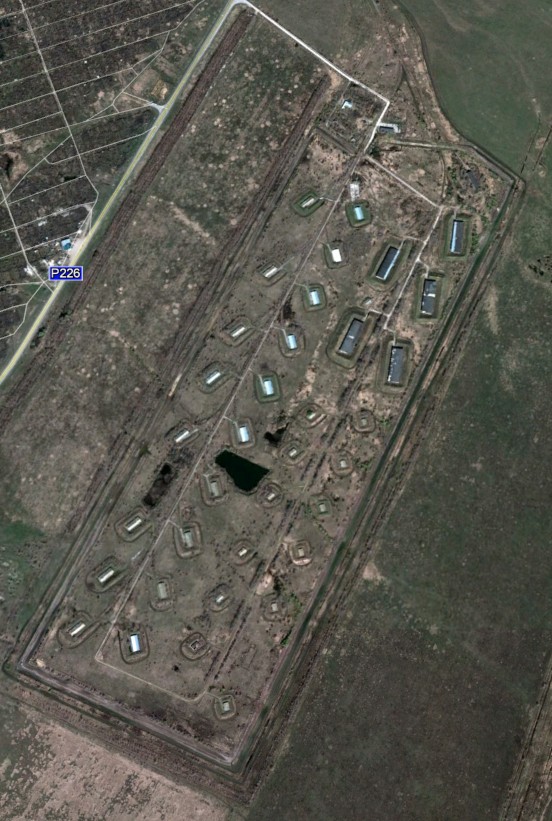 That sits 2.6 miles from downtown Chapaevsk and appears to be the only thing in the area to meet the bill. Another one just north looks like it could have been a plant of some kind, but no storage to go with it. It's on a rail spur.

What damn near stopped my heart before I checked and confirmed dates though comes on page 5 and 6 of this document.

Introduction to Chemical Armament in the War Against People

You can also just do a search of the town name and it comes right up in the document. They destroyed the last chemical weapons warheads at that facility in 2001.....or they'd have a 5 alarm panic instead of just a major problem, IMO.
edit on 18-6-2013 by Wrabbit2000 because: Sorry guys.... I put the wrong document link in. Fixed now.

posted on Jun, 18 2013 @ 01:39 PM
link
This video is awesome. It shows the blast, yet the kids playing soccer are unaffected by the blast and keep on playing. Priceless