posted on Jun, 17 2013 @ 11:21 AM
link
Interesting video showing currents of galaxies in the universe, including visible and dark matter.

The narration is a French person speaking English, some words require a keen ear to decipher, nevertheless worthwhile research and a very informative video. 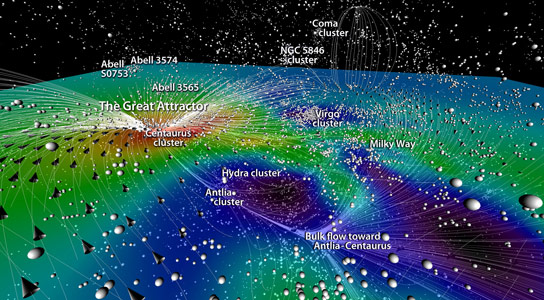 This map shows the currents of galaxies in the universe. The galaxies (white spheres) are like dead branches in a sea. Currents carry them from an island (galaxy cluster) to the closest larger island of galaxies, the Great Attractor region. Red and yellow colors show the islands, and dark blue shows the voids that galaxies avoid by following the currents.

A new seventeen minute video shows the motions of structures of the nearby universe in greater detail than ever before, revealing a dynamic three-dimensional representation of the universe through the use of rotation, panning and zooming.

The large-scale structure of the universe is a complex web of clusters, filaments, and voids. Large voids—relatively empty spaces—are bounded by filaments that form superclusters of galaxies, the largest structures in the universe. Our Milky Way galaxy lies in a supercluster of 100,000 galaxies.

Just as the movement of tectonic plates reveals the properties of Earth’s interior, the movements of the galaxies reveal information about the main constituents of the Universe: dark energy and dark matter. Dark matter is unseen matter whose presence can be deduced only by its effect on the motions of galaxies and stars because it does not give off or reflect light. Dark energy is the mysterious force that is causing the expansion of the universe to accelerate.

The video captures with precision not only the distribution of visible matter concentrated in galaxies, but also the invisible components, the voids and the dark matter. Dark matter constitutes 80 percent of the total matter of our universe and is the main cause of the motions of galaxies with respect to each other. This precision 3-D cartography of all matter (luminous and dark) is a substantial advance.

The correspondence between wells of dark matter and the positions of galaxies (luminous matter) is clearly established, providing a confirmation of the standard cosmological model. Through zooms and displacements of the viewing position, this video follows structures in three dimensions and helps the viewer grasp relations between features on different scales, while retaining a sense of orientation.

It is a very cool video! I think the french accent adds to it she has a very relaxing voice.

Here is the link to the thread

Originally posted by abeverage
I will be curious to see if it points to a pattern created by the Golden Ratio...


The Golden Ratio, now that would be something.

I bet there are a whole load of interesting finds from this research. There has to be an equation or formula that accurately explains this motion and expansion in the bigger picture. If all galaxies are moving towards their largest super cluster islands, does that mean the super cluster islands are moving towards each other, in the bigger picture. If the clusters are forming into more dense islands how does this fuel the expansion rather than contraction. Are the increasingly dense cluster islands forcing expansion?. Is there something forcing this motion, ie a black hole or dark energy gaining compulsion from another part of the universe? So many questions, hopefully more answers soon.

There has to be a direct correlation in nature that might give clues as to the bigger picture motion of the universe.

All these clusters being pulled together and voids being created, perhaps dark energy utilises a frequency that acts as something like a resonance experiment, creating patterns of clusters or as a catalyst for the motion of dark matter.
edit on 17-6-2013 by theabsolutetruth because: (no reason given)


I did a search, which didn't show anything, not keen on the new 'search' facility.

I will let the mods decide if they want to close it or keep it.

I think the article adds to it and is part of the thread, it explains the science behind it.

I can't believe your thread only got a few posts, sometimes I wonder, this is such an important piece of research and people are on ATS talking nonsense about Obama and crappy UFO hoaxes more than this.

If I was a MOD and could make things seen I would have great research a major topic that always gets prominence.


Yeah no probs. I agree about the search engine, it is very temperamental! I say just leave them both up, your heading is more catchy

posted on Jun, 17 2013 @ 05:17 PM
link
These 'voids' are known to host 'feeding' black holes. It would be interesting to see the interactions of those in conjunction with the flow maps.


The cosmic voids are regions containing few galaxies and span hundreds of millions of light-years across, filling up half the universe. Only 5 percent of all galaxies reside in these bubble-like regions, with 95 percent of galaxies packed together in clusters, akin to celestial cities.

Anca Constantin of Drexel University in Philadelphia and her colleagues studied more than 1,000 void galaxies within a 700-million light-year slice of the universe using the Sloan Digital Survey (SDSS-II), finding that supermassive black holes are just as common in void galaxies as they are in so-called walls, which are tightly packed groups of galaxies that form a sort of wall structure.

?Interestingly, we see actively accreting black holes in all phases of evolution in these sparse regions,? said Constantin, who presented the research here this week at a meeting of the American Astronomical Society.

Black holes are thought to begin their lives as voracious feeders, sucking in, or accreting, nearby material and continuing to bulk up. ?They grow and grow and at some point they either get lazy or they just run out of fuel,? Constantin told SPACE.com.

Finding black holes all along this growth continuum ?means that the black hole growth process is quite similar in what could be compared to the most reclusive country sides and in the crowded urban regions of the universe,? Constantin said.

However, Constantin and her team did find some subtle differences between black holes within the "rural" and "city" galaxies. They found more black holes at earlier stages in their evolutionary process within void galaxies, meaning the black holes were still in the active-feeding stages of their life cycle.

Yes, this is a 'local' map, the article does say this clearly. The thread title does say ''nearby Universe'' so that should give good indication of the area covered in the research.
edit on 17-6-2013 by theabsolutetruth because: (no reason given)


The title always said 'nearby Universe' as this is the title from the article.

I have quoted this clearly also in the OP text.


I know. I know you did. No worries.
I just thought it would bear repeating.


yup...that's just the neighborhood with the milky way represented by a single dot

is there a reason you guys didn't to an embed? you know how ATSers just love embedded pix & vids


Yep, would be super interesting to see the flows in the ENTIRE universe, inc expansion, black holes etc, that would be the most awesome thing.

Thanks for the embed. My YT account uploaded then said it was contrary to T&C's.