White House tweets Pic of Obama playing with toy gun on Father's day. EDIT TO ADD: These pics are f

What does the President do on Father's Day?

Not only does he play with toy guns, but he lets his kids play with them too!

I thought guns were bad, Mr President. I guess the standards that he wants the 'little people' to live by don't apply to him or his family though.

Oh, a link would help:

These pics were taken over a year ago.

Excerpted from The Daily Caller: Wishing Americans a happy Father’s Day, the White House tweeted a picture of President Obama and one of his daughters playing with toy water pistols.

The Tweet comes at a time when several schools around the country—fearful that such toys make kids more prone to violent behavior—have launched trade-in programs that encourage children to exchange their harmless toy guns for chances to win prizes, like books and bicycles.

“Playing with toys guns, saying ‘I’m going to shoot you,’ desensitizes them, so as they get older, it’s easier for them to use a real gun,” Hill said in a statement to Mercury News.

Earlier this year, a California activist named Jerry Rubin ramped up his efforts to dissuade parents from buying toy guns for their children.

Children who bring toy guns to school have met with severe punishments as of late. A Maryland kindergartner who took his cap gun on the bus was interrogated by administrators until he peed his pants, and then suspended for 10 days. Cap guns have bright, colorful tips to distinguish them from real guns, and make a popping noise when fired.


I dunno but that doesn't look like the white house to me. And the "super controversial gun" is a water gun. 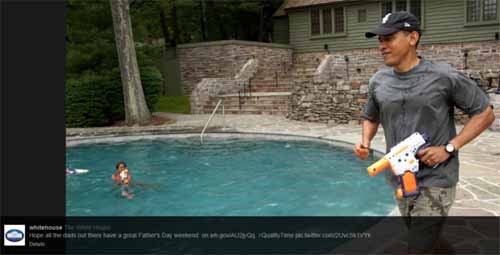 Not only does he play with toy guns, but he lets his kids play with them too!


Well what you'd expect? Toy water guns are meant for kids in the first place, you know. They are supposed to play with them. Otherwise you miss the whole point of a "toy water gun".


What a (*&#^@ pathetic excuse for a topic.
Really... the presidents playing with a water pistol while his child is in the pool?

are you all that immature that you think this is worthy of a dig at the president?

seriously..grow up.. the real issues out there are being ignored while you act like children bickering over who sits on the cool bench at lunch time.

This president is bad, not as bad as bush, but bad.. so why don't you try a little harder next time.

I wish this crap wasn't so prevalent on ATS.. anyone who comes here and see's something like this as 'breaking news' isn't going to come back!
edit on 17-6-2013 by Agit8dChop because: (no reason given)


I agree, also doesn't look like a school either. Just saying.

I guess it is a point that is lost on the President's team, seems as though two of them are here.

You would like the president to micro-manage schools now?

posted on Jun, 17 2013 @ 07:49 AM
link
There was an episode locally to me a few years back of a kid's birthday party. Neighborhood and school chums all came. There was a hotdog cookout, one of those inflatable jumping things you can rent for such events. It was all overseen by the parents and older sibs of the kid having the birthday.

Anyway, some of the playthings available were toy guns. It didn't mention if they shot nerf balls or squirted water. Well, one of the parents of the kids attending were ticked that their child/children were allowed to even see these things and threatened to sue the host family.

No idea whether any lawsuit was ever filed. It all disappeared from the media after about a week or so. But the reaction by the parents of that one kid started a community skirmish that made the comment sections as well as the letters section of the local news rag. There were no politics involved, just a question of whether the host family had the right to allow toy guns to be accessed by the visiting kids.

We really have become a thin-skinned society. Parenting, in some cases today, doesn't even exist and in others, looks to be based on the policies of the Spanish Inquisition.

In this case with Obama, I guess maybe it does come down to politics; if you're gonna preach an anti-gun sermon to the nation and then play with water guns pool side, it's gonna stir the pot. It's worth talking about but I wouldn't get my Fruit of the Looms messy over it.


Yeah, right. I agree but still: The President is clearly playing, him and his kids, with toy WATER guns, which are quite unrelated to toy cap guns. Cap guns are Kinetic Energy. Water gun are a spray of water. I understand in your post that one day the toy cap gun was indistinguishable from a toy water gun, but here I seriously doubt President Obama is holding a cap gun. I mean it's insulting. Can't the guy have even just a bit of water-related fun with his kids without being accused of some gun campaign agenda?