are genuine cropcircles an attempt at non-aggressive warnings against herbicides, pesticides, & terminator seeds?

Herbicides and pesticides may be making us sicker than we know.

Could these also be affecting our minds?

I would also like to mention one activity that exposes us to herbicides & other chemicals: mowing the lawn.

They get in your eyes, stick to the skin, get ingested, and get inhaled.

Most people soak their lawns with weed killers and fertilizers more than farmers do their crops.

Terminator seeds are just the ultimate expression of greed.

I also have to ask if cattle mutilation is connected to this?

Is it a warning about mad cow disease?

Are these warnings against a toxic food supply?

Maybe the beings responsible for these phenomena are trying to get their message across in as non-threatening as possible way?

Is it like hovering above nuclear installations and disabling them?

so whe know what you claim we should be looking at


cropcircles are a late 20th century phenomenon
edit on 17-6-2013 by reject because: (no reason given)


cropcircles are a late 20th century phenomenon
edit on 17-6-2013 by reject because: (no reason given)


Not really. In the past they used to be called "fairy circles" or "fairy rings". Of course they were nothing near the pieces of art that we find today, but as our civilization became more complex, the designs followed the same pattern.


fairy rings are not really cropcircles though...they're kind of a fungus growth among grasslands and meadows; sometimes they are only defined by larger growth at their edges


Incorrect. They have been happening in that area of England since who knows when. A long time. I have found more than one account dating back 100 years or more.

I would source it but I don't want anyone stealing my thread I am working on.


fairy rings don't even resemble cropcircles except that theyre round too

some of them even have mushrooms sprouting out of them

Basically, the title says it all are genuine cropcircles an attempt at non-aggressive warnings against herbicides, pesticides, & terminator seeds?


Who is giving this warning? "beings", what kind? Human, extra terrestrial.


Maybe the beings responsible for these phenomena are trying to get their message across in as non-threatening as possible way? Is it like hovering above nuclear installations and disabling them?

How is shutting down a nuclear plant not threatening?

When military forces go into another country for war first steps are to destroy the ability to communicate and generate power.

Power is required in modern times to run hospitals, run machinery required for the sick.


Shut down a plant and the near by city using its power generated goes into crisis mode, for many not very threatening but for some could be life threatening, intelligent aliens would be able to think that far ahead I would suspect.


Think about it if they went about doing these some other ways like incinerating crops in fields or blowing up nuke sites.

Well that would be the way the go, meaning we would have confirmation of Aliens unless another massive cover up to hide who is destroying nuclear power plants gets put in place.


I know what a fairy ring is, thank you.


I have never heard of a UFO shutting down a nuclear plant. What they HAVE done is shut down individual warheads and/or take them "off line" while in their silos. They don't like nuclear weapons and I don't blame them.


I have never heard of a UFO shutting down a nuclear plant. What they HAVE done is shut down individual warheads and/or take them "off line" while in their silos. They don't like nuclear weapons and I don't blame them.


Either have I, actually maybe a story about Chernobyl being UFO related.

I read Nuclear installations by the OP and went into thinking they were talking about power plants to see my error now when re reading. from memory there have been a number of incidents where silos and the missiles in them were disabled.
However, I cant recall if there is any actual verifiable documentation that these incidents really occurred as they are portrayed through UFO web sites and if so if any documentation is available on the investigations done by the military or atomic commission or FBI etc.


Don't really have any time to do research right now, but yeah, those things happened. They make up some of the strongest cases available.


I know the incidents and without delving into it right now I believe there are FOIA documents to show that war heads were shut down.

Without seeing official investigations and researching procedures on sites that hold these weapons there are a few more earthly explanations that need disqualifying before aliens can be brought to the table.


Interesting none the less


are you talking about the, mowing devil found in 1678.

The Mowing-Devil: or, Strange News out of Hartford-shire is the title of an English woodcut pamphlet published in 1678.


The pamphlet tells of a farmer who, refusing to pay the price demanded by a labourer to mow his field, swore that he would rather that the Devil mowed it instead. According to the pamphlet, that night his field appeared to be in flame. The next morning, the field was found to be perfectly mowed - unnaturally perfect, in fact. This pamphlet, and the accompanying illustration, is often cited by crop circle researchers as among the first recorded cases of crop circles.[1] 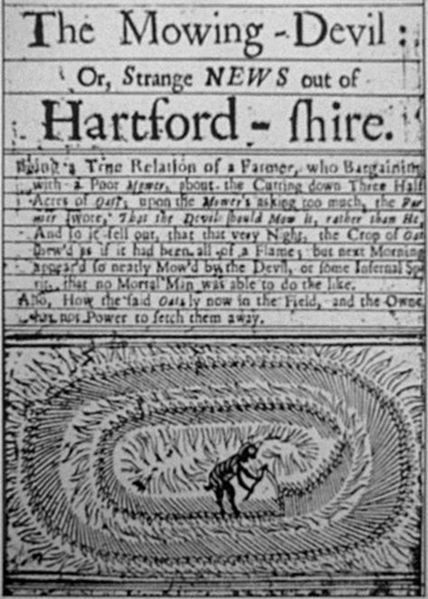 
there are also other circles found beside crop circles, there are tree, meadow, sand, snow and ice circles.


Well yeah, that is one of them. Definitely the most well known.


The modern Crop circles we know today are made by people not Aliens so they are related to nothing other than art , no doubt the 2013 batch will be arriving soon , after last years washout there may be a couple of spectaculars from our frustrated crop artists .

The original phenomena were just circles in crops hence their name , they have no relation to what we see today .
1945 crop circles


Would you be so kind as to explain the correlation between crop circles and cattle mutilation? Happening on opposite sides of the planet....

You seem to be talking pesticides - cattle mutilation does not occur from chemicals.


Well, honestly they were the precursor to what we see today. I am unsure of what causes them, but the genuine ones appear (repeat APPEAR) to be weather related. So they are related, as the phenomena appear exclusive to the same locale in England.


mad cow disease may have been triggered by cattle feed and water contaminated by fertilizers, herbicides, and pesticides; speculation on my part, I admit.