Mars & Earth: A Comparison of Surface Maps And Some Questions

It's the original maps from the Viking mission provided by NASA and implemented into Google Mars as an overlay option. You can actually launch Google Mars, activate the overlay and see for yourself.

I don't know whether the black areas used to be elevations at some point in time, but they do look as if they were exposed to something whereas the lighter areas were not. But that's my amateurish interpretation, I have really no idea and just noticed this strange similarity ...

posted on Jun, 17 2013 @ 02:39 PM
link
OP, I think your post has the possibility of being close to the truth. I am not saying it is because there is far more than what we see out there but it seems possible for my knowledge. Venus and Mars would make sense most of all. Losing our Ozone would probably dry our planet out which cause it to shrink in size. Also the map seems decently identical.


Interesting to say the least, I've always thought about Mars being in the (understood) habitable zone before Earth was. I never really though about how the planet was made up before and it's an interesting concept in how it would compare to the Earth.

All planets have an equator with a north and south pole, so under similar conditions I don't see why land wouldn't form the same. I'm no expert but it's certainly an interesting thought.

I think it's a coincidence, but it is uncanny.

Here's my latest Gigapan for you, OP, in return.

If you get what I'm saying.

People will see anything they want. If they see a rabbit, does it mean rabbits once inhabited Mars?

posted on Jun, 17 2013 @ 03:21 PM
link
Earth and Mars are not the same size and I don't think those dark spots are continents. Your also rotating the planet around to line up the blots with the Earth image. Just look at high rez pictures of Mars available online and compare them to your picture. I think your just letting your brain make the shapes for you out of blurry pictures. That's what our brains do. I have been watching Brain Games on TV lately and its pretty informative.


I don't mean to go off topic, but have you zoomed right into the base of the large rock on the right of your pan? At least one particularly interesting hair band shaped thing in the shadows. Certainly does not look like a rock to me......

The region that barely resembles South America is immediately to the east of "Africa" and is rotated 90º. It is composed of Terra Sabaea and Terra Meridiani.

As can be seen however, the albedo features don't have much relationship to the actual topography.


Thanks for shedding some light on this, Phage!

The image referenced above is the one used for the overlay in Google Mars. It should represent the visible spectrum of light reflected by the martian topography. But I understood that the laser-altimeter data from the MOLA instrument (MGS) shows that current elevation data does not relate to coloring or shading, which makes sense.

Frankly, I was intrigued by the similarity of the shaded areas (rotated ot not) and was starting to think about continental drift, rising ocean levels, millions of years of planetary evolution and, ultimately, some cataclysmic event leading to what can be seen in the OP, in a different dimension of space & time.

But as I mentioned in the beginning: I'll be happy to dismiss such thoughts due to the lack of any further evidence. Thanks again for your input!

Originally posted by fiftyfifty
Good find! It begs the question, were we once on Mars before we terra-formed Earth as a replica when we knew life on Mars was eventually going to become impossible? Is Venus next? How about a whole new theory that Venus is purposely being shrouded by what appears to be a thick atmosphere while it undergoes terraformation?

EDIT: OR what if Venus and Mars were previously inhabited and they had to move to Earth as their planets became more uninhabitable. Would explain a lot of the ancient civilisations, cultural and religious differences. Bloody foreigners!
edit on 17-6-2013 by fiftyfifty because: (no reason given)


If you look at Google Maps, and look above the UK, there's a depression in the ocean that looks like a mold for the UK. There are legends that great wizards created the UK by scooping out land from the ocean and placing it beside Europe. Geologists say that the UK was raised upwards in the South caused by ice sheets pushing down on the Northern side.

On your gigapan, far right, under the shadow of the large rock formation, something that was once circular now lays part buried and broken, but nevertheless obviously circular......

great theory to think about

are there any virtual models of mars? google mars etc

planet size can differ due to a molten core

angular inclinations can happen due to precession and interference

as for space time...factor out the observer

posted on Jun, 17 2013 @ 06:34 PM
link
Wow, so NASA has been being lazy and sending their rovers and satellites forward in time instead of heading out to Mars? Just kidding. This thread was a totally new concept.

i think this image will help you with your comparisons

they are from NASA - project blue marble

heres the website with more images of earths terrain

posted on Jun, 17 2013 @ 08:51 PM
link
i read a book by richard hoagland that stated the north and south crusts of mars had swapped places the highlands being in the south but good find s & f


Do you mean this? 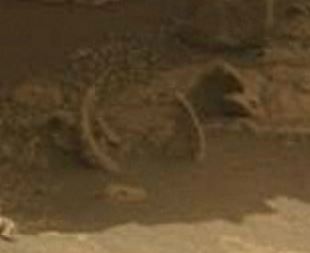 Thanks impaired for another super cool gigapan!
gigapan.com...