Dolphins are Mysteriously Dying Around the World

Dolphins are mysteriously dying around the world in Cape Cod, The Gulf of Mexico & Brazill. Since January, dead dolphins have washed ashore in Peru, the death toll reaching a staggering 877. Scientists are still trying to explain the bizarre deaths, and their best prediction at the moment is that its due to a virus outbreak or acoustic trauma.

Several mass deaths of dolphins have occurred over the past few years and while experts are worried about the die-off they say we are not witnessing a global population crash.

Our friends the Dolphins are in trouble and no one knows the reasons why. It is speculated that the die off may be caused by acoustic trauma. Although at the moment nobody really knows why. I have heard reports that some Navies use a rader system that can damage Dolphins. India has just past laws calling Dolphins non human persons. It is in my eyes a step in the right direction. 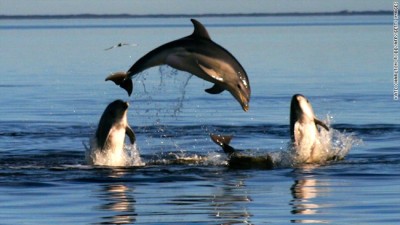 posted on Jun, 16 2013 @ 04:10 PM
link
This is a very sad,very worrying matter.Bravo for India,though I doubt this will help dolphins much in general.I really hate to hear of these dolphin die-offs,and other marine life die-offs also-it does not bode well for the future.

reminds me of "So long and thanks for all the fish...."

Dolphins are mysteriously dying around the world in Cape Cod, The Gulf of Mexico & Brazill.

Isn't that just 3 specific areas, all of which are located along the Western side of the Atlantic?

i recently found out that people from unknown corporations are taking the dolphins and makeing them reproduce in huge tanks.


Not so unknown if you ask me.

They can't hear anything with large ships around, and we are still not getting our Oceans Clean.
And we fish on thei foof as well.

One member of the Cetacean family isn't been seen since 96 ...
A river dolphin from Mekong river. It is terrible if we lose such intelligent life.


Have you got anymore information on that please...

posted on Jun, 16 2013 @ 06:39 PM
link
It's very sad and I'm afraid it's not just Dolphins that are washing up on beaches. All kinds of Aquatic animals including dolphins and whales are washing up on beaches all across the world. My theory is that The National Oceanic and Atmospheric Administration along with the United States Navy are using testing sonar 'weapons' in the depths of our oceans and this is directly, or indirectly effecting the Aquatic life. It's very sad, indeed. Poor animals.


Something big is heading our way. Not just US a worldwide event. Bee's dolphins... and Methan is probably the biggest reason.

posted on Jun, 16 2013 @ 10:29 PM
link
We are in the very midst of the BIGGEST DIE OFF the world has seen....
The dolphins are going but we ll be next....
Theres no reason mother nature couldnt smother the human race overnight.....
why be so cocky?we arent the top of the chain yet.

posted on Jun, 16 2013 @ 11:20 PM
link
Since Bill Clinton gave China our secrets on submarines (prop design), we had to start using higher power sonar to find the Chinese subs.

They used those Magnetic Resonance MegaPulse Emitters and "Teleported" information for the first time a few years ago. They now can use those high power devices and "place or remove" data on computers. TELEPORTING the data there. My Magnetic Resonance of the computers storage devices to alter what's magnetically stored on the harddrives.

We're killing lots of sea life....even negatively effecting the health of people. There should be an aircraft flying now with a Magnetic Resonance dish able to turn entire regions of humans into zombies. Effects the protons in their bodies in a very bad way....

Originally posted by purplemer
It is speculated that the die off may be caused by acoustic trauma.

Although at the moment nobody really knows why. I have heard reports that some Navies use a rader system that can damage Dolphins.

This makes no sense at all.

Radar uses radio waves, not sound waves. So how the hell can it cause acoustic trauma?


Could it be due to Man?
With all the pollution and chemicals we pour into the oceans it's a wonder anything is still alive!


Originally posted by purplemer
It is speculated that the die off may be caused by acoustic trauma.

Although at the moment nobody really knows why. I have heard reports that some Navies use a rader system that can damage Dolphins.

This makes no sense at all.

Radar uses radio waves, not sound waves. So how the hell can it cause acoustic trauma?

You are correct radar uses radio waves but sonar uses acoustics or sound waves!
Though we have been using this technology for over 70 years so what has changed?


India has just past laws calling Dolphins non human persons. It is in my eyes a step in the right direction.


It is. It was actually about time that at least someone showed a bit of respect for these rather intelligent animals. Now, if only these animals could have dolphin investigators, or dolphin doctors, the mystery might be solved more quickly...


It can be from numerous pollutions caused entering the sea (forgotten FUKUSHIMA sea Leak bpGULF leak- sea floor INHABITANT(s) or high sonar ping actual SONIC emitting (somethings) used to disrupt sea floor somethings... not sure gets murky in the astral down there, still seems noisy? times and then retreats.

OUTTA BOX @ At times considers something is scaring dolphins and other sea life native not sure OCEANS big things fall in them CLOSE...

Ever since first heard of NAVY test Sonics wondered what is down there requiring such technological response.

Hopefully the dolphins and other sea life can adapt to whatever is disrupting their LIFE in the sea.

posted on Jun, 17 2013 @ 08:16 AM
link
Dolphins as non-human persons....That is a good start. I don't think it is a virus, I think it is a combination of all the chemicals we are dumping out into the oceans, including the medicines we pee out. S&F for your concern, Dolphins are my favorite see creature and they have been a good friend to mankind throughout time.


This is a little equivocation on what was being claimed. No, you don't push a button labelled 'ping' and then all of a sudden, dolphin heads start exploding all over the planet. That is not what is being claimed by the proponents, and even though I disagree, to be fair they bring up some good points. The National Resources Defense Council, arguably biased of course, issued their report on the deleterious effects of marine noise on Cetacea and other marine life here:

Now, the Navy does not just simply run around pinging its sonar like they were in some WWII version of Up Periscope. Sonar is a gigantic beacon which says to everything within 500 nm "Here I am, you know exactly where I am now!!!!!!" It is something a platform uses only really, in an emergency, so to speak. Sonar is used to actively prosecute a submarine and is in no way employed enough to substantiate all the marine life deaths worldwide. Most 'sonar' is passive - (ie. does not make an artificially added sound 'ping' in order to do its location ranging and direction, it simply listens). Even sonobouys are mostly passive. They are much more effective that way. Even the high frequency topo mapping phased arrays employed by submarines is of limited range and is very low intensity, and is used sparingly.

Navy exercises can get noisy, yes, because they simulate combat conditions. But 99.95% of the time - both ships and subs 'run silent" Making noise is not an effective warfighting strategy on or in the ocean.

The simple fact is that this effect is being generated by conditions other than Navies. Dolphins will travel 100-200 miles to avoid whatever it is:

Coupled with this are the simultaneous group die-offs of crustaceans and birds en masse. Warm ocean temperatures and chasing food further are being blamed for those deaths, but fail to explain why other creatures such as dolphins, whales, amphibiae and osteichthyes, who would not be affected by this, are also dying in groups.

There is one thing however which affects them all, and that is infrasound. Infrasound causes distress in at least mammals (Science (NBC News: "British scientists have shown in a controlled experiment that the extreme bass sound known as infrasound produces a range of bizarre effects in people including anxiety, extreme sorrow and chills;" National Physical Laboratory, Sept 2003). Infrasound can be detected by a large percentage of larger life forms, on both land and sea.

Still a great way to go with this, but most of the knee jerk assessments have not panned out in large scale marine deaths.