The little bears of Brauron

posted on Jun, 16 2013 @ 12:25 PM
link
The smiling faces of the little she-bears of ancient Brauron in Greece indicate contentment and wisdom, dressed in their honey coloured robes and under the protection of the sanctury of Artemis they learnt the way of the bear, engaged in sacred dances and processions to the Acropolis of Athens, and crafted offerings to Artemis

I'll present the information and imagery from Bauron here, then consider what the way of the bear entailed. 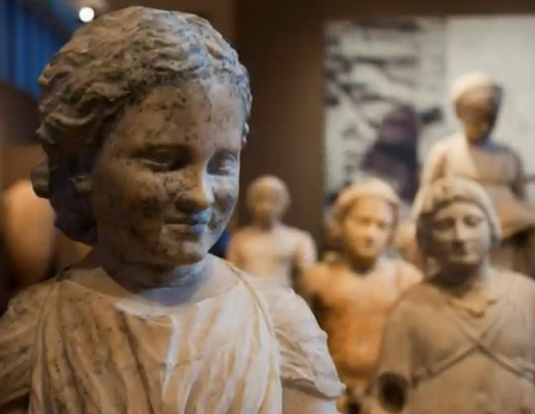 Brauron, in the ancient times called Vrauron, situated on the east coast of Attica, was one of the oldest sacred-places in Greece, where the goddess of nature and the protector of fertility and childbirth, Artemis was worshipped.


The present form of this sacred place exists from the 5th century BCE, when it was rebuilt above the earlier structures. The temple of the goddess Artemis, the shrine of Iphigenia located amongst the rocks, the Sacred House which was the residence of the priestess and a monumental propylon with the so called "Stoa of the Bears" were constructed at this period. According to some opinions part of this stoa (in the NW) was the residence for some children (5 - 10 years old girls), who served in the sanctuary.

These small girls were called arktoi ("the bears"), commemorating the mythical story about the sacred female-bear of Artemis, killed by the brother of one of these girls, serving in the sanctuary. Due to this reason arktoi were also wearing the clothes of crocus color, to remember an appearance of this sacred animal. Finally, during the festivities in honor of the goddess Artemis, the young girls were performing the sacred dances disguised as bears.

A lot of museum presentation videos are quite lame, this one is really good and well worth watching.

Many statuettes of children representing "the bears," were discovered in this place and they can be seen in the museums (Museum Brauron, British Museum London). The sculptors were also depicting the children taking a part in the cult of the goddess Artemis and the vase-painters were picturing arktoi, learning music, teaching dancing and rhythm courses. 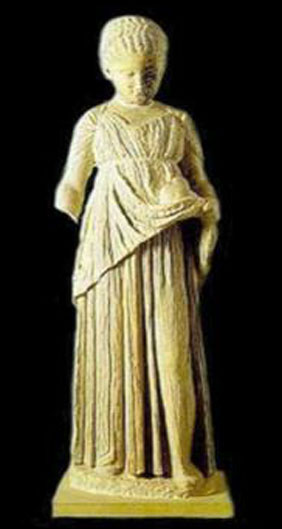 The cult of Artemis Brauronia connected the coastal (rural) sanctuary at Brauron with another (urban) sanctuary on the acropolis in Athens, the Brauroneion, from which there was a procession every four years during the Arkteia festival

Votive dedications at the sanctuary include a number of statues of young children of both sexes, as well as many items pertaining to feminine life, such as jewelry boxes and mirrors. Large numbers of miniature kraters (krateriskoi) have been recovered from the site, many depicting young girls — either nude or clothed — racing or dancing


The Temple complex itself wasn't on a huge or magnificent scale, but everything there was quite well preserved due to it being abandoned at some point, and it's a charming overall site. 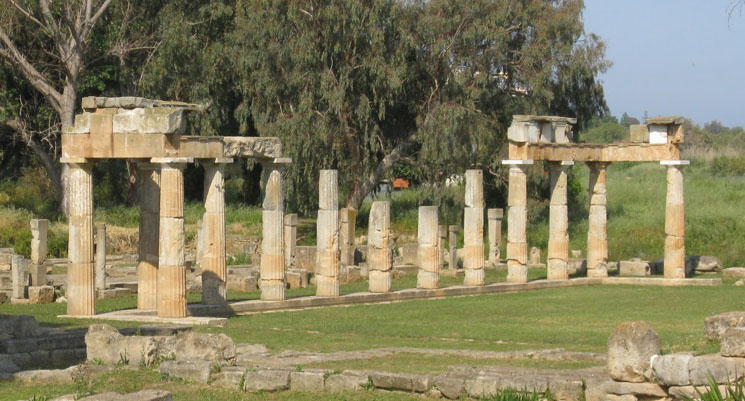 The cult of Artemis Brauronia connected the coastal (rural) sanctuary at Brauron with another (urban) sanctuary on the acropolis in Athens, the Brauroneion, from which there was a procession every four years during the Arkteia festival.

Cult activity is known from the 8th century BCE forward from dedications in the sacred spring, and a temple was built in the 6th century BCE 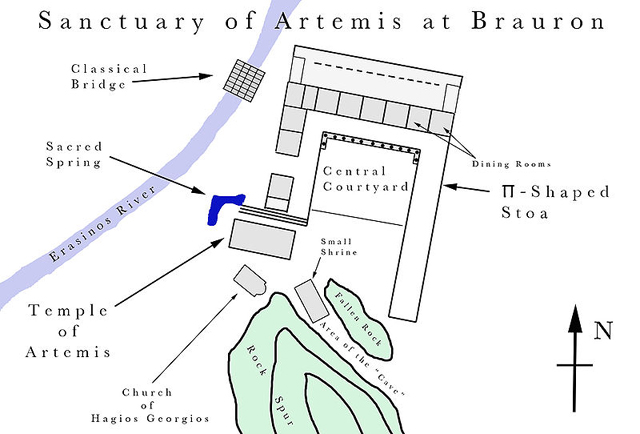 The unfortified site continued in use until the 3rd century BCE, when tensions between Athens and the Macedonians caused it to be abandoned, perhaps after the site was damaged in a flood.

Below one can still see the dining area were the residents of the Temple would have ate their meals; 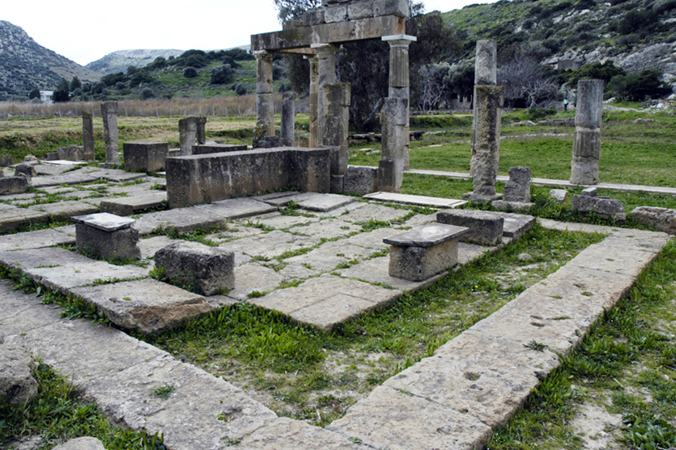 At the isolated sanctuary of Artemis at Brauron, young Athenian girls approaching marriageable age formed groups consecrated for a time to Artemis as arktoi, she-bears, and spent their time in sacred dances, wearing honey-colored saffron robes,[11] running races and making sacrifice. Vase paintings show that cultic nudity was an element in these preparations for womanhood. An epigram in the Anthologia Graeca concerns the offerings of childish playthings a nubile young girl dedicates to Artemis on the eve of marriage


And the spring into which offerings would have been thrown; 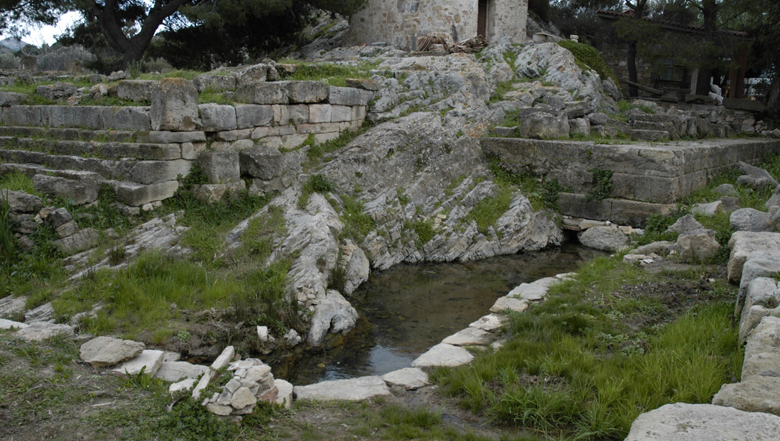 Below one sees the principle Deities associated with the site, from the right Zeus and Leto, parents of Apollo and Artemis to the left. 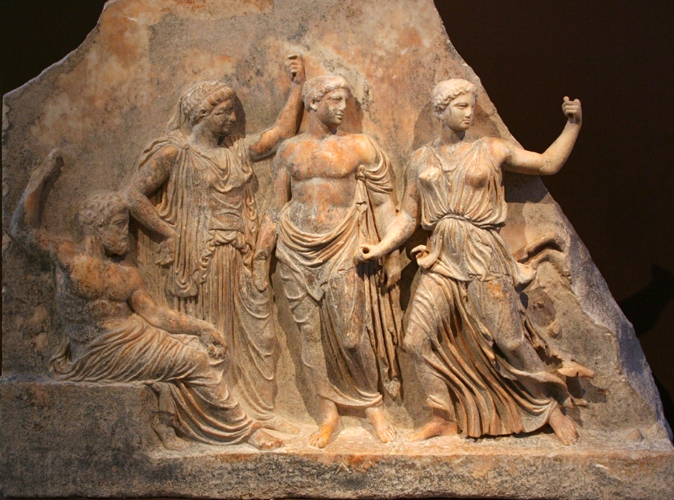 Cups with two handles are called krateriskos and particular to Brauron.

The cups are decorated with the paintings of girls dancing, running, or engaging in cult activities. These girls should be arktoi, the girls staying at the sanctuary to be guided by Artemis. 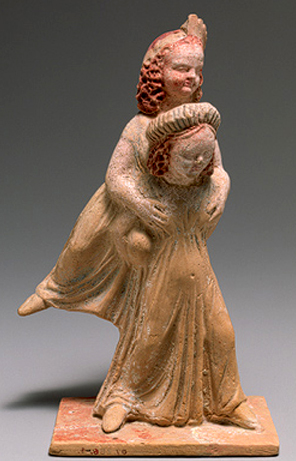 And you, Iphigenia, beside the holy stairs of Brauron you must hold the keys for the goddess herself: where you will die and be buried, and – as a delight for you –they will dedicate the finely woven material of woven cloth which by chance women having lost their lives in childbirth 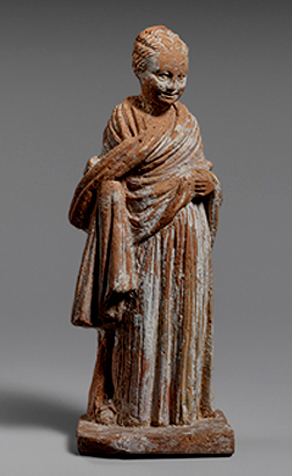 So why did the girls learn the way of the bear...?

The general explanation for the cult is as usual with Greek myth entirely unsatisfactory and ridiculous, along the lines that a bear attacked a girl, her brothers killed it, and as the bear was sacred to Artemis she made them adopt a bear cult in honour of it.


The actual explanation would involve the nature of the bear with regards to both it's fiercely protective nature and especially it's periods of hibernation, that it's symbolism is that of entering into the underworld and returning, in cyclic manner.

For this reason there were also bears associated with Artemis at celestial North, the Underworld of the Heavens as it were, and the point upon which the Heavens were seen to rotate on their axis.

The Southern skies in conjunction with the Mid-day sun were seen as the opposite polarity.

The essence of the cult then would have placed emphasis on the cycle of birth and death, and the neccesity of marriage and childbirth in ensuring continuation of the cycle.

Such was the wisdom of the she-bears. 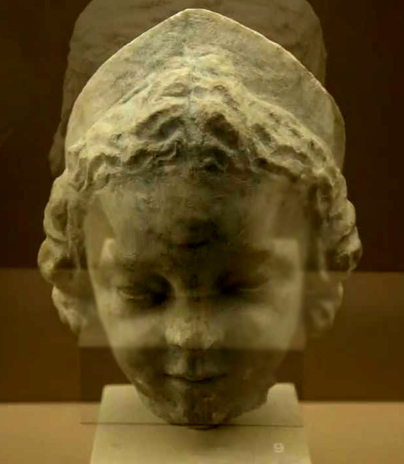 posted on Jun, 16 2013 @ 04:06 PM
link
Thinking I am familiar with the Greek Myths I know the tale of Callisto and her being among the stars and I have often photographed Ursa Major.

But I knew very little about the Brauron festival. Bravo

Could you expand more your premise of the reasoning?
edit on 16-6-2013 by abeverage because: (no reason given)


Certainly,the bear as an aspect of the cult is interesting, in that the hunting method of the bear when fishing is in knowing the times, season and place of opportunity, that is finding the right place in the river at the right time, lie back in the river with it's mouth open and the fish will literally jump straight in if the bear is wise.

Such basis for instruction could of course lend itself to all aspects of life, such as finding a husband, but in learning all aspects of the ways of bears they would be wiser than say a culture that teaches it's children about bears getting their heads stuck in honey jars.


The cult of Artemis was concerned with the cyclic patterns within life and death, the seasons and their return, and as i mentioned the hibernation pattern of the bear would have been instructive.


A basic symbol for this relationship is the cross, the two point polarities of Apollo being absolute darkness to light transition, and the cyclic repetition of this principle reflected in Artemis, as in the passage through the hours of the day or seasons of the year.

So to use the example seen in this video, one sees young Apollo, and his opposite non dynamic dark polarity, as well as the little she-bear Artemis and her hibernations...very instructive.


Brown haired Aphrodite as the love interest is just along for the ride in this one, a facilitator, and they all make the Leucadian leap within the context of the cult of Apollo, as sometimes that is the only way forward.


Synchronicity at its finest...


A normally dull star in Ursa Major, the Great Bear constellation, give off an incredible flare while scientists watched, increasing its brightness 15-fold in just three minutes, before returning to normal

Interesting how all stars shine, some more brightly than others, some with moments of incredible brilliance...

I do love how the Greeks although they adopted or assimilated the gods of past tried to find the balance within the Chaos.

To me what you describe with Artemis and Apollo is physical representation in culture of the Golden Ratio. Neither go only forward or in a circle but expanding into a perfect spiral. I imagine this is found in several cultures who lasted more than a few centuries. Perhaps when this is out of tune Humanity spins in circles or headlong into destruction (sort of like we are now...)

Yes you are right, the ratio of life, the manner in which Heavenly bodies move through the Universe, the basic building block of organic life.,,the balance.


Watch for the little flash here around the 3:40 mark

The cult itself doesn't bear much resemblance to the award winning poets and playwrights.


Such was the wisdom of the she-bears.


You're welcome, the Cult was certainly of greater statue and import than any awards society. 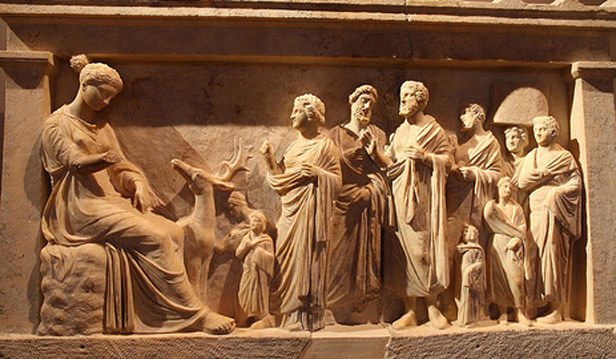 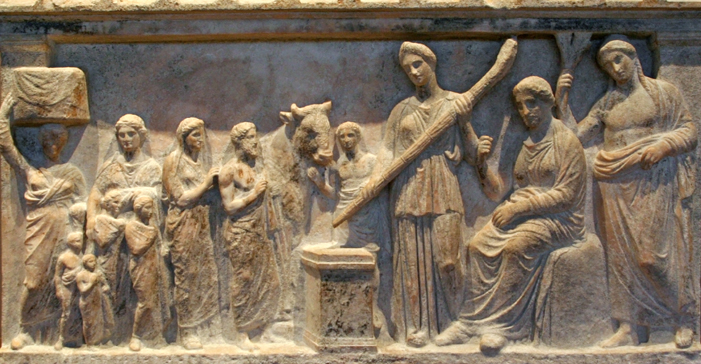