No knock, you're safe.

Knock? Show them this thread

posted on Jun, 16 2013 @ 07:16 AM
link
I think the chances of the FBIs name coming up on your router and it being really the FBI, make as much sense as there being a program with the name CARET which is an acronym for Commercial Applications Research for Extra-terrestrial Technology.

Just like all those other top secret prgrams like HAFAP (hiding aliens from the American public), Ceetwat (control the weather with advanced technology), and of course their secret disclosure project, Show and Tell, where Hollywood liberals like Spielberg and Lucas are given knowledge about UFOs that not even the head of Nato is aware of, so they can make films about alien brothers and prepare the peope for disclosure.

posted on Jun, 16 2013 @ 07:42 AM
link
Pretty sure it's just somebody messin' with you. That does give me a great idea though. I have neighbors who sit out with their laptop, trying to get on someone's/anyone's wifi. These are not the neighbors you want sharing your internet. Think I'll throw'em a curve.
On second thought, I'm not sure they're bright enough for it to mean anything to them.

There is 1 other couple on my street that would know how to connect to the internet. It is sparsely populated I don't even have a password on it (nor does the other neighbor). But it made me smile when I was setting it up.

My SSID is pretty straight to the point.....

Recently I changed it...

I always wonder how long people wait for my network to become available.

Originally posted by DAVID64
Pretty sure it's just somebody messin' with you. That does give me a great idea though. I have neighbors who sit out with their laptop, trying to get on someone's/anyone's wifi. These are not the neighbors you want sharing your internet. Think I'll throw'em a curve.
On second thought, I'm not sure they're bright enough for it to mean anything to them. [
/quote]
Put your neighbors address and apt# . If they are downloading illegal stuff, they probably would quit using yours

Maybe someone listened to me! 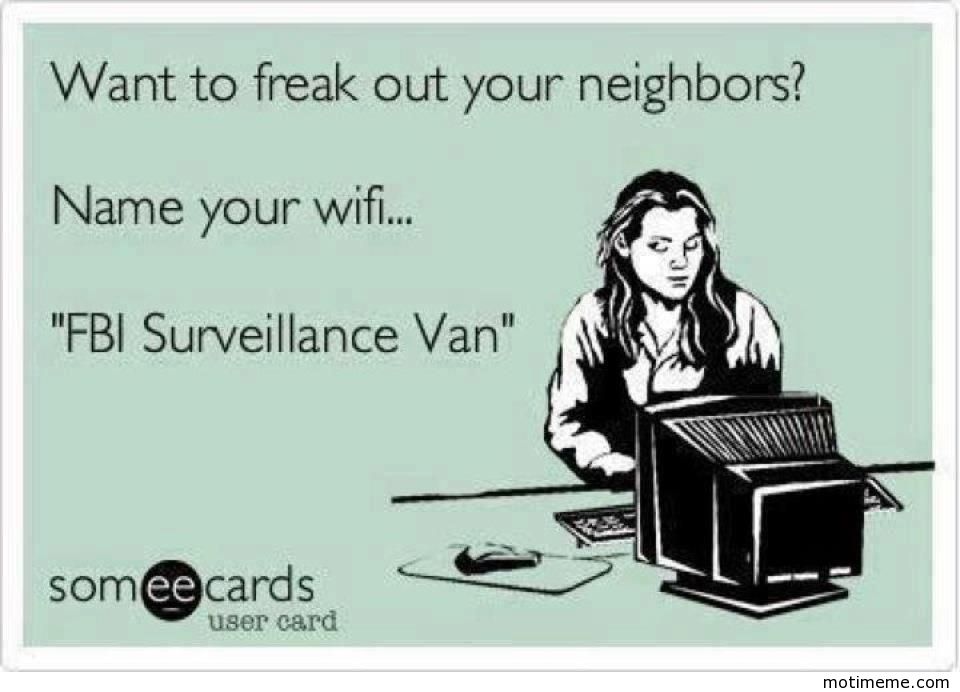 posted on Jun, 16 2013 @ 08:38 AM
link
Like somebody said is all about paranoia, but this is a good thing as some mess around with peoples calls and internet sending messages and links to FBI fake names it will bring awareness to the sleeping crowd about what is going on in the nation.

Too many people think that having the government spying on them is a good thing, until they actually get hit with FBI words in unknown calls and internet links and the paranoia just gets better.


How about NSA that is what is hot topics this days in our all free America.


Yeah, I have heard a lot of people name it NSA now...

posted on Jun, 16 2013 @ 09:16 AM
link
No.
This has been around for ages.
People have been naming their SSIDs everything from NSAvan to yourmom.
Basic searching on the interwebz would have told you that.

posted on Jun, 16 2013 @ 10:37 AM
link
Hey OP.. Something just occurred to me. You could have a little fun right back and change your SSID to something like "Jihadi Sleeper Cell #203" or something. Throw that number in to really give someone a head scratcher for a moment. (where are the other 202 cells? (gasp of terror)

Seriously though...Every router I've ever had, gives you the option to broadcast your name (SSID) or go silent and show nothing to the public while still being 100% reachable for connection.

If any agency in law enforcement were dumb enough to use equipment that broadcast an identifiable SSID for who they were? I'd go find their van to report them for terminal stupidity. They might shoot someone just cleaning their personal weapons with that kind of brilliance.

We have our guest login wifi named FBI Surveillance Van. Just to play the neighbors.

It does make me start to think of some other funny names.

LOL, I'm sure you guys can come up with some doozies

One of many ways I play with my gang stalker pets that surveillance me.

I live in Salt Lake City. It could be someone just messing around. Kinda weird that it just started happening to both of us though.