Protests by an increasingly forceful movement coalescing against increases in bus fares shook Brazil’s two largest cities on Thursday night, the fourth time in a week that activists have taken to the streets in demonstrations that have been marked by clashes with security forces.

Protests in Brazil against bus and underground fare rises have turned violent in the country's largest city, Sao Paulo, with violence also reported at protests in Rio de Janeiro.

There were about 10.000 people protesting not only against the increases in bus fares, but also because everyone here is just fed up with the government. Too much corruption, too much violence and poverty on the 6th biggest economy in the world.

But the problem, again, was the government and it's police. They cowardly shot tear gas and rubber bullets on people who were peacefully protesting or just passing by (many reporters say that the police shot first, creating chaos).

What really angers me is that all the great media networks of the country are backing up the government and the police, calling the protesters thugs and vandals . Only some journalists of these networks that where really there are speaking the truth.

Here are some videos and images that were posted by the people who were at the protest (i couldn't go, because i live almost 300 km from São Paulo, but i wish i was there).

WARNING! SOME STRONG IMAGES AHEAD

Here, a journalist from Folha de São Paulo was hit in the eye by a rubber bullet while she was sitting on a sidewalk talking with some other journalists:


Another girl hit by the police:


A lady who was just passing by, also hit by rubber bullets:


Protesters surrendering to the police, only to be shot after: 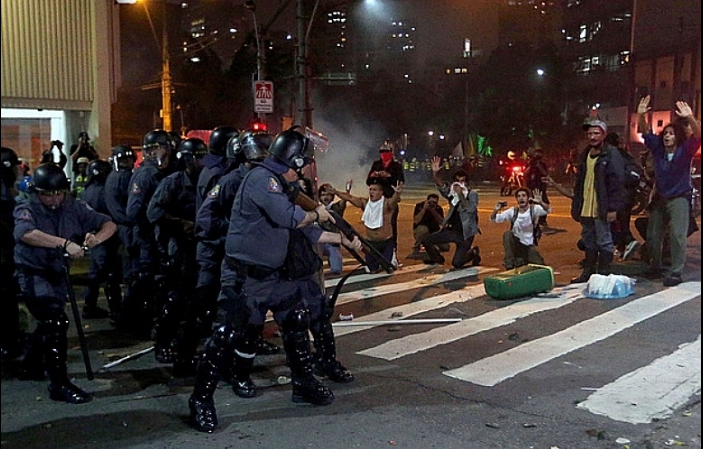 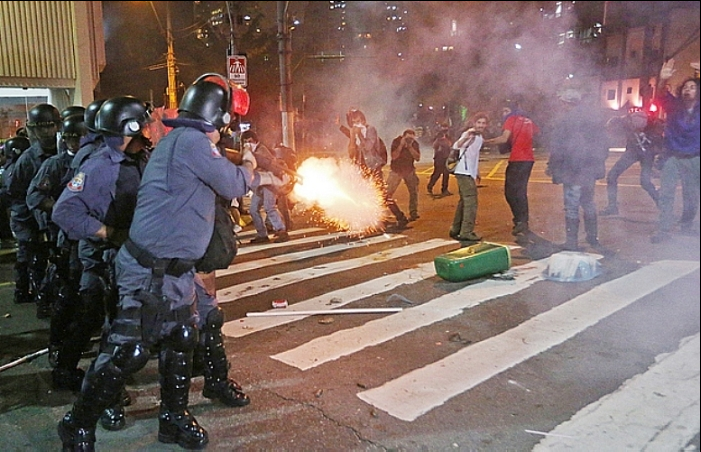 A homeless boy, that lives on one of the streets engulfed in chaos, was shot in the leg by a rubber bullet. Some people took him to a drugstore to receive treatment:


Here is a video of some people who were chanting "No Violence!" until the cops shot rubber bullets at them.

And here is another one:

Here is the police shooting at the press:

This video shows some people trapped on a street and being bombarded with tear gas:


Anyway, my point is, things are not looking good for now. And i thank God for that. The protests will continue on Monday (more than 15.000 are believed to show). It's the beggining of some needed changes, i hope.

Share these images and videos if you can. People have to know about this.


Odd this happened a few moments after Turkey have it's own riots what's going on?


As i said, I think that people can't stand their governments anymore. That is happening worldwide.

Here are more pictures from the riot:

Pictures from the riot in São Paulo

posted on Jun, 13 2013 @ 11:59 PM
link
And yet so many Americans still believe that only the police should be armed...just in case they have to fire on unarmed citizens of course.

Give up your right to protect yourself, write a nice letter, carry a protest sign...and please report back as to how effective it was in stopping your police state...if you still can.

It is truly happening in that the only way to stop violence is with violence. Isn't that what all the US occupations around the World are based on?

But not for the lowly citizen.


I will be traveling to Brazil next year coming down from Costa Rica. I have made many friends in all the countries in Central America and only made it to Colombia last year. Those picks look horrible I hope things get better.


Do you want a advice? Don't even bother to come. It's not worth it.

Because of the World Cup and the Olympics, the brazilian propaganda machine it's working 24/7 to bring tourists to Brazil, showing our beauties and that's all (of course). Sure, we have our good side, but this country is a mess right now.

posted on Jun, 14 2013 @ 12:27 AM
link
What gets me is how people don't fight back . Obviously the police are crossing the line and they will continue to do so until people stand up and defend themselves and hold these brainwashed thugs we call police accountable for their actions they will carry on with the same old ruthless attitude . These our countries the peoples not the corrupt politicians and business leaders . Some stupid cop shot my wife in the face with a rubber bullet or cause her harm in anyway for voicing her opinion in a democracy I would go ballistic

We are in bad and dark times for humanity at a global level it really is coming down to the people vs the establishment . Honestly I don't think it will fare to well for the people the establishment refuse to relinquish the control and in most case do not leave with out force .

Originally posted by Canslli
reply to post by Grimpachi
. Sure, we have our good side, but this country is a mess right now.


All of our countries are a mess brother

Do you know why they riot or are u an anarchist?


I have been to Iraq and Afghanistan. Mexico was a little scary so was Honduras I was fine everywhere else when I was in Colombia I was harassed a little but I usually play everything off that I am Canadian that usually calms things down. Lie to live oh well it’s better than dyeing. I am still coming down on my way to Antarctica visiting every country. Thanks for the advice but a little danger makes me feel alive sometimes I will make sure to plan ahead more than usual.

Both in Mexico and Honduras I bought a handgun for protection and ditched them near the borders I may do the same there.

posted on Jun, 14 2013 @ 01:54 AM
link
Lol. See, bus fares increase in Brazil and it causes rioting. A massive surveillance system spying on everyone is revealed in the U.S. and people don't notice.

I'm not downplaying this, it probably is tied into other things, as well.
edit on 14-6-2013 by darkbake because: (no reason given)

Originally posted by darkbake
Lol. See, bus fares increase in Brazil and it causes rioting. A massive surveillance system spying on everyone is revealed in the U.S. and people don't notice.

I'm not downplaying this, it probably is tied into other things, as well.
edit on 14-6-2013 by darkbake because: (no reason given)

I think in this case, because the World Cup is coming there next year, the Government are trying to clean the streets up and see a protest as a way to get rid of some people who live in the ghettos and on the streets!

I was there in 2003, didn't have any problems and was even taken for a ride into a shanty town!

I really enjoyed myself there..... in RIO. I hope things get better for you guys.

The thing that bothers me the most about all of these riots happening is that you never see one policeman on the side of the people. Never one that agrees with the people's cause. Only ones that hit them with armored cars and shoot them.

posted on Jun, 14 2013 @ 02:29 PM
link
Brazilians are not known to get out on the streets and protest. This is really uncommon over here.

But now something happened. I don't know how to express myself, but something huge happened. Finally some people started to wake up.

As i said before, there is going to be another protest on Monday and, so far, 85.000 people are expected to be there, and some of my friends amongst them.

I hope nothing bad happens.

Wake up and take back Congress, if you still can.

posted on Jun, 15 2013 @ 01:09 PM
link
Just to keep this thread updated, the event on Facebook that it's being used to organize the next protest has reached 151.000 people that are expected to protest on Monday. This number might reach 180.000 until there.

I was watching the Globo Channel, the biggest TV network in Brazil and one of the biggest in the world, and i was disgusted with what they were showing. They almost didn't show the police violence against the protesters, and only focused on the garbages burning and vandalized buses, saying that the manifesters were "leaving a path of destruction behind".

They are 100% behind the government and the police and, the worst of everything, is that a part of the population believes them. They have to protect their agenda, after all.

The best part of all this is that is a nonpartisan protest. The people who are organizing this are always telling people not to bring party flags, only brazilian flags.


Thanks for the update and play safe.

Originally posted by shockedamerican
Y do u people condone the riots? The people loot, rape and kill. Yet you root them on?

Do you know why they riot or are u an anarchist?


If you have to ask why...You truly don't understand.

Please provide any proof of these riots where the people are raping and killing. I can provide a million references where the Military is guilty of these crimes tho.