Their reasoning for not reporting it for a week and a half ?
It took 10 days to figure out just how much was actually spilled and that it was not toxic to wild life
Apache officals and the Alberta Gov't claim, is that it is only salt water. Really ?

It is waste from a oil and gas opperations system. How could it be plain old salt water ?

It isn't it is full of other than salt such as, petroleum toxins and heavy metals, hydrocarbons,
sulphurous compounds, chemical solvents and radioactive materials.
The levels of salt in the waste water is extreamly high.

No it's not any thing to worry about or a need to take action pronto
edit on 13-6-2013 by azureskys because: added more

posted on Jun, 13 2013 @ 08:23 PM
link
It happens all the time,never reported. Sad but true. Have you heard about the oil spill in Ecuador which brazil is having to prepare for? Thought not,see. 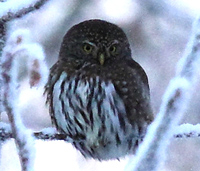 This little Pigmy Owl does not look very safe to me

The area of the spill:


It is located in a muskeg or wetland area, habitat of birds, lynx, woodland bison, wolves, moose, woodland caribou.

The substance is the inky black colour of oil, and the treetops are brown. Across a broad expanse of northern Alberta muskeg, the landscape is dead. It has been poisoned by a huge spill of 9.5 million litres of toxic waste from an oil and gas operation in northern Alberta, the third major leak in a region whose residents are now questioning whether enough is being done to maintain aging energy infrastructure.


Chambaud said the 42-hectare spill is so large it raises questions about how long the pipeline that carries water used in oil and natural gas operations had been leaking.

He said some band members believe the pipeline had been leaking since the winter, but no one noticed it until earlier this month.

“There are indications that the spill occurred earlier, during the winter season, but due to ice and snow it wasn’t discovered.”

Chambaud said water from the spill has leaked into a stream that runs through a small aboriginal community and onto land used by band members to hunt and trap.


From another report:
www.examiner.com...

“Every plant and tree died,” said John Ahnassay, Chief of Dene Tha First Nation. Apache is claiming that know Wildlife in the area has dies, but the Dena Tha suspects waterfowl has died from the spill


Thank you for the other sources to read.

I see that it is believed the pipe broke quite some time ago, like a couple of months back.flame:

Arn't there some type of sensors along the pipe-lines that can detect a change in the temperature levels,
rate of flow,..... some way to monitor the lines ?


A First Nation wants answers from a Texas-based oil company after a pipeline spilled 9.5 million litres of industrial waste water in northern Alberta.

Dene Tha' leaders are to meet Monday with Apache Canada Ltd. officials in the remote community of Assumption.

Sidney Chambaud, a band councillor, said they want more information about what happened and what the company is going to do about it.

"There are wildlife impacts and water and land impacts," Chambaud said in an interview Thursday.

"Right now within that area the trees, the vegetation and the soil are dead. The water is contaminated."

Members of the Dene Tha First Nation near Zama City are worried about the effects the waste water spill could have on their traditional territory.

The Dene Tha is made up of three communities and eight reserves, spanning 75,000 acres surrounding Zama.

“These impacts do have impacts on our traditional ways of being out on the land. Right from burial right to vegetations which we use for spiritual healing,” said Sidney Chambaud, a councillor with the First Nation.

Chambaud said the area around the spill is an ancient hunting ground for the Dene Tha.

Rachel Notley, environment critic for the Alberta NDP, said the time it took for officials to learn about this spill and release information on it is unacceptable.

“The fact of the matter is if you drank this processed water you would probably die,” she said. “If it kills things, it should not be allowed to run unchecked and it is the largest release of poison into the environment in the history of this province and this government took 12 days to tell us about it.”


Along with other other major spills, that have killed off wildlife in Alberta, it's a wonder that anything,
including human life, still exists there.


One spill last June near Sundre fouled the Red Deer River after about 475,000 litres of oil spilled.

Earlier this year the province charged U.S.-based company over an April 2011 breach near the community of Little Buffalo in north central Alberta following a spill of 4.5 million litres of oil.

"This government can't be trusted to protect our air and water," NDP member Rachel Notley said of the Apache Canada spill.


I just heard about this. What a horrible, horrible tragedy. This water contamination is very serious if it kills all trees it comes in contact with. Imagine what it is doing to wildlife. The Dene have just got to be seriously devastated as their way of life there has now been destroyed. I sure hope nobody drank the water.


This is an important issue so I'm commenting to thank you for bringing it the attention it deserves. As always, the environment comes first and oil after. If intelligent enough to drill for, pump, and transport it should apply some of that brain power to making sure it can not affect the earth in negative ways. People need to get their priorities straight.

posted on Jun, 13 2013 @ 11:41 PM
link
Same with that other spill in the US.. last month? Remember, they inducted a no fly zone over the community so no pictures could be taken?

Everyone was paid off?


Not sure if you are refering to the Mayflower,Arkansas or another spill, but here is something to think about


All spills in order of occurrence:

Sunday, March 31: A power plant in Lansing, Michigan USA
16 barrels of an oil-based hydraulic fluid spills into the Grand River

Tuesday, April 2: Nembe, Nigeria
After suffering a reported theft of 60,000 barrels of oil per day from its Nembe Creek Trunkline pipeline, Shell Nigeria shuts off the pipe for 9 days to repair damage.

Maybe you were talking about "Bay Springs" in Mississippi:
msbusiness.com...

The Bay Springs oil leak that polluted wetlands and waterways four months ago was the state’s costliest pipeline accident in a decade at more than $5.2 million, according to a federal agency that tracks such incidents.

Some 122 barrels of crude oil had drained from the Plains All American pipeline before officials noticed the leak on Feb. 5 and shut down operations, according to a company report filed with the U.S. Department of Transportation’s Pipeline and Hazardous Materials Safety Administration.

Does anyone have any pics from the area affected? I would love to see pictures released in the local media in Alberta and BC considering the uproar around the northern gateway pipeline.

I hope the citizens of Alberta take this spill seriously. I know from talking to people in Alberta who have had a long history of the oil industry that spills and other accidents seem to be accepable consequences of industry.
If this spill occured in BC there would be thousands of people up there chaining themsleves to moutains in order to stop the pipeline.

My point is that there is a marked difference in environmental awareness between these provinces. Alberta as a history of oil, BC has a history of protecting the environment. I don't know if Kinder Morgan or the Federal Gov't realize this.

There is a large area of habitat in northern Alberta that is now toxic, this is exactly what BC residents are stating is the major reason not to build a crude oil pipeline to the west coast. It's not about the money. That and the much larger threat of a spill in the pristine waters off the northern coast.

Is there a Canadian who can tell me when and why Canada turned its back on Mother Nature?

I always respected the different attitude they had up north from down here. I'm losing respect now.

posted on Jun, 14 2013 @ 12:02 PM
link
To clarify, produced water is essentially seawater with a touch of oil. A spill this size would only have a few barrels of oil in it. The rest are Mg, K, and Na chlorides (which is what killed the plants).


The industry and the government called it salt water but the local Dene tribe claim the "toxic substance contains hydrocarbons, high levels of salt, sulphurous compounds, metals and naturally occurring radioactive materials, along with chemical solvents and additives used by the oil industry."


Hre is one Pic from the spill: 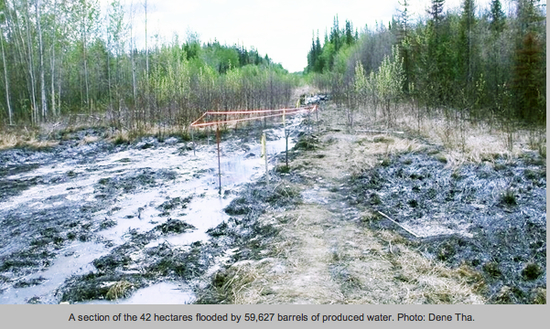 The spill is in Canada. Same country that fired all their Scientists when they were screaming foul because they noticed no more Salmon were coming into Alaskan streams from the Pacific Ocean.

There's people starving up there now because they don't get enough fish to get them and their dogs by for the winters.

It's going to get much much worse for Canada.


People throw around the word "toxic" without really understanding what it means.

The Harper government happened. They have no environmental policy, only corporation appeasement. It focuses only on its financial plan even though they are spending billions and billions and putting us further back.