posted on Jun, 11 2013 @ 05:38 PM
link
Well, the Luciferians are at it again - not that they ever really stopped. Kanye West has a new song where he boldly proclaims his divinity. The song is called, "I Am A God." And what kind of "god" is Kanye West? Well the kind of "god" that desires backrubs, threesomes, and expensive cars:

He then goes on to try and convince people that he's still a Christian by saying, "Even though I'm a man of God/ My whole life in the Hands of God/"

Well, Kanye, that's true. Too bad you don't really believe it. If you did, you wouldn't proclaim yourself to be divine.

Then he proceeds to compare himself to both the archangel Michael and Jesus Himself. In fact his upcoming album that this song is included on is called "Yeezus" which is combining the last half of his first name and the name Jesus.

This isn't the first time that the Luciferian Kanye has compared himself to Jesus. Remember his Rolling Stone album cover from back in 2006? 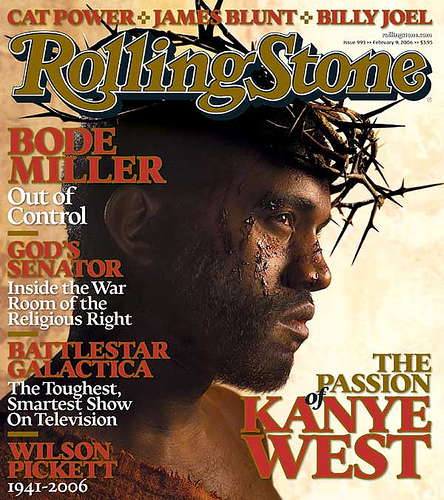 Another interesting fact about the song? It was produced by the techno group Daft Punk, who are known to perform in a Luciferian pyramid at their shows 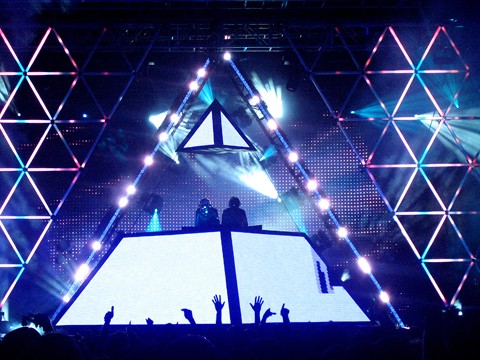 Also, back in May one of the Daft Punk members died. His name? "Romanthony." Roman, which is the name of the demonic entity that possesses Nicki Minaj and that Luciferian Lady Gaga sings about it.


May the LORD allow LIGHT to guide the to the if their intentions are so... Peaceful.. for its the WILL of EACH individual that weighs most when considered least.

posted on Jun, 11 2013 @ 05:53 PM
link
I do not understand why people allow themself to become distracted by these "artists" and their antics.

You do know that "they" fed off your attention, right? Your actions here are actually helping their "agenda" because you spread their manifesto by drawing attention to them.
edit on 11-6-2013 by cry93 because: (no reason given)


I'm familiar with this argument and I disagree with it 100%, respectfully. That's like the argument that some people make that we should just ignore certain hate mongers. Ignoring a problem does not make it go away. Sure, exposing stuff like this may pique some people's interests. Can't stop that. But at least it may also open people's eyes to what they are doing. If we can open one person's eyes it's worth it. But doing nothing? That just allows their agenda to go on unchecked. If they can spout their Luciferian self-worship, then we can expose it and hopefully save people from the trap.

posted on Jun, 11 2013 @ 05:59 PM
link
I'm just guessing here ... but I think it's a safe one. I don't think 'ol Saint Peter will be humming one of this guy's tunes as he floats up to the Mighty Podium before the Pearly Gates to discover which direction he's headed. I really doubt Peter will even have a smile on his face. More like a sad, sad frown of resignation.


Well while I do not believe Kanye West to be part of some Luciferian cult, I can honestly say that Kanye West is by far the most conceited, arrogant, waste of space in the entertainment industry and this story just further cements that fact in my mind.

You are not a god Kanye, and if you are you are more useless than the ones people actually worship.
edit on 11-6-2013 by Openeye because: (no reason given)

posted on Jun, 11 2013 @ 06:11 PM
link
Daft Punk? Romanthony sang in one song in 2001 for them...Using a Pyramid is proof they are Satanists? oh come off it.
Glastonbury has a pyramid stage I guess everyone performing there is a satanist too...

I wonder if in some alternate universe instead of pyramids being the great evil symbol of the Illuminati, its a cube, or a watermelon or something.


Why is it that people who do not believe in this stuff can't voice their disagreement in a respectful manner? Instead it's all insults and condescending tone.

To answer your question, no, performing in a pyramid does not mean that they are Luciferians. They may not be. I dunno. But the pyramid they perform in is not a normal pyramid. It's one similar to the Masonic pyramid on the back on the dollar bill with the all-seeing eye.

posted on Jun, 11 2013 @ 06:19 PM
link
That's his public persona. Many artists have them these days. And the more shocking, the better. In real life, he's probably just a guy with a few hangups and imperfections, like us all. Don't judge the cover of the book until you read it.


BH, oh, I've read it. Back in the day, before I woke up, I was a big fan of rappers like Kanye and Jay-Z. Now I see them for the Luciferian devil worshipers that they are.


lol Absolutely. Could be.


Right first you said that Romanthony was a member of Daft Punk...he isn't he sang in one song over 12 years ago and I pointed that out, also just because I disagree with you because you account anything to being a Satanist like Daft Punk playing in a pyramid does not mean Iam a troll Iam simply disagreeing with you.
Also look which forum you posted this in...
If you can't take criticism and people disagreeing with you grow thicker skin.


Sorry, but I just don't see how proclaiming yourself a god, on an album where the title is comparing you to Jesus, is mocking the powers that be. I don't see any sarcasm in the song at all.


I know exactly where I posted it. I posted it here because of it's highly speculative nature. Perhaps you should read more about the forum:

EXTREME THEORIES without CORROBORATION are EMBRACED in this forum.

My skin is thick enough. That doesn't mean I have to put up with people who like to talk to others in condescending tones all because they disagree.

BTW, I thought you were leaving the thread. You said so yourself "Cya Iam out."