posted on Jun, 10 2013 @ 11:14 AM
link
i was down the beach with my dog last thursday and was taking a paronamic photo but sun was in my eyes so didnt come out way i wanted.
i blew this picture up on my pc and on the right hand side i noticed a black triangle.
what it is i dont know. i used an iphone 4 to take the photo.
any thoughts?


Its pretty obviously a bird in flight. You can even see the feathers at the end of the wings

The part on the right of the object in question (a broad and slightly vertical part of the object) could be the wing closest to the camera. There is another smaller horizontal component on the left side of the object, and that may either the tip of the other wing beyond, or maybe the bird's head or tail. My opinion is that part on the left is the wing beyond or the tail, because I think the bird is flying left to right -- although it is hard to tell exactly.

Do you have a larger (and higher-res) version of the picture?

this is the beach where i was and as you can see it was deserted at that time...

Originally posted by scotsdavy1
there were no kites where i was and how it is a bird is a bit much.
this is a blown up part of the triangle, best i can do.

I wonder if the overall shape of the object as seen in the image is being affected by the fact that it is near the edge of one of the "stitching lines" that make up the panorama (as seen by the horizon line directly below the object).

this is the beach where i was and as you can see it was deserted at that time...


Its wings are flapping because it is in flight. You can clearly see even in this pic here you blew up that there are 2 triangular shapes overlapping. And this is the beach. It is not even remotely out of place to expect to see a bird flying in this area.


very well could be as you say, just thought it a bit weird...


As you say it could be due to the stitching of the photos and not a bird as others suggest. I do know what a bird looks like for heavens sake as some have laughed at!


Well, I'm not seeing a bird either. I did do a Google search and could not find any triangular birds As far as the stitching goes, I am not an expert by any means, it looks as though the line is to the right of it. Anyone else see it?


Not a bird. Probably not a kite, but I guess it could be. Computer glitch-probably not, it most likely would be squares if so, but it might be. Triangle shaped UFO? Perhaps. I'd say you have a 50/50 chance that you caught one. Strange glitch on the right edge, but that could be from the image stitching you mentioned.

I have a clue for all of you. Triangle shaped UFO's have the drive unit from a disc shaped UFO at each corner. And most likely what I call an "Interstellar Drive" at the center.

Look at the terrain below the object. Notice how it is uneven? It is obvious that the photos were "stitched" together. You only caught a piece of what was in the original image.

posted on Jun, 10 2013 @ 04:06 PM
link
Yes it was stitched together to make a panoramic view but the sun was too strong that day so that's why the outline is uneven in places. Usually I can make them so that it is hard to see the join so to speak. I never noticed anything in the sky but only saw when I reviewed my pictures on my laptop. I'm not saying its a ufo just wondered what it might be as there were no kites up and no way is it a bird. If I had seen it i would have zoomed in on it and made a better photo but as you can see, it's way out to the right of the segment. That was the last of the group as I took them from left to right.

posted on Jun, 10 2013 @ 04:17 PM
link
I see TRIANGLE birds all the time... and round ones that glow and make right angle turns at unbelievable speeds.. Yes, that is definitely of those pesky TRIANGLE birds if I ever saw one..

But it's not a UFO, it's one of those secret manmade 'planes'; a delta wing and it was going so fast, that only one frame caught it.

Use logic people and stop calling it a bird........ unless you are a shill.

posted on Jun, 11 2013 @ 12:14 AM
link
It's a bird.
Here is a pic of obvious birds in flight, taking off and landing. There is no question these are birds. I see multiple triangular shapes in this pic. Zoom the pic out just a little more and you'd see more. Closer to what we see in the OP.

It isn't exact, but I was just looking for a pic that had obvious birds in it to make my point. 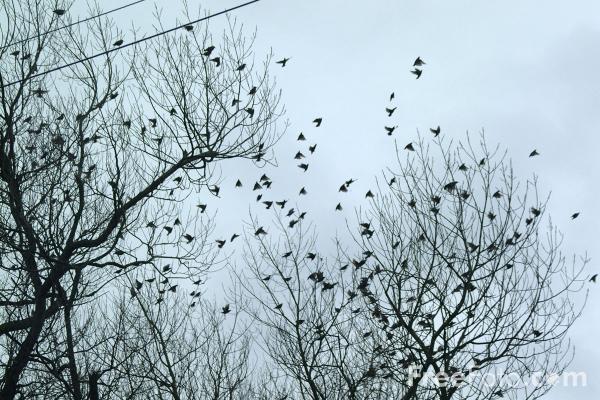 
My thoughts the iphone is RUBBISH at panoramas next time take individual pictures and if you have a PC download Microsoft ICE a free download it will do a better job.