posted on Jun, 10 2013 @ 01:22 AM
link
Growing up we lived on a lake in central Florida and as kids my brothers and I would find prehistoric arrowheads along the shore of the lake. I have collected them ever since and it is a hobby that I share with my children and whenever we can we take to the local fields and walk in search of them.

Eventually I became curious as to how the prehistoric indians made these beautiful, razor sharp spearpoints, projectile points, blades, and tools out of rocks so I set out to learn how they did it. Finally after several years of practice I became decent enough at it to make my own arrowheads and I got really into primitive archery and have been an avid primitive archer ever since.

The great thing about knowing how to flint knap is that if you know what to look for you will never have to go without a knife, scalpel, or spear/arrowhead. As long as you can find a good cryptocrystaline rock such as chert, flint and onyx or any of the agatized rocks such as coral, wood, and bone as well as the volcanic glasses including felsites, rhyolites, tachylyte, and obsidian you can make a blade that is sharper than steel. You can also use thick glass such as from beer and pop bottles.

A small tool kit of a hammer stone or bone/antler hammer for working with percussion striking on core stones, and a small assortment of antler or bone "punches" of assorted sizes used for pressure flaking of small flakes in finish work or resharpening is all that is needed to produce a viable knife blade or spear point.
With patience and practice anyone can learn this millennia old skill and never again be stuck without the tools they need to survive.

Scientific testing has proven that a properly struck flake off of a core of high quality chert can actually be sharper than a surgeons scalpel and even once dulled can be resharpened through fine tipped pressure flaking to it's original sharpness.

There is plenty of information on the web detailing the technique used to make tools from stone and some really great videos can be found on Youtube. One word of advice if you are going to attempt this is to wear leather gloves and eye protection when practicing. The flakes when struck from a core piece can slice deep into your hand and when percussion flaking they can hit you in the eye and cause serious damage. This has lead me to wonder how many blind prehistoric indians were out there.

Glass and Obsidian are the best to start off with when learning because they are more brittle and easier to work with.

A good place to start


That was a good geography lesson. I am fascinated by arrowheads and how they got these to break just right and then put them onto sticks. I imagine a lot of trial and error to see how it works is the best way to start. Thanks for sharing.

i love to knap, though i feel that if TSHTF then most folk would die of hunger while banging rocks together and making nowt but a pile of rubble

my own initial experiments to learn the skill from zero knowledge back this up..... it's a lawful craft and without knowledge of certain principles all one could create is cuts and bruises and accidental sharp flakes - making decent blades takes real time and a methodical approach as well as a sound understanding how the materials and shockwaves behave.
Most folk in TSHTF would be better served beating recycled metal for tools. imo for a novice, blacksmithing simple tools is easier than knapping, but thats just my take.

as for how ancient knappers avoided injury, controlling how one produces flakes becomes easier with time, and a disciplined approach and experience means that an expert will know where the debitage ends up... i wear goggles and use copius leather pads on hands and legs though, and still have myriad cuts from making stuff. interestingly, Ishi had his own proceedure when a flake hit his eye... basicly banging his head to dislodge it while pulling his eyelids fully open.

i wrote a thread a few months back on starting a knapping kit on a budget, some here may find it of use

Flintknapping on the tightest of Budgets

and here is a glass knife i knapped on thursday 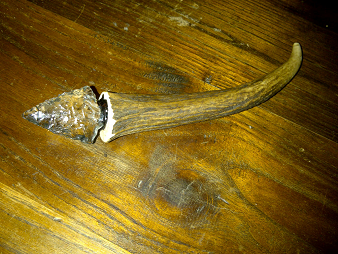 i almost made a mahoosive glass spearhead too but forgot a simple rule of thinning and broke it in two..... happens alot at my level in the craft and when i return home tomorrow the two bits will most likely try to be knife blades.
edit on 10-6-2013 by skalla because: typos and ting

posted on Jun, 10 2013 @ 08:16 AM
link
Knapping. You can't beat it.
You'll have a spall!
People with no knowledge of it won't recognize it's importance - thus the lack of responses.
It's a very demanding craft that requires the patience of Job.
Another reason the general public will never try it.
But as you said it really is the first survival skill needed if you have absolutely nothing in the way of tools.


I will have to share this with the boys. We are always looking at alternative ways to hunt and protect our home. They're dad is an avid arrowhead hunter. We have quite a collection, I think knowing how to identify wheat and grains growing in the wilds and having a matate to grind is as important. A grinding stone and pestal. (spelling)
edit on 10-6-2013 by antar because: spelling mistakes all over the place...


I agree,most will go to blacksmithing before trying this.Not sure who posted a similar post on knapping a month or so ago,but its a learned skill to me.Even if you had a glass cutter and a pane of glass,it will still take a bit of effort.I'd personally lean to casting copper or zinc pennies.Easy to sharpen and resharpen on a rock,and making a mold of clay to cast them in is easy enough.Wish I had the patience to learn this tho

I'm not very good, but I get a sharp edge most of the time...

Very, very useful skill to have under the right circumstances.


absolutely, and if the glass was cut to shape, a novice would be totally stumped by the flat edges - one of the challenges of knapping that is very very hard to solve without knowing the right procedure for "turning the edge" or alternate sided flaking.

as for melting coins into tools and weapons, you've given me a great idea for a future project - thank you


while I appreciate the "lost art" of survival skills,I still think most people will resort to what they know,or can easily learn,such as casting or blacksmithing.Besides,even if I knew what flint looked like,I'd never master knapping before I starved! I'm sure scrap metal will be easier to find after SHTF.Heck,cut a piece off a car fender and trim into shape.

This has been one of my favorite websites for years!
I don't knap, but am a very amature rockhound.