N.S.A. or No Such Agency as they were referred to for the longest time, due to their very name and existence being classified at one time in the past, represent a vast and under reported arm of our Government and intelligence community. They've been doing many many things to watch many many people and all this, for many many years.

I open this thread, not to rehash or even discuss the headlines of today. That is simply the latest scene in a play that started it's run a very long time ago. I open this thread to allow people to see what the NSA has been doing in our names for longer than many here have been alive. Certainly longer than most have been aware of just who the NSA is or where they operate. Previously, that hasn't meant to include the United States. Obviously? Times..they are 'a changin. Not for the better.

Cryptome Presents ......the work of many and the collections of much in....

The Life, Times and Methods of the National Security Agency

(and I can feel any hope I ever had of getting so much as a confidential level clearance fading by the moment..lol)

The Recent Documents of the NSA (For Reference)

There should be enough data there to keep you all busy for awhile as well reading some very interesting things about just how it's all come to this point. It covers operations, programs and methods of operation from 1995 to present and ranging from TEMPEST to PRISM. I wish I could say Enjoy ...but somehow? That doesn't feel like the right word on this one.

posted on Jun, 8 2013 @ 03:15 PM
link
Glad that you made this thread. In terms of agencies, I like to use this analogy as far as their public roles go--the FBI is the "good cop", CIA is the "bad cop", and the NSA is the "cop behind the one way glass". Most of the time, people forget about them but they are probably one of the most interesting (and secretive) agencies that there is. They are big on cryptology, intelligence collection and they even recruit high school seniors from the Gifted and Talented program to work for them during the summer. No kidding: www.nsa.gov...

My youngest is in the G&T program in the 5th grade and this year, they were learning all about prime numbers, perfect numbers, mersienne prime numbers and more using tools such as pattern seeking and the sieve of erasthosthenes to sift these numbers out along with classic number riddles and games. These types of numbers are important for cryptography. Considering the recruitment into the cryptography agency during the summers from these programs, these lessons make sense for a specialized education program like G&T. It's just kind of weird to know that the NSA may have had something do with my 10 year olds number games this year. Still not sure how I feel about that.

As a quick rundown on general history, the first incarnation of the NSA--the Armed Forces Security Agency--was formed in 1949. In 1952, President Truman authorized the formation of the NSA. I remember reading that the first headquarters for the NSA was Randolph/Lackland outside of San Antonio, Texas but can't find that information again to confirm. However, the NSA still has a hub in San Antonio called the Texas Cryptology Center at Lackland AFB. Lackland and Randolph are part of the Joint Base San Antonio. Another "fun fact" about this base is that this was where many Operation Paperclip scientists were stationed.

Originally posted by Wrabbit2000
N.S.A. or No Such Agency as they were referred to for the longest time


You left out Never Say Anything.

posted on Jun, 8 2013 @ 04:54 PM
link
NSA is the signals crypto arm of the DOD. I'd like to know how them running surveillance within the US is not a violation of posse comitatus.

Originally posted by defcon5
NSA is the signals crypto arm of the DOD. I'd like to know how them running surveillance within the US is not a violation of posse comitatus.

Originally posted by defcon5
NSA is the signals crypto arm of the DOD. I'd like to know how them running surveillance within the US is not a violation of posse comitatus.

Because it most likely is a violation of the Posse Comitatus Act. That's why the history, location and formation of the NSA is so pertinent. As I said in my prior post, the NSA was originally the Armed Forces Security Agency and its hubs/hq are, to this day, located on military bases within the US. It's fairly safe to say that the relationship between the NSA and the Armed Forces, towards whom the Posse Comitatus Act specifically is directed, is so close as to be nearly indistinguishable by an outside observer standard. Therefore, it would be reasonable to assume that operations taking place by the NSA within the US against citizens, specifically to enforce laws, would be a probable violation of the Posse Comitatus Act.

posted on Jun, 8 2013 @ 06:41 PM
link
All this stuff, the massive total awareness nsa complex put in Utah, the genetic and geo terraforming, and no one on earth has any idea how to stop it. It's like some kind of alien invasion/takeover. Remember, I said, "it's like"...

Originally posted by misschareesee2
All this stuff, the massive total awareness nsa complex put in Utah, the genetic and geo terraforming, and no one on earth has any idea how to stop it. It's like some kind of alien invasion/takeover. Remember, I said, "it's like"...

Nope, pretty sure it is an alien takeover as that actually stimulates less cognitive dissonance than what's in the papers as of late. It's kind of funny for me to say that, too, as I grew up in a family where the rules were to always consider yourself being potentially under surveillance (military family). On one hand, the recent revelations about the NSA aren't terribly surprising to me but that doesn't mean that I a. accept it or b. like it. Can we please just say it is an alien invasion? Pretty please?


Actually it is, but the problem is that when groups like defenders of constitutional rights come forward and challenges certain laws, acts and procedures they hide behind secrecy, then when this issues are brought in from of the courts the courts side with the government agencies.

Is been allegations of violations privacy and constitutional laws over and over none of these agencies and the courts involved neither congress can claim ignorance because they have been warned in many occasions and is records of such warnings.

This has created a great danger in the US because in the last few years the different agencies emboldened by the lack of control and record of courts in their side are running rampant surveillance and spying within the US is beyond control as they do not talk with each other when they do their spying.

In other words nobody is controlling them. 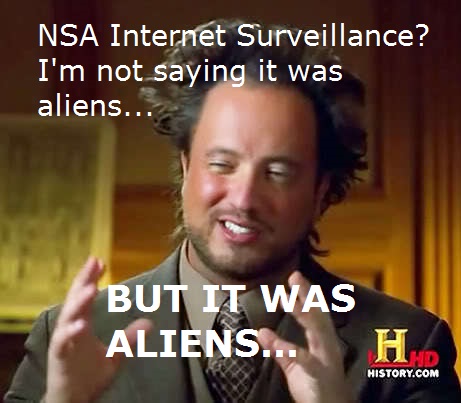 It is a different place for sure. It's egg head central. I did two tours there while on active duty, three if i include the 6 month school i attended there.

I don't know how people could work there day after day. I hated it my first tour as a junior guy. Second tour was better, TDY a lot away from Fort Meade.

A lot of cool stuff there and also a lot of weird, socially inept people.

Fun, interesting times for the most part though.


I actually laughed a bit at your "egghead central". That's exactly what my grandfather said about them, too, along with remarks about being socially inept. I can now comfortably say that the reason why my shoulder wasn't tapped (gifted) was probably because I was too cool. Considering who they look at for NSA, it's not that all surprising that they'd look for those who were the most egghead of the eggheads. All of my G&T friends did not go to the NSA or DARPA for that matter so not everybody in G&T makes the cut but I do recall a couple friends being shoulder tapped in high school.

These two articles actually give some more insight into what it is that they do. Super nerds from what it looks like though it also would appear that they need to work on their typing:
www.latimes.com...
openchannel.nbcnews.com...

Did you know that the following text contains the same IP Client address, different date stamps and the same insulting message to the elite ?

All it took was 1 website, html, _javascript and php.

Now imagine a timer setup with a hourly interval that sends out the same initial message that is hexed and encrypted all the time.

The NSA are asking for headaches.