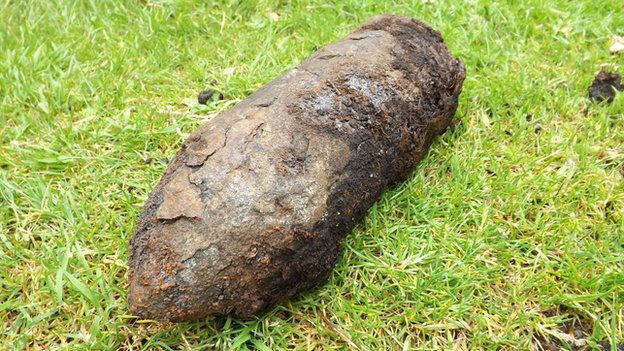 A woman who dug up a suspected bomb in her garden washed it in her sink before police were called and a controlled explosion was carried out.

Carole Longhorn struck the metal object with her spade while gardening at her home in Melton Constable, Norfolk.

Her husband, Clive, said: "I heard a rattle in the kitchen and saw she was washing it in the blooming sink."

The object, which is about 25cm long (10in) and thought to have been a World War II projectile, was blown up.

She sounds like a potential candidate for the Darwin awards.

I mean you just wouldn't would you? It does not take too much grey matter to recognise the object as a bomb or at least possibly a bomb, and considering how many were dropped over Norfolk it was quite likely that it was a bomb.

Apparently the bomb was live.

The object was driven to a nearby quarry and detonated.

"It was brilliant," Mr Longhorn said. "The ground shook - you could feel the shockwaves come across and bump into you.

Mm. Would he be saying that if it had happened in his house?

Maybe she thought it was a time capsule. What is it, a delayed message from the Germans?