posted on Jun, 6 2013 @ 11:27 PM
link
Tonight I was going through some old stuff on my computer with a friend of mine, we got to a picture I made with the pyramid on the dollar bill mirrored so it looked like an hourglass, and my friend immediately pointed out the Greek Symbol Sigma. 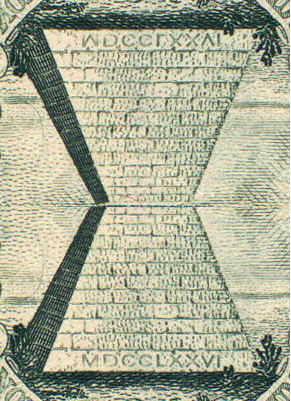 At first I thought it was a coincidence but the tufts of grass really diminished any doubts in my mind. Upon further observation it appears that Delta and Lambda are present as well.

I'm not too keen on Greek Symbols or what they mean so I admit I used wikipedia to find out, some of the meanings behind the symbols sure do bring new meaning to the phrase "Money makes the world go round"

Upper case Σ is used as a symbol for:

the summation operator
a class of baryons in particle physics
macroscopic cross sections in nuclear and particle physics
self-energy in condensed matter physics
the balance of the invoice classes and the overall amount of the debts and demands in economics
the set of symbols that form an alphabet in linguistics and computer science
the covariance matrix of a set of random variables in probability theory and statistics, sometimes in the form to distinguish it from the summation operator.

The upper-case letter Δ can be used to denote

Change of any changeable quantity, in mathematics and the sciences (More specifically, the difference operator[citation needed]); for example, in
, the average change of y per unit x, i.e. the change of y over the change of x
The Laplace operator:

The discriminant of a polynomial equation, especially the quadratic equation:

A macroscopic change in the value of a variable in mathematics or science
Uncertainty in a physical variable as seen in for instance the uncertainty principle
An interval of possible values for a given quantity for instance across a sample[citation needed]
Any of the delta particles in particle physics
The determinant of the matrix of coefficients of a set of linear equations (see Cramer's Rule)
That an associated locant number represents the location of a covalent bond in an organic compound, the position of which is variant between isomeric forms
In chemistry, it is often used to represent the addition of heat in a reaction.
In legal shorthand, it represents a defendant
In the financial markets, it is one of the Greeks that describes the rate of change of an option price for a given change in the underlying benchmark
It is the symbol of the Greek inventor and architect Daedalus
Signifies a major seventh chord in jazz music notation.
In genetics, it can stand for a gene deletion, e.g. the CCR5-Δ32 a deletion of the CCR5 at the 32nd base pair segment
The American Dental Association cites it (together with omicron for "odont") as the symbol of dentistry.[1]

Lambda can mean the empty set in mathematics, though other symbols are more commonly used, such as .
The lambda particle is a type of subatomic particle in subatomic particle physics.
Lambda is the set of logical axioms in the axiomatic method of logical deduction in first-order logic.
Lambda was used as a shield pattern by the Spartan Army. This stood for Lakedaimon, the name of the region of Sparta.
Lambda is the von Mangoldt function in mathematical number theory.
In statistics, Wilks's lambda is used in multivariate analysis of variance (MANOVA analysis) to compare group means on a combination of dependent variables.
In the spectral decomposition of matrices, lambda indicates the diagonal matrix of the eigenvalues of the matrix (mathematics).
In computer science, lambda is the time window over which a process is observed for determining the working memory set for a digital computer's virtual memory management.
In astrophysics, lambda represents the likelihood that a small body will encounter a planet or a dwarf planet leading to a deflection of a significant magnitude. An object with a large value of lambda is expected to have cleared its neighborhood, satisfying the current definition of a planet.
In crystal optics, lambda is used to represent the period of a lattice.
In NATO military operations, a chevron (a capital lambda symbol) is painted on the vehicles of this military alliance for identification.
In electrochemistry, lambda denotes the "equivalent conductance" of an electrolyte solution.
In cosmology, lambda is the symbol for the cosmological constant.
In optics, lambda denotes the grating pitch of a Bragg reflector.
In handwritten Russian, this letter represents Л in both uppercase and lowercase formats.

The especially interesting ones were emboldened, this is quite intriguing because the dollar bill also says "In God We Trust" and we literally worship these pieces of paper. We have three very distinct symbols right here and the meanings behind each one. What's even more interesting is that there is nothing that I could find on the internet about this.

As for the rest you could be correct. I do think it was built to fail.

posted on Jun, 6 2013 @ 11:52 PM
link
Here's another interesting trick if you are into to mirroring. Take the two ends of the dollar and fold them together so that the two circles become one. Then you will see a serpent digging through the earth.

Also of you look close at the all seeing eye it tends to hint that the solar systems planets are all bound for the sun at one point or another.

posted on Jun, 6 2013 @ 11:55 PM
link
Pretty cool, but... your top pyramid is reversed. Put two actual 1 dollar bills together like you did, and you get a 7 and an L with the shadowed sides. Now, align them to make a Z. What are the next three letters? ONE Zone? What zone? Dunno. Dollars are weird.


have you ever looked at a twenty dollar bill on weed man? There's a guy in the bushes! Does he have a gun? I don't know man!