Picture of the day! 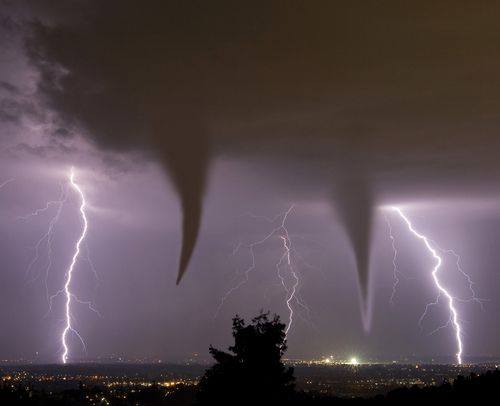 Scary but fascinating at the same time...


You're not just whistling Dixie. Very scary and powerful image. I hope most were taking shelter by the time this was taken.

The edge of that cloud makes it almost seem like those twisters should not be there at all.
edit on 3-6-2013 by aboutface because: (no reason given)


Just wondering if you have the source for this picture. Seen it on a Tornado Chaser's Website a while back and I believe they were calling it a fake.


That's just a gorgeous shot! Nature's furry can be such a beautiful thing. (Until it rips into your neighborhood)


There is just enough Christ in me
To make me feel almost guilty
Is that why God made us bleed
To make us see we're Humans Being?

Although, I believe it's probably fake. It looks like the twisters have been added in. The cloud
formation doesn't seem to support the tornado's structure....just sayin'


It has been photoshopped. Tornado clouds are much lower to the ground.

who'd want that coming at them?

Just look at the contour lighting on the funnels, it is disproportionate on both of them, and the coloring of the clouds is different in several places. Not to mention that the tornado was a wedge tornado, which those clearly are not. There's no way....

I would challenge someone to provide the source for the picture, or any other pictures that were taken from the same vantage point because the odds of catching that would make it worth millions to the person who shot it, and would be on the cover of every news source in the country before it would end up on the web.

~Namaste
edit on 3-6-2013 by SonOfTheLawOfOne because: (no reason given)


Yea, I posted it with my morning coffee..

now that I have looked more closely at it..

i have to agree...still a cool pic though..