Intelligent first cause: WHY IT IS IMPOSSIBLE

posted on May, 28 2013 @ 06:12 PM
link
What I am about to describe flies in the face of both, the religious belief that a god created the universe, and the scientific belief that the Big Bang started from nothing. I must point out that I'm no genius so I can only rely on common sense and my own opinion. Feel free to attack the opinion, not the person giving the opinion.

Now, imagine that I popped into a realm of absolute nothing. When I try to move my hand I am going to have a serious problem. I can't push NOTHING out of the way. NOTHING has no qualities. Also, if I could move my hand, NOTHING cannot fill in the space that my hand previously occupied. If something DID fill in that space, then that something is SOMETHING and not NOTHING.

Wow, you are someone who does a heck of a lot of over thinking about absolutely nothing

posted on May, 28 2013 @ 06:29 PM
link
So where does ATS go when you turn off the computer? Nothing is an idea, just like everything else, and really purely subjective. I used to believe in the infinite universe concept, but these days I'm leaning more towards this all being a simulation. The "big bang" was the run button being hit. What exists before a computer program is written and then entered?


Therefore, everything that is is a manifestation of the infinite eternal Godhead who never was not, and who embodies the whole of creation but in an intelligent manner, so it's not a capricious addition from nothing, but an intelligent subtraction from the absolute potential that is everything already always.

posted on May, 28 2013 @ 06:51 PM
link
Could a "nothing realm" exist in the first place? By calling it a realm you've given it parameters, and that makes it something. Like someone said above, nothing is an idea, by definition it cant be a place.
Just a thought, have a good one.

posted on May, 28 2013 @ 06:55 PM
link
What you are describing, at least in my eye, is non-existence. Non-existence simply does not exist. Everything that exists, exists (be it empty space, 'particles', whatever), and there cannot be an end to that which exists. You can't 'cross over' into non-existence because it does not exist. Therefore, it can be concluded that either the universe is cyclical, or it is infinite. It is most likely infinite.

When (and I understand that that is an inaccurate word, but bear with me here) the Absolute created the relative, it literally did so from absolute scratch. The universe isn't 'based' on anything, it is baseless. Every aspect of the universe, therefore, must have infinite complexity. Every property in the universe must have more detailed properties defining that one, even more detailed properties defining those, and so on and so forth, ad infinitum. At the end of this infinitely long chain of complex and even more complex properties, is the pure consciousness of nothingness. The universe, therefore, is literally made of nothing. That is why it is said, that "reality is an illusion".
edit on 28-5-2013 by HarryTZ because: (no reason given)

Originally posted by jiggerj
and the scientific belief that the Big Bang started from nothing.

Straw man.
The energy / matter equivalence isnt allowed for here. Your "nothing" makes no reference to the starting energy.


Originally posted by jiggerj
Now, imagine that I popped into a realm

A "realm" implies space.
And no big Bang proponent would ever argue that space existed at that time. Your analogy doesnt work.

Originally posted by KBadger
What exists before a computer program is written and then entered?

Before a computer program is written, then entered, it exists in potentials. It is composed of the energy/effort that is used to write the code. Whether it is electrical energy or biological energy, the program is made of this.

The different steps that must be performed to create the program are the ingredients of the program itself. While the actions and elements themselves resemble nothing like a program by themselves, when they are combined a transformation occurs.

Adding different elements can cause a reaction that produces something entirely unrecognizable when it's compared to the individual actions/elements used to create it.

Everything is created through a series of processes that combine to form all the different aspects of reality.

Build a giant sand castle and you can easily identify what the collective grains of sand are doing. Tear the castle down and you have no trace it ever existed, even though every part of it stilll exists. It would be a near impossibility to reconstruct the sand castle using only the original grains of sand used to build it, but it is possible, because all those grains of sand exist, as does the physical energy and intellect required for assembly.

Same principle goes for a sheet of paper... burn a sheet of paper and it turns to ash. Rebuilding the paper would be nearly impossible as well, but it can be done, because all elements/ingredients still exist.

A computer program exists before it's construction much like a plank of wood flooring does...

The tree sprouts and becomes mature. It can not become a plank of flooring on it's own, it requires the combination of other elements to create the plank. So the plank of flooring consists of the tree and all the energy used to mill the board, such as physical muscle, fuel, friction from a saw blade, etc.

I'm not saying the foundation of a computer program grows from the Earth, just that all elements needed to compose the program exist in physical reality, and require only proper assembly to bring it into existence as a program...


I have an idea that our material reality probably originally existed in a different form and only became our current reality when the proper ingredients were put in place.

However, when the 2 dimension came in contact, the 'Big Bang' happened. Matter existed before this, but, because there was no time, the matter could not be detected - it was undetectable, since there was no time and all measurment and observation requires the passing of time.

The time dimension was also unrecognizable, because there was no matter present to be measured.

The combination of the two dimensions is what began reality's evolution, leading to the material world we know today.

Probably incorrect, but it is just an idea...


You've figured out a basic truth.

NOTHING, as in Non-Existence... does not exist. Only existence exists.

When most people say "nothing" what they mean to say is empty space. Empty space is still something.

It is this space that goes on forever and that the universe is expanding into.


Zero is an idea.

Zero can be the absence of all things

Put a 1 in front, and zeros can also represent a trillion things.

Originally posted by dusty1
reply to post by jiggerj

I totally agree with this except with the notion that being outside of space and time involves by necessity being outside the universe, because from the POV of a single photon of light, whose emission or absorption forms the basis for every chemical reaction in the universe, to the photon, travelling @ the speed of light, the whole universe is in instantaneous contact in an acausal domain or in a timeless, spaceless domain, and in this way "God" (we can't truly fathom or conceive God) could hide out in a very tricky, but single, photon of light, and get to be let us say both very very big and very very small, both, at the same time.

Because as Pops has pointed out in the OP, there is no such thing as "outside the universe" and nothing has no meaning and no frame of reference let alone that by which the something we experience exists, that doesn't make any sense and I like his argument that you simply cannot have something come out of nothing, and that nothing can't "make way" for something, that was good.


aren't you forgetting something?
you are something
and with you suddenly popping into a realm of nothing
there'd be nothing holding back the pressure of all the gases within you
or containing all the energy/atoms that comprises your physical self
resulting in a BIG BANG
the resultant explosion might create a universe in which billions of years later
sentient life might emerge and speculate concerning the causes of the BIG BANG
and what might have preceded it.


that the BIG BANG was preceded by the HUGE FART

You're thinking philosophically. Be careful; they've burnt men at the stake for less. 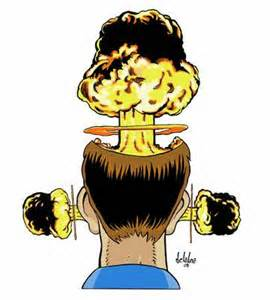 It is not a paradox. Everything is nothing.

How do you want me to respond to this?

This is literally a proven scientific fact. All matter descends into nothingness. It's not just empty space I'm talking about either. It is, in fact, the absence of both space AND time. Nonlocal nothingness.
edit on 29-5-2013 by HarryTZ because: (no reason given)

No thing can come from nothing.


The universe had a beginning, but it had to come from something, which had to have always existed.


What Has Always Existed could not have been created.


KBadger made the observation that nothing is an idea.

No universe, is an idea.


I believe that the universe,


But we had to have one universe to understand the idea of no universes.


Maybe zero, is something.

Maybe 0 had an idea.

Yeah, An intelligence that has always existed, outside of space and time.


How does anything operate where one minute does not move into the next minute? How can there be a progression of thought without time? It takes 2 seconds to think "I will create the universe." Without time, that thought could not have occurred.