Ode to Cut scenes Intros and women in video games!

posted on May, 27 2013 @ 09:56 AM
link
I absolutely LOVE some of the video games that have come out over the years, especially those who take women and put them into the games as main characters. This thread is my way to express and show you some of the most awesome artwork and cut scenes I can find for games I love. It will be full of video content, some of which is violent, just to forewarn you.

I open this thread with something someone made as a tribute to Final Fantasy and Left for Dead, I do believe it is. I found this this morning, and had to watch it twice because it blew me away. It is very long, but if you are a final fantasy fan, you will not regret it.

I got this idea from another thread on villains, and after I added who my favorite villain is, I started to think about all of the things I have played and watched over the years..and then I found this video:

Being a fan of women in games, and Final Fantasy, I was blown away. Enjoy!

posted on May, 27 2013 @ 10:39 AM
link
This game was also one of my favorites.
The intro music I love, and it brought back memories of childhood friends.
Chrono Cross

I still get shivers with the intro
I found 2 parts to cut scenes from the game!

She was strong, witty, and had a sexy accent. Playing through the game was a blast, I spent many hours climbing cliffs, shooting lots of different monster and just admiring a game full of puzzles unlike anything that had been seen at the time. She spawned many video games, but the first one was my favorite! It was the first game that I actually screamed like a little b*tch at one point, close to the end when a guy stepped out from behind a pillar and shot at me and scared me!

Here is the intro:


One of my favorite monsters in the game was the T-Rex.The first time I saw it, I was amazed. Looking at it now, graphics have improved so much, but it was such a fun game!

There are many Laura Croft tomb raider games now, but like I said, I loved the first one the best. This thread would not be complete without Laura

posted on May, 27 2013 @ 12:00 PM
link
Ok, this to me is the best RPG to ever be created! I am a huge Final Fantasy fan!And pride myself on playing every single American release of Final Fantasy, 1 through 13. But out of all of them, Final Fantasy 7 was my favorite. Here is the intro for the 7 remake for the PS3 that never was completed as far as I know.
(it could of been, but I don't think it was, they teased us with it, and then somehow it got put on a shelf somewhere which is a big bummer)

I spent hours and hours and hours leveling up and solving every single part of the game. It spawned my favorite villain Sephiroth, and was the first game that caused me to actually fall in love with a character named Aeris who Sephiroth kills.

Here is the complete death scene

It still saddens me to see it, that is how powerful the Final Fantasy games were. Every game they killed off someone who you would become attached to, and in doing so, created an awesome experience along with a lot of other things that made all of these games so good.

One of the women in the game, a summons who I have followed through-out the series was Shiva. She was always sexy
Here is the evolution of Shiva through the games.....

Oh, and feel free to add your own if you have anything!

There are probably tons of female characters in video games, after all its one of there selling points. But some really do stand out and are more then just cheep copy and paste jobs. The game chrono cross game which you posted and its characters are one, kid and harley charters are still memorable to this day, and I bought the game back when it came out, having just checked it out, it came out back in 2000. And still 13 years latter seeing the intro to the game with that music going still gives me goose bumps.

I played many final fantasy games, and the most memorable female character in them has got to be Shiva, shes not even a playable charter but still I am pretty sure given a few games she has been in every final fantasy game so far to date. Second would have to be Tifa, just because she kicks ass, third would be Fran from FF12, and fourth Aries.

The only other female character that comes to mind right this moment is Bayonetta, the only word I can use to describe this game and character is Ridonkulous. You play as a glasses wearing sexy librarian looking witch who's outfit is made out of her magical hair, she can also summon creatures via opening portals using her hair. Oh and she has guns, lots of guns, she even has guns attached to her high heals, you can even do handstands and shoot with your feet. Awesome I know! And the more combos you do the more revealing her outfit gets. There are cooler and more memorable female charters then Bayonetta out there, but right now she was the only female character that came to mind.


I never played that game, I remember the trailer for it though!
You made me thirst for more! Good job!
I went and found the beginning cut scene.

Almost makes me want to go out and buy it!

That is one hell of a woman in a video game!

The main character Rynn, was a Laura Croft look-a-like,
at least that is what I thought at first.

This game combined dragon riding, air battles or if you wanted, on foot travel through a HUGE game world full of monster,caves, dungeons, and so many puzzles it would drive you mad!
It combined both a sexy woman, hack and slash with great weapons,
and an awesome dragon named Arok,
the two together were quite the combination. 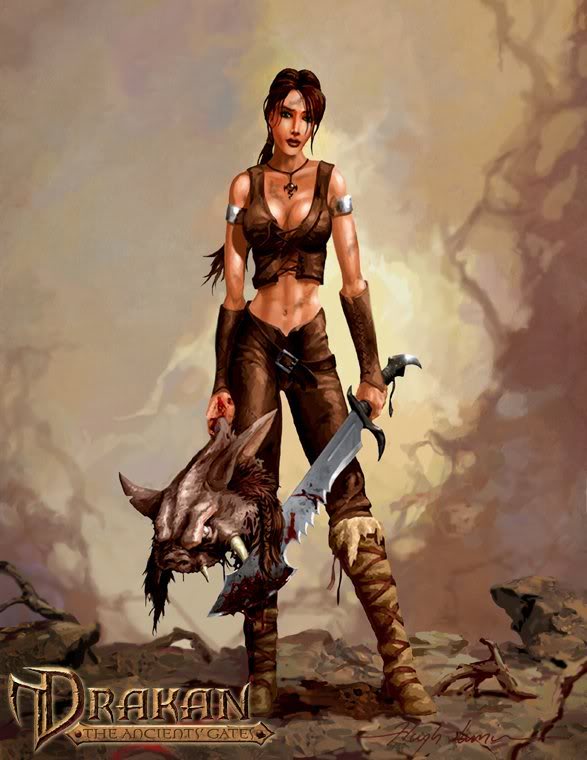 I tried to find some short videos of the game, but it seems most are 10 minutes long, and cover her on foot. I did find a music video that shows a lot of the game, to give you an idea of both Rynn and Arok together.


(the music is ok, but the game play is really what I want you to see)

It ranks up there as one of my all time favorites. Great graphics, awesome game play, a cool dragon, and sexy main character who was definitely not just for looks. She could do everything Laura Croft could do, plus spells and some serious swordplay.

It is the 2nd game in the series, I do have the first game,
Drakan Order of the Flame 10th anniversary edition on my computer, but I have not played it yet.
Gotta do that sometime!