Facebook censored a picture of 2 children holding up signs at one of the global MAM's. Facebook dubbed it abusive.......?

In one of the most devastating acts of destruction of its own credibility, Facebook engaged in yet more censorship of Free Speech with the suspending of an account that posted a photo of children rallying against Monsanto during today's global March Against Monsanto.

Does this picture look abusive to you... 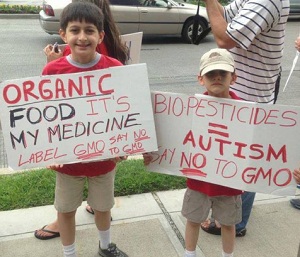 In no way does this picture look abusive or offensive..

At this point, Andrea can only re-post other people's content but is disallowed from posting her own content. Why? Because children with signs are obviously very, very dangerous to the establishment.

There was also another similar incident that happened to a woman who had reposted a friend's photo from the Monsanto March and her account was also suspended..

Grrr.. Freedom of Speech is slowly being taken away from us through ridiculous censorship. Facebook censors pictures of women breastfeeding. Facebook really does not like female nipples on display and even the impressions of nipples under clothing are unacceptable. Yet male nipples no problem. They feel pictures of crushed heads or mutilated limbs are fine.. And seemingly now they are not liking pictures of the rallys against Monsanto...
It makes me so cross...


Facebook is NOT the government and can do what it likes. I think it's creepy when people don't get this. Don't like it? Don't use it.

posted on May, 27 2013 @ 06:09 AM
link
To be honest - I do find it tasteless when people use children as part of their marketing, regardless of what their selling.

The problem is that children have no prerequisites of knowing if what their selling is true or not - and there are in fact people who will buy things, without fully understanding them, just because you put a child's face on it.
And especially in regards to stuff like this - I prefer to keep it scientific, and leave the emotional propaganda at home.

Buuuut - I don't think it's Facebook's job to censor this stuff either. They are not the authority on this subject. But they do have the right to remove the content. Legally anyway.
edit on 06/06/12 by Mads1987 because: (no reason given)

Originally posted by ignorant_ape
reply to post by fluff007


Exactly, and natural news is far from reliable, as well as biased.

posted on May, 27 2013 @ 07:45 AM
link
This was mentioned yesterday in the "march against monsanto" thread, and my answer is still the same now as then.


...coming from Naturalnews is immediately suspect, and probably a lie.

Perhaps Naturalnews and its fans could explain why, if the images were so offensive as to cause "censorship", that they are still visible to anyone who wants to take a look?

However, people should consider that an amendment to the Farm bill, which would ALLOW states to label foods as containing GMO, was shot down in the Senate... so, states are not permitted to label foods that contain GMO. This should be very worrying to anyone who eats. Half of Democrats and the vast majority of Republicans in the Senate voted AGAINST state's rights to label the food their people eat.

I don't get involved in the Monsanto threads here. But I would advise against just shoving this under the rug. I don't care if Facebook deleted a picture or not. What I care about is truth in labeling. This sets a precedent for feeding us stuff that doesn't require accurate labeling. Just give that some thought.

Related thread:
Senators who Voted Against GMO Labeling
edit on 5/27/2013 by Benevolent Heretic because: (no reason given)

No it is very real. Was going to post about Monsanto targeting social networks but never got round to it.. They bribe, they corrupt, the lie, they sell nutrient poor foods, they damage the environment, and detriment our bodies. What on earth makes you think they are not going to want to target social media. This is an information war and they know it..