In recent years, many traditional holiday greetings have been squelched by opposing viewpoints just because somebody thinks they will get insulted or something.

What has the world come to when it becomes "necessary" to pass laws just to be able to say Merry Christmas or Happy Hanukkah and not be oppressed when somebody wants a display of religious content ??

Many people always wondered why groups and bureaucrats could somehow override Federal Holidays by suppressing the content and even what other people are "allowed" to say ?

State lawmakers in Texas have passed legislation that permits public schools to display nativity scenes, menorahs, or Christmas trees, and allows students and school district staff to use greetings such as, “Merry Christmas,” “Happy Hanukkah,” and “Happy Holidays.”

According to Fox News in Austin, the legislation (HB 308), introduced by Rep. Dwayne Bohac (R-Houston) and dubbed “The Merry Christmas Bill,” received overwhelming approval in the state house, by a margin of 145-2, and was passed unanimously in the state senate, 29-0. The bill will now be sent to Gov. Rick Perry (R) for his signature.

posted on May, 26 2013 @ 06:16 AM
link
It's not necessary. This legislation is just absurd ideological grandstanding. It's like passing a law which says nine-armed aliens from Alpha Centauri aren't allowed to use local public parks and then telling everyone you've successfully addressed a very real problem.

posted on May, 26 2013 @ 06:17 AM
link
So long as they are fair to everyone i see no issue with this,
its obviously oppressive to force folks to not say what they
wish more so than to simply let them choose their own
greeting for whatever version of the holiday they want to
celebrate, as to the decorations the same applies, so
long as one doesn't get favor over the others than its
not a bad idea.

Political correctness is for the birds, they can just keep
that BS away from me, id rather have political honesty
any day.

Originally posted by Benevolent Heretic
reply to post by xuenchen


What I'd like to know is when it became illegal to say "Merry Christmas" anywhere in the US or why it's such a big deal to say "Happy Holidays" when meaning to wish someone a nice holiday season but don't know their religious beliefs or if they even have them. How dare anyone have manners?

"Happy Hanukkah"? When has it been a problem to say that?

As far as I can tell, its Christmas thats been under "attack".

Around holiday time last year, Gapso proclaimed public display of the Christian symbol as provocative and banned the trees from public squares. "Nazareth Illit is a Jewish city and it will not happen -- not this year and not next year, so long as I am a mayor," he told the AFP.


New war on Christmas? Not so new after all

So let’s go back to 1906, more than a decade before the ACLU was founded, when Jewish families in New York City staged a one-day boycott of public schools in the city. The reason? You guessed it: Christmas celebrations in the schools.

In the late 1940s, Jewish complaints about Christmas rituals in a suburban Boston school prompted threats of a new boycott — against their stores.

In the 1960s, when the Supreme Court barred school prayer, some districts actually increased the “religious content” of their Christmas celebrations “to compensate for what has been banned explicitly in the daily school routine,” as one Jewish leader worried.


Lest anyone think that Jews are being singled out:

And Jews weren’t the only dissenters. Take the current dispute in Waterbury, where Jehovah’s Witnesses have objected to holiday decorations.


I would imagine that some other groups have also objected, Moslems, Hindus etc but nowhere have I seen that "Happy Hanukkah" is an issue...


LikeSankari said, it's ideological grandstanding. It's just an attempt to further the illusion that Christianity is under attack and victims of some progressive movement to get rid of them.

When a group, despite it's huge numbers and incredible political power, finds that it cannot control EVERYTHING (like "owning" the word marriage and making a woman's body property of the government), their best move is to act like victims in hopes of gaining more support for their ideals.


Yeah, I understand that false persecution BS... what I'm curious is how you can pass a bill that legalizes something that was never illegal.

posted on May, 26 2013 @ 07:53 AM
link
As a resident of the State of Texas, I am embarrassed by the passing of this bill.
Unfortunately, the only thing our state senate & representatives can agree on in large majorities - are senseless "feel good" legislation of no redeeming content or social value.

posted on May, 26 2013 @ 08:13 AM
link
This is what you call wasting money to pander to idiots. A law making legal to do something that is not against the law. It is amazing how stupid people are. I say Happy Holidays all the time not because of some law or PC but, because it covers all the holidays that time of year. Although it will be ineresting to if some Satan Worshipers take advantage of this and want to put up pentagrams and say Hail Satan to a local kindergarden class. That would be pretty damn funny


Well I fail to see any war on Christmas. And it is beyond really sad that your little story on the Christmas Tree ban isn't even an American city. First and foremost schools should not be celebrating holidays at all, they have one job and one job only to educate. Indoctrinating peoples children to their personal mystical mumbo jumbo is not their job.

During the signing of Texas' "Merry Christmas Bill" on Thursday, Gov. Rick Perry (R) made a rather shocking claim.

"Religious freedom does not mean freedom from religion," Perry declared at the State Capitol building in Austin before signing HB 308, which allows public schools to display scenes and symbols of "traditional winter holidays."

"People of faith too often feel they can't express their faith publicly. And if they dare display it, they find themselves under attack from individuals and organizations that have nothing to do with them or their communities for that matter," Perry continued, nodding toward a group of Kountze High School cheerleaders, who had come to show support after winning a landmark case where a state district judge allowed them to display Bible verses on banners during football games.www.huffingtonpost.com... 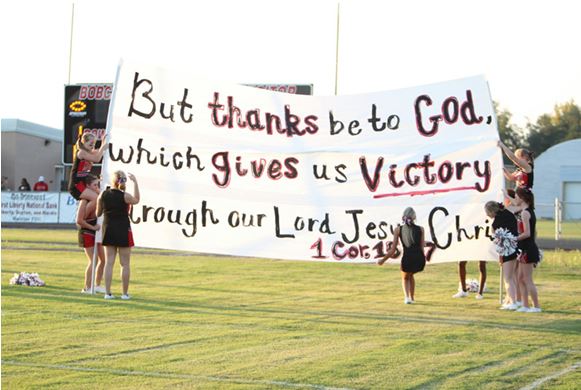 Under a new school board policy, and in briefs to the court, Kountze ISD made clear that the banners are under district control and are "government speech." The district also expressed that it would like to see the religious banners continue to be displayed.

Both state Attorney General Greg Abbott and Gov. Rick Perry had inappropriately weighed in on the case. Abbott even called FFRF "menacing."

Yes, I agree with this:

"Proselytizing messages by cheerleaders representing the school, wearing the school uniform, at the official start of a public school football game, inevitably carry the appearance of school endorsement and favoritism, turning Christians into insiders and non-Christians and nonbelievers into outsiders.

posted on Jun, 15 2013 @ 09:42 AM
link
I'm not the biggest supporter of holidays because consumerism as caused me to loss interest. But I think we shouldn't be ashamed to celebrate holidays and events because offend people.


Shh...they'll remove it and then we'll all have to work or go to school that day!

Shh...they'll remove it and then we'll all have to work or go to school that day!


Plenty of people already work on Christmas and Thanksgiving and New Years. Head out on any of those days and the restaurants and shops are all staffed. Seems like the only people who still get those days off are government employees.

Regarding the topic I guess it's good Texas has nothing more serious going on and the money to waste on such a luxury as the "Merry Christmas" bill.


Originally posted by Annee
Why is Christmas a federal holiday in the first place?

I am not offended. We are a secular government. I support separation of church and state 100%.

How is Labor Day a specific god belief?

And before anyone goes loony about me attacking religion -- separation of church and state is specific to government. It has nothing to do with personal belief or religious freedom.

I see nothing wrong with this bill. I wish NY would do this. People are so scared to say what they long in their hearts to. Christmas is a time of joy and Atheists are making it about condemnation. It should be about peace, kindness and goodwill to others and instead people are being forced to hold back from celebrating, whether in simply voicing their thoughts or decorating the outside of their homes, absurd. I don't see this as a waste at all.

Happy Kwanza
and Chanukah are lip service on paper only.
It's Texas for Christs sake...

In real life, my wife who works at the Capital,
had to deal with a library in Leander Tx who was made to
take down the Menorah but keep up the Xmas tree after
complaints.