posted on May, 25 2013 @ 11:31 AM
link
I often see members saying "there are no photos of UFOs" and claims that astronauts never saw any UFOs in space. There are a few photos in this video, if astronauts didn't take them, who did ?

I know Bob Dean has been given a hard time here by some members but this thread isn't about what you think of him, I would like to know what you think about the UFO photos. They look real enough to me but I'm not an expert on photography so can you debunk any or all of them ?

I just don't want to be thinking these photos are real if they're not so thanks for your help with this.

For those who don't want to watch it all he starts to show his pictures at 22 minutes into the video or at 26:30 for UFOs but what he has to say between those times is important in my opinion.

He comes back on at the end and tells an interesting story, Aliens think we stink.
Bob Dean 2009. YouTube

you will come to see the 'new-age' ideology they're all trying to 'tack onto' everything they release (think Zechariah Sitchin) ..you will notice how Bod Dean made a special effort to reconcile christianity with the whole new-age movement when he recounts his 'past life regressions' (find out who his pretty wife actually is)
you will notice Jordan Maxwell was there to 'introduce' his good friend Bob Dean.

..all the info has to be 'cleared' first then disseminated through these UFO conventions, etc.. spend enough time in the scene and you'll see this for yourself.. Greer, etc, they're all 'G-men', there is no 'disclosure' project, do you really think humanity was meant to pay $9.95 for 'the truth' ? (ie: the recent 'sirius' movie)

Originally posted by LEL01
I would like to know what you think about the UFO photos. They look real enough to me but I'm not an expert on photography so can you debunk any or all of them ?


Let me get it straight here.

There are at least 7 photos in this documentary....

So, if I understand you correctly, you ask to an "expert on photography to debunk any or all of them"?
You are, of course, aware that a serious and in-depth photo expertise is very consuming-time and that it takes days and days of work to *maybe* begin to have an idea of what it could be?

For example, the 1950 McMinnville case study that we have done with my friend Louange took us almost one year of work, before publishing it last March... And it is not finished yet.

I guess that you're also aware that NO serious and conclusive photo or video study can be done without the original document, or at least the best possible one. (best resolution, first hand, etc...)

But maybe you have these original documents that Mr Dean showed in this documentary in hands? If so, I'll maybe begin to be interested.... Otherwise ...
edit on 25-5-2013 by elevenaugust because: (no reason given)


Thank you for that link, they said it was the Saturn V rocket. I looked at images for the rocket and I did find a part that could be it.


No, you didn't understand me correctly, I said I'm not an expert on photography. I didn't say members responding had to be experts and I wouldn't expect anyone to spend a year on trying to debunk the photos. One may have been debunked already and I don't know if that member is an expert or not. An opinion is all most people can give but nobody is forced to respond.

Originally posted by roughycannon
Found this about the second picture:

That is UFOish and not a rocket but thanks for nothing I suppose from the debunkers
who are wrong. Note the Tesla bulbs in a ring along the ship sides or rim since its oval.
So not bunk but real Tesla ship.


Thank you but I wonder if you're confusing me with someone else as this is only my 3rd thread. I'm not very confident about posting so I read a lot more than I post, I only posted this thread because I don't want to be thinking I've seen pictures of UFOs if I haven't.

The third picture is apparently the third stage of Saturn V. 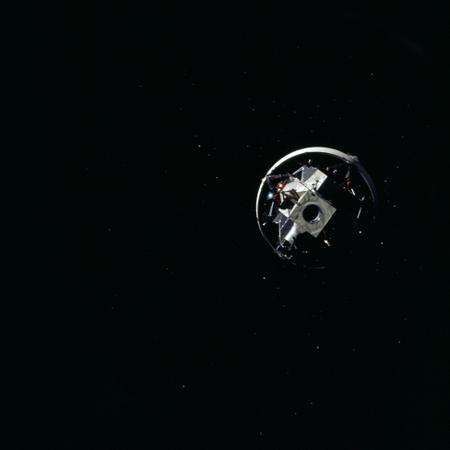 source of the picture

The nasa site has a picture sequence that is interesting


Thank you, I would have posted the pictures but I'm not that clever. Roughycannon posted a link to where the third picture was debunked. I tried to post a link to images of the Saturn V rocket but I couldn't get the link to work, I did find a part of the rocket that could be that UFO then that would make it an IFO if that is what's in the photo.


The rocket is not very luminous.
At any time normal objects are not luminous and can not be mistaken for UFOs which are
luminous or we would not be seeing them.

I can't say the rest of the UFOs are what Dean suggests.
Our future in not in the stars and a whole lot of cornball ball reasons for lights that are
easily explained by Tesla ships in orbit if they ever were taken from a space window.

I believe he also presented the pictures of alleged spacecraft hiding in Saturns rings in Barcelona.
In my opinion NASA explained what we probably see in those pictures pretty conclusive.
I know they're not highly regarded but it's worth mentioning just in case someone cares.
Nasa on extended objects


He shows one or two pictures of a UFO outside the rings of Saturn and talks about it travelling all around the rings and moons of Saturn. He lost me a bit when he talked about what NASA calls the extended objects. I don't trust NASA but they are the people in the know, it's something I will keep in mind while thinking about those pictures.
Thanks for the link.

Yes.
One must wonder why Bobby didn't use the high resolution images which are available.

One must also wonder why he did not provide the correct image ID numbers. The ID given for the image (AS12-51-8553) indicates that the frame was from film magazine #51. Magazine 51 was color film and the frames on it were numbered from 7460 to 7588. Bobby would have us believe that there were more than a thousand frames on that magazine of 70mm Hasselblad film. This is the actual source of the image that Bobby used: 
One Oval Tesla ship was sighted by Lonnie Zamora landing, on land with two
passengers and moving up 100 feet before cruising the desert once more
and Ovals and Rex Heflin Disk Tesla ships were seen by Walton at a secret base.
At least Zamora was allowed to depict the ship.
This was given a story on Unsolved Mysteries.
The Hudson Valley sightings had a Wing Tesla ship as the same show had
one driver on the roadway behind it and stopped to see it in low level hover
with more witnesses.
The Wing Tesla ship also flu low level over a home as people watched.
Yeah and the Triangle Tesla ship was given the same treatment.

Perhaps the best unknown ships ever witnessed.
All the rest of the glowing ships or found in photos that was not there before:
all Tesla ships.

Dean has no Tesla ships except for the oval perhaps.
ED: And yes the Tesla ships can glow as the name implies light is involved.
Ed+ Glowing Tesla ships you do not go close to and so far has not happened as
that glow happens in hover due to buildup of air reactions. Walton got too close
to a landing ship and got knocked unconscious somehow.

posted on May, 25 2013 @ 10:57 PM
link
hey phage, could you please upload the hi resolution photos of the bob dean photos that he showed, id like to see them matched up to the nasa site, thanks