posted on May, 25 2013 @ 08:24 AM
link
This is a weird story that has been floating around the net for a while now. In 1926 Itigelov a Buddhist monk was advised to leave Russia since the red teaching where coming. Itigelov stayed and started mediating. He gave strict instructions on how he was to be buried..

Ititgelov left a testament where he asked to bury him as he was, sitting in lotus pose in the cedar box on traditional cemetery. It was done. There was also a statement, where he asked other monks to exhume him after several years

For political reasons this did not happen and the body was only fully exhumed in 2002.

The official statement was issued about the body – very well preserved, without any signs of decay, whole muscles and inner tissue, soft joints and skin. The interesting thing is that the body was never embalmed or mummified

To this day the body is kept in the open air and shows no sign of decay or perish. It is a mystery to science.. 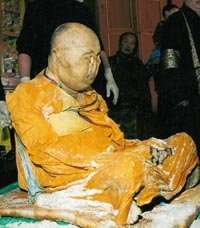 Interesting post nonetheless, so S&F for the content. I do however see signs of decay, such as the nose, but it's hard to explain the lack of decay anywhere else.


I dont know. Maybe he is alive.. If his body is not showing signs of decay is it not possible he has slowed his body right down. Like the Yogis of old in India..


I snF'd this because of the questions that came to mind.

We really don't know the extent of our own abilities, do we.


As part of my episode, I examined the ancient practice of self-mummification by a few Japanese Buddhist monks called sokushinbutsu. This 3000-day ritual called for a starvation diet and exercise to lose all body fat, then a slow self-poisoning with an arsenic rich diet, followed by an entombment and final starvation. The lack of body fat, the dehydration, and the high arsenic content actually did combine to make a reasonably good chance for mummification instead of decomposition, assuming fortuitously dry conditions in the tomb. Approximately 20 monks successfully became mummified in this way.

The full article has more information on Itigelov


The cedar box his was put in may have something to do with it-cedar is anti fungal and anti bacterial.
That may have helped preserve the monk maybe?
Not sure why he is still preseved after they took him out of the box though.

Um, yes. But the point you are ignoring is: the degree of decomposition of the monk's body is far lower than what is normal and therefore requires explanation.

It became clear to me there is MUCH MORE to the story than we are told. The entirely miraculous conservation of the body had/has some political motivation. It's a long time ago I saw the movie, so I might not have all details anymore.

Anyway..I vaguely remember those monks being a suppressed minority in a monastery in Siberia ..and the monk, after his death, became sort-of like a political symbol for those monks in that area.

So...the entire thing is simply a stunt, the monks exhumed him, preserved him (clearly evident because they used salt to dry out the body...and even a stick/frame type of thing to keep him upright). And then later on they put him on display as a "miracle" with the added tale of the "unexplained" and magically conserved body which did not compose.

One assertation is bromine salts were used, possibly taken from the Japanese Buddhist ritual.

Can bromine salts actually preserve a human body for 75 years, and in the amazing condition suggested in the case of this Buddhist? (Soft tissues still intact, full muscles, etc.)

Was this body thoroughly confirmed to have zero traces of any preservative? Or are we going off half-cocked based on several articles. --- If no preservatives found, it would be amazing to have other qualified people do tests.

posted on May, 25 2013 @ 06:22 PM
link
Someone did a rather large thread on this type of body preservation already. It's where a particular group of monks change their diet and lifestyle to very strict means that in effect, preserves their body like mummification.

If you do a search for it you will find. Rather creepy I must say...

posted on May, 25 2013 @ 07:27 PM
link
Just to throw petrol on the fire of this discussion, the link you provided claims that he was buried in salt inside the cedar coffin - salt is a wonderful preservative.

This is also far and away not the only 'incorruptible' body ever dug up. The buddhist monks are also not the only one who have bizarre and creepy pickled people on show. Hopefully this link below works, if not, do a google image search on 'incorruptible saints' A lot of the pics that I saw from this search are real and I have seen some of those pictured bodies myself in real life.

As an FYI, how many of you out there realise that the late Pope John Paul the second is now out of his grave and on display in the vatican? He is for some reason painted silver and looks rather creepy, but it's definitely him and he has defintely not rotted away - I've got a pic from my trip to Rome in 2012 around somewhere.

Plus, he looks pretty plump. Fat will turn to a waxy tallowy substance after death if conditions are right.

posted on May, 26 2013 @ 05:13 PM
link
No, it is not a mystery to science.
It is a mystery to you because you don't know then assume.
It is actually a mystery to no-one because most people are educated and know when to chuckle — something you should try.

posted on May, 27 2013 @ 12:02 PM
link
Monks are cultivators. Especially, those cultivating Tantrism have supernormal abilities. I believe this story.

He is not Alive . He was dead and he still is dead

Anybody want to fly there and poke him with a stick to be sure?


What makes you think Tantrism brings them supernatural abilities?