The people will demand it,and want more of it.
Here's some news coming out about the new tech about to be available.

Google Glass is Always Listening, Assuming You Have a Hack
The rumored "wink" feature also discovered.

(IGN.com)-Privacy concerns are a big deal in this always-connected tech age. Beyond the constant litany of reports that social networks are sharing your information with advertisers, in walks Google Glass: a very real device capable of recording the actions of others without consent.

Xbox One: Will Kinect 2 Use Visual DRM?


(IGN)-Microsoft has responded to fresh privacy concerns over a patent from 2011 that suggests Kinect 2 may be used as a form of visual DRM, should the company decide to implement such a measure in Xbox One.

ExtremeTech discovered the filing back in November, which is labelled as covering "content distribution regulation by viewing user." Theoretically, if the Kinect establishes there are more people in the room than is permitted according to the licence that users agree to when renting of purchasing content, the movie won't play


Abstract
A content presentation system and method allowing content providers to regulate the presentation of content on a per-user-view basis. Content is distributed an associated license option on the number of individual consumers or viewers allowed to consume the content. Consumers are presented with a content selection and a choice of licenses allowing consumption of the content. The users consuming the content on a display device are monitored so that if the number of user-views licensed is exceeded, remedial action may be taken.

Originally posted by Black_Fox
Orwell would be so proud.
Big brother,1984?
Thats nothing anymore.
they dont need to be sneaky about it or force it on people.


You know at first I thought they taught kids 1984 so that they would be given a necessary tool to root it out but now I think the opposite and they teach it to kids to fall in line, like they aren't taking away the real message from the book anymore but rather using it as a way further their programming. I can't recall anyone in my class actually learning anything besides the slogans and how good Big Brother was at deception...

Back in the 50's they had these things called cameras that you could use. People used to take photographs, as they were called, all the time. Of anyone. Sometimes, entire streets of unsuspecting people.

What is so invasive with cameras on glasses? You can buy 'spy glasses' as it is. Or a 'spy pen'. But no one went "Ohnoes!!" and instead they went "Ahh now I can be a gumshoe and sleuth my way to infamy!".. only to realise that the quality sucks and people know what you're doing anyway with big whopping fake ray bans.

I can walk around with a mobile phone gaffa taped to my head. No different, if I have the camera recording?

Sure google is in your pocket more than any other technology has ever been, and they're live while they're in there updating your gps locating and grabbing local shops nearby.

You have much more sinister things to be concerned about than this technology that does nothng but improve on things we've had, accepted and desired for decades.

Orwell would be so proud.


Proud? Not likely. Listen to the man himself...

posted on May, 24 2013 @ 06:49 PM
link
There needs to be a way where individuals can copyright their image and/or likeness so that we can sue anyone who posts such without our written consent. That would shut down these google glasses pretty damned quick.

Patenting is a stupid idea. Especially when applied to naturally created objects. It is akin to any other label of superiority (nationalism, racism, etc). Possessing something you are born with should not imbue you with any special rights arising from that possession, be it your skin or lucky geographical positioning.
edit on 24-5-2013 by bigfatfurrytexan because: (no reason given)

on part of the human genome


they are patenting parts of the human body!


anyway... yea they will get us to the position where we want it
bit like how the nazis came to power


how do you get a man, who dines on a plate...to eat from a troth?
impossible?
well give him a bargain bucket of chicken for a year... then try

Patenting is a stupid idea. Especially when applied to naturally created objects. It is akin to any other label of superiority (nationalism, racism, etc). Possessing something you are born with should not imbue you with any special rights arising from that possession, be it your skin or lucky geographical positioning.


My image is my own. Your image is your own. Should I be able to snap a pic of you and the photoshop you in a compromising situation then post it as I please? I think the law is seriously behind the times here. People should not be able to post your picture online for the entire world to see without your consent; with or without modification. There is a huge difference between someone seeing you on the street, and that same someone posting your picture on CIABook without your permission.


As to your thread title, exactly, "who" is the who, you judge wanted this??

Just have to ask. Surely you realize it is far more multilayered and complicated than that....perhaps not. Perhaps everything, really, is just propaganda, to incur judgement......and then produce the "unity" that was the promise of Big Brother.....
edit on 24-5-2013 by tetra50 because: (no reason given)


There is already a 1984 society right down to the clothing !! 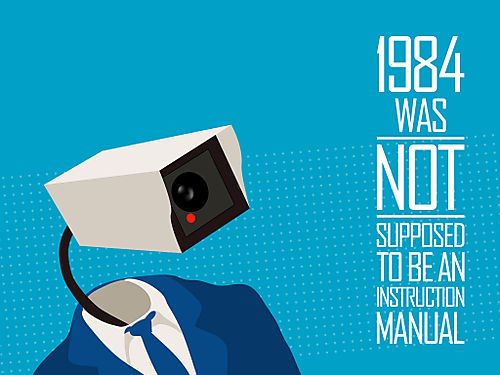 
katbutler33 1 year ago Some other similarities I noticed: -

In that "utopia" you don't have to fend for yourself, think for yourself, act on your own behalf, or claim any personal responsibility.


If the picture is of a public place, then I have no claim of privacy.


It is not so far fetched. People copyright their images all the time. Mainly movie/music stars. It isn't like you can use a star's likeness without paying for it. One interesting example is Steve McQueen.


Current practice has little to do with what is proper or not. As an example, i hold the possibly quaint belief that trademark rights should be stifled. As an example....if i paint an image that has a billboard in it....it would likely be accurately portayed as a city scape to include that billboard. But if i put an actual ad on that billboard in my image, I would not be able to sell that image. So, in essence....I am painting a cityscape image as part of an urban art project. In that image I have to omit parts of the landscape, the billboard ads etc, for risk of having to pay royalties to the companies owning the trademarks in those ads.

How did we paint ourselves into a corner where we cannot even accurately portray our environment without being sued?

Originally posted by bigfatfurrytexan
How did we paint ourselves into a corner where we cannot even accurately portray our environment without being sued?


Originally posted by bigfatfurrytexan
How did we paint ourselves into a corner where we cannot even accurately portray our environment without being sued?

But i am talking more about what has caused people to believe that they can copyright anything they want to try to make money from? This consumerism....it is pervasive.


I think we are pretty much of the same opinion on this. I don't like it that corporations can patent and copyright everything in existence and call it proprietary. There has to be limits. But if the laws allow them to do it, I happen to believe that right should extend to the private individual as well, at least where his own image is concerned.

posted on May, 25 2013 @ 08:27 PM
link
You're right, people will want it and demand it. The illusion of safety is more appealing to people than freedom these days. People will accept almost anything.

As for Google Glass, I don't see it as an invasion of privacy really. People can already record you in public with their cell phones, there is no expectation of privacy in public... but Google Glass and other "spy" glasses can be harder to spot than a cell phone pointed at you though, I think this is where people have issues.

Concerning the Kinect, THAT I have personal problems with. It's right in your living room, it gives Big Brother a front row seat into your home. I'm sure the video and audio can be manipulated to turn on without consent! If that "per-user-view" feature really exists, wouldn't people have to give consent to Microsoft to be allowed to view into your home?
edit on 25-5-2013 by Dominar because: (no reason given)