This video proves the use of demolitions to bring down the WTC, Photographic evidence and Witness testimony...
Truth is Truth and shall be known

I do not agree with the lady speaking at the beginning of the video, WE do know who did it, God knows The Akashic records know...

ALL shall be revealed in due time..

So very truth thx . one of﻿ the best documentaries ever awesome work. And the truth shall set yoh FREE!

this documentaries should be played on main stream media.and translated to other language﻿ so rest of the world should know about Zionist dirty work.


I never would have expected to see this thread started by you corn to the copia... That being said... I thought it's now "Common Knowledge" that this was a inside job? I guess I"m wrong.

Have a great Memorial Day Weekend! Pending the side of the earth your on or just a Safe and Happy Weekend!

Wizayne
+7 more
posted on May, 24 2013 @ 04:04 PM
link
To any normal person it is obvious that 9/11 was a false flag on ourselves. I don't argue about it anymore. If you can't realize that 110 story buildings don't just disintegrate into nothing, then you aren't worth talking to. Period. To those that know what DIDN'T happen(the OS), you have a brother in me.


911 In Plane Site ~ Directors Cut
It's not wise to advertise anything by Dave von Kleist as he (and those over at Lets Roll) like to peddle the "pod" disinformation that's been debunked for almost a decade HERE.

posted on May, 24 2013 @ 05:01 PM
link
And now after watching the entire video, there are several discrepancies that a real researcher would've corrected and thus not introduced into this video.

First was the part where firefighters are heard saying "There's a bomb in the building, start clearing out". That had nothing to do with the WTC. It was a bomb scare at Stuyvesant High School about five blocks away from the WTC where a command post had been set up: 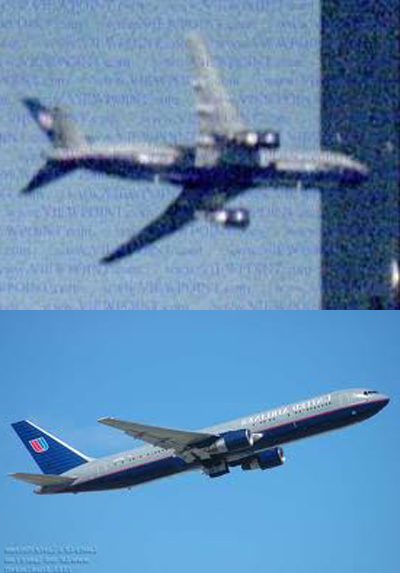 Those witnesses who saw a gray plane would've viewed the plane from the west of the WTC as more of the gray paint was showing as the plane was banking. Those who saw black were on the east side of the WTC and were referring to the dark blue paint on the bottom of the jetliner. The dark blue would be even darker when the plane entered the shadow of the smoke from WTC 1.


People making these documentaries really should have their facts in order before producing such videos.

posted on May, 24 2013 @ 05:34 PM
link
The fact remains 9/11 was and had to have been, an inside job.....
We may not know the details, but we do understand enough physics to realise we were lied to.....
And the most poignant and pertinent questions were NEVER ANSWERED by the phoney investigation.

We can now go to court and have the guilty criminals stand trial.

Isn't it? Can't we? But I thought there was PROOF now?

Damn, I guess I got all motivated for nothing, I need to keep my dictionary close by so I can verify what words like PROOF mean...

Originally posted by Mamatus
And Obama is a Foreigner, and Climate change ain't real....


LOL, and so how should this video have been made?

then i could say it was proof?

Originally posted by cornucopia
LOL, and so how should this video have been made?

Well, how about using facts instead of silly truther made up stories, as has been pointed out?

posted on May, 24 2013 @ 05:41 PM
link
"And now we are being bombarded with messages that Osama Bin Laden is planning to attack the United States of America. And I'm telling you, be prepared for a major attack. But it won't be Osama Bin Laden, it will be those behind the NWO. It is very likely that they will stage a terrorist attack."

"Whatever is going to happen that they're going to blame on Osama Bin Laden don't you even believe it. When in hell... are all you people going to wake up?"


So how do sagging trusses pull in columns?

That is NIST's silly made up story.

How long would it take?

How much and type of explosives would be used?

Would they be hidden or in plain view of build occupants prior to detonation?

What prepping of the buildings would have to be done prior to setting the explosives?

Would the detonators be hard wired and how far away would they be? Are remote detonators used, what distances?

What evidence is left after a controlled demolition of explosives that were used?

These are just some of the questions I've always wondered about.


But you've never wondered how sagging trusses can pull in columns?

Originally posted by ANOK
reply to post by Carreau

But you've never wondered how sagging trusses can pull in columns?

Plus in about 20 posts of mine you seem to consistently want to pretend do not exist.

Be impossible to use the same modality for the 2 towers. Steven Jones is incorrect and was planted to direct people away from the Directed Energy Weapon theory(fact)... Star Wars SDI Marconi Defense projects that Regan championed never ended...it simply went Black...deep black and the technologies got wilder....makes ya say No fkin way as it is supposed to.

The harder it is to believe the easier it is to hide but they couldn't risk it so they sent Steven Jones and the thermite theory.


Yes the Akashic records knows or should I say God mind knows,,, in which we are all part of. But thats another No fkin way realm.


No, you are pretending that proof that trusses can sag is proof they can pull in columns.

Explained in the reply you keep ignoring. Here...

You have not supplied anything that says sagging trusses can pull in columns.

Now please stop before you hijack another thread.