Funny old inventions from the past.

posted on May, 25 2013 @ 12:01 AM
link
The "Isolator." Because earplugs are not technical enough. There is nothing wrong with putting babies in cages, although hanging them out the window is probably a bad idea. Think about it. We have play-pens, which are basically cages for babies, plain and simple. I remember seeing the curved machine gun barrel on television or something a long time ago, but I don't remember how well it worked, if at all.

I don't have kids or live on the second floor but if I did, I'd use this awesome device every day. Of course, I'd make mine a lot stronger - but I can't see any drawbacks to this device if it's designed well enough.

No drawbacks at all apart from the horrible death the baby will suffer when the cage eventually fails and plummets to the earth. It makes me cringe just looking at it.

It's also possible the baby may be absolutely terrified. I know I would be.

Thats why i said I'd make mine stronger - the cage in the picture doesn't look too strong and that kid is Fat.

I think most babies will not be afraid. We learn fear as we grow up. People teach the babies to swim by throwing the baby into the water - those kids don't have any fear of water yet so they learn to swim very young. I think if you let the baby approach the cage at his own pace he will be fine with it.


i thought it was a cool idea as well with some adjustments to make it safer.

you bring up a good point, tho it is the opposite of the point you wanted to make. i thank you for that. thing is that throwing babies in water to teach them to swim, is not only a barbaric practice that should be outlawed. but it can lead to said baby having hydrophobia for the rest of their lives.

so i guess this device could just as easily lead to a fear of heights, as such it is likely a bad idea. (sigh) and it looked so cool.

Miles Cramer, a jobless inventor, was found dead in his Chicago home with a bullet in his heart.
At first it looked like murder because no gun was in the room, but police experts later decided that Cramer had placed a bullet in a piece of lead pipe, lighted a gas jet, and shot himself when the flame exploded the bullet.

"It was his one successful invention" said his wife when she was told.

I'm picturing wealthy people in 1924 mowing down the undesirables with their brand new pedestrian plow. WTH?


For a moment I thought that might be from an actual menu or cookbook, as bizarre as it might be.

Then I realized it is from a Dark Horse comic.


Awesome pics. Funny how some things qualify as inventions 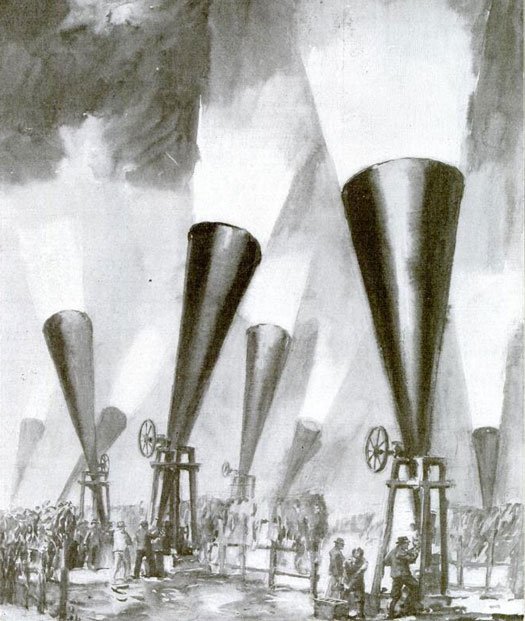 Few things would be more convenient than the ability to control the weather, but the technologies we've developed toward that end haven't exactly made life easier. Hail cannons, which predate the invention of gunpowder, experienced a brief revival in the late 19th century when residents of Styria (in modern-day Austria) devised a special gas-based mortar supposedly capable of preventing hail. By the year 1900, more than 10,000 hail guns had cropped up across Western Europe. Given their popularity, it's a shame that the cannons proved useless. Scientists commissioned by the Austrian and Italian governments dismissed the weather guns after finding that they failed to "agitate" the air or change the composition of clouds. Even if the mortar could affect one oncoming storm, it was highly unlikely that they could prevent future hailstorms altogether.

Just look at that kids face. There is nothing positive about that position at all. All his pedaling gets him only the same distance to his father's sweaty arse. 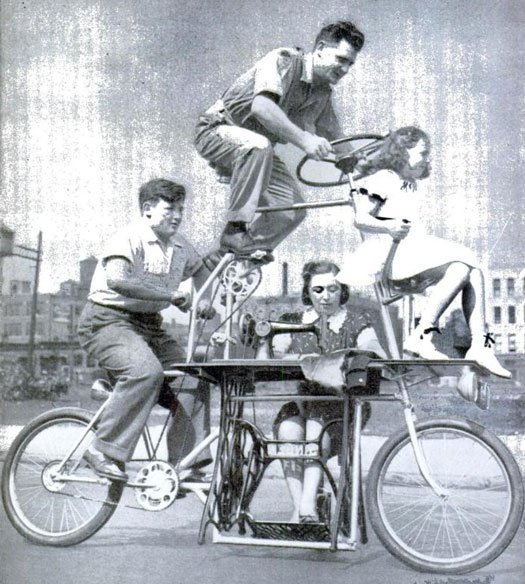 In 1939, we declared Charles Steinlauf's "Goofybike" the world's weirdest bicycle -- and for good reason. As the photo shows, the bike could carry four people and a sewing machine. The inventor is pictured at the top of the bicycle, where he maneuvers the machine using an automobile steering wheel. While his daughter sits on the handlebars and his ever-industrious wife finishes her sewing, their son huffs and puffs at the pedals. The legs of the sewing machine keep the bike aloft when it's not being used. Family outings don't get better than this! 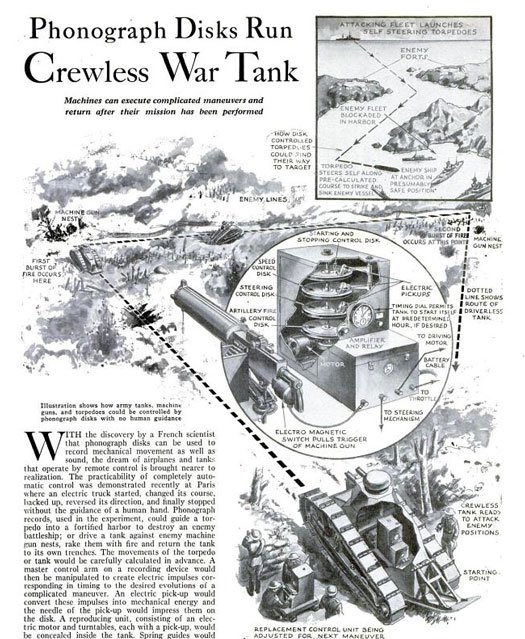 After discovering that phonographs can record mechanical movements as well as sound, a French scientists proposed designing crew-less tanks that could be maneuvered using pre-recorded instructions. Four disks would be used for communicating orders. The first one would start and stop the tank, the second would steer it, the third would control speed and the fourth would be in charge of the gun.

In retrospect, this innovation presents more problems than it actually solves. The records would probably get stuck while the tank drove over unpaved terrain. On-the-spot thinking would be irrelevant - if the enemy did something we didn't predict while programming the tank, we'd be dead. To this day, we're still figuring out how to optimize automated vehicles. If the Mars Rover can't speed around, how much more difficult would the process be for a tank driven by phonographs?

To bad, it seems really hard for the average person to get an idea off the ground lately. It takes money to make money unless someone with deep pockets is willing to take a risk with you. They decide more of your fate than yourself.

Just doesn't seem right...almost designed, one would say. Keep the money in the hands of the few and dangle that carrot just above our heads. Everyone gets a biting chance, the weak ones will just die off...

The masses keep whacking that pinata hoping to make a name for themselves and nothing comes out but sucker pops. Evolution has been bottle-necked and there are armed guards at the gates. 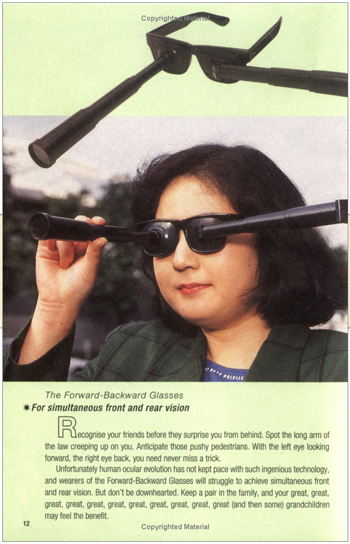 “Self-defense sunglasses” with which you can see your back. But while you are adjusting the angle, you might be attacked.

posted on May, 25 2013 @ 09:13 PM
link
War Tank run by phonograph records. So that is how Disney was inspired to create Audio Animatronics for Disneyland and Walt Disney World.


The curved machine gun allows a soldier to shoot around corners as they take cover on one side. It was invented by Nazi Germany with great success but it came too late in the war. The Israelis have created a curved gun with greater accuracy.

Originally posted by EA006
reply to post by PGTWEED