A ban on Super hero play at a pre-school.


A school flyer has emerged online warning of the dangers of superhero antics. ''The imaginations of our preschool children are becoming dangerously overactive causing injuries within our pre-k community,'' the flyer says. It then spells out a ban on imaginary play: ''Wrestling, Super Hero (sic) play, and Monster games will not be permitted here.''

Here is a picture of the flyer - 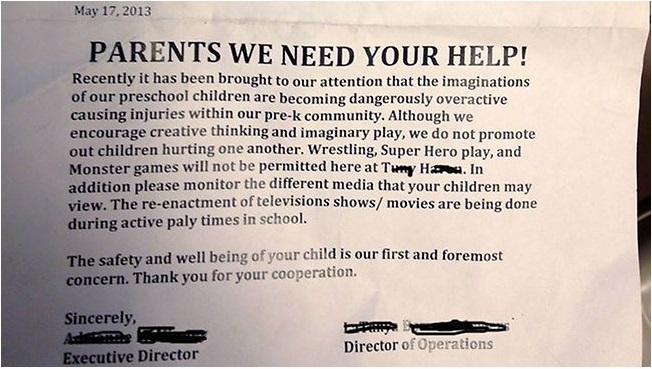 Banning pre-school kids from 'Super hero' play? What are they going to do? chastise a child for pretending to be superman or spiderman? How can they say they encourage creative thinking and imaginary play when they enforce this?

posted on May, 23 2013 @ 12:08 PM
link
These schools are getting crazy. My son's elementary school decided to ban dodgeball from recess about 2 weeks ago. My son would play every day. They have been dodging my phone calls about it since he is quite unhappy about the situation.

They have told me that it's "being reviewed" as to whether it will be brought back next year; but weren't clear on what the reasons were for why they suspended the dodgeball play to begin with.

PC actions are getting a bit over the top here.

posted on May, 23 2013 @ 12:17 PM
link
Glad I had a fun childhood with my imagination running wild with friends. When I have kids I'll be sure to make theirs go wild as well but not to the point of them hurting themselves. I think that's just what they are forgetting to instill. That imagination is fine it's just when it goes to the point of them hurting themselves that they see the imagination ( as a whole in a way? ) being a problem.

posted on May, 23 2013 @ 12:17 PM
link
Even if you are pretending to be a blood thirsty werewolf it is still PRETEND. I think the school is looking for an easy day of babysitting children. They should foster imagination instead of suppressing it.

Yes, we are not teaching these kids to think for themselves, and cannot allow them to do it on their free time as well.

posted on May, 23 2013 @ 12:19 PM
link
Kids can play imaginatively without being violent little destroyers. A good parent makes sure of this. A terrible parent has a yahoo child with no sense of respect.

posted on May, 23 2013 @ 12:22 PM
link
I pretended to be batman when i was younger, I had the the whole costume and i also used to pretend to have powers and my whole family would join it haha. now we can't even be in the same room with out us fighting and yelling at eachtother.

It's superhero play but I'm not being violent in any way.

I could also play "tax man" and berate and belittle the other kids for personal information.

Not a superhero but sure is violent.

posted on May, 23 2013 @ 12:34 PM
link
Lol, when my friends and I were kids we would run around the playground pretending to be in an alien-space-war, shooting each other with imaginary guns. If kids were to try something like that now they'd be put in a straightjacket and deported.

posted on May, 23 2013 @ 12:35 PM
link
reply to post by Lady_Tuatha
I've come to the sad conclusion that they just don't want kids to be kids anymore. Let's just diagnose all of them with mental illnesses and put them on a lifetime supply of powerful, mind-altering narcotics so that they become complacent little robots who do what they are told and nothing else. Why do people even bother having children anymore if they are going to allow this to happen to them?

posted on May, 23 2013 @ 12:36 PM
link
Actually..... I can imagine that there might actually be a legitimate problem which the pre-school is trying to deal with.

Kids sometimes play a bit rough, of course. But exposure to media can make a difference between a bit rough and a bit dangerous.

When a 3 year old boy I know saw Kungfu Panda, he was Kungfu-ing all over the place for about 3 to 4 weeks after. Also, I know a lot of pre-school age kids who get to watch things which really aren't appropriate for their age.

Look at it this way, if the kids are playing wrestling, where did they learn that from? Is watching wrestling appropriate for pre-school age children?

I happen to know that this is something which stands out as very obvious to teachers. It's highlighted. Kids bringing what they see on TV into their reality, internalizing it and living it. Because it's what kids do, it's how they learn and how they will continue to learn right into their mid 20's. It's called imitation and it's the most powerful and effective learning force there is.

Kids learn by imitating and they automatically imitate everything they see. If they're imitating realistic depictions of violence, that's going to be a problem.

Young children learn through play. And guess what...from the ages of 4-7 is the most "violent" phase of a child's life. Give a child this age legos, and he's going to build a gun. Give him pencils, he'll build a gun. Heck, give him a cat, and he'll make a cat gun. Its what little kids, especially boys, do.

I don't understand this. In order to get a teaching license, you have to take developmental psychology. These teachers KNOW this is developmentally appropriate for young kids. So why are they trying to stop it?


You can probably reduce that a step further.

In a world run by fraidy cats and guarded by the mechanized police state Everything is dangerous...

posted on May, 23 2013 @ 12:46 PM
link
Never trust a communication from an educational institution that was not proofread.

Signed,
Someone who pulled the curtain rods out of the drywall, creating large holes in the walls, while sitting in the "swing" created by the pulley used to open and close the curtains while attempting to fly through the air ala Hung Kung Phooey in 1977.
edit on 5/23/2013 by chasingbrahman because: (no reason given)

I will say this..parents, do let your kids know wrestling is all fake (fun to watch though), but the moves done are done by specially trained people.

-nearly got his neck broken playing wrestling and doing actual wrestling moves when 7 years old...also nearly broke his back-

My brother broke his leg after attempting to fly off the roof of my great-grandmother's house.

Turns out he's not superman.

I am really scared to have my child grow up in today's school system. The more I see the more I want to homeschool him.

This is just beyond stupid and ridiculous. So now having an imagination is dangerous?! Wow..

When I was a kid we played ALL kinds of games. I remember playing Freddy Krueger for heaven's sake!! We played cowboys and Indians, cops and robbers and so on. I was not scared nor did I become a violent and dangerous member of society as a result.

Having an imagination is a good thing!!