Sunspot 1745, CME is not straight in our direction but some influences will have on Earth .. 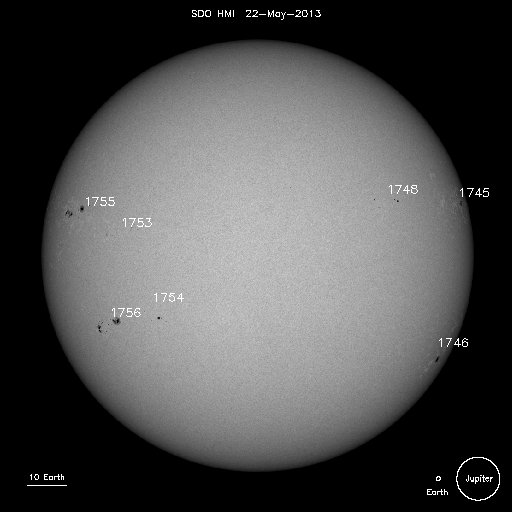 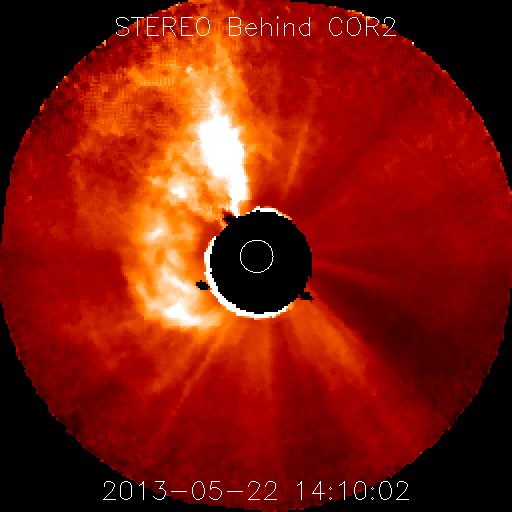 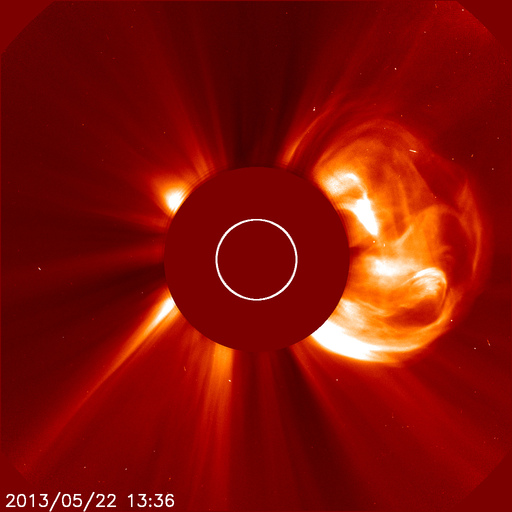 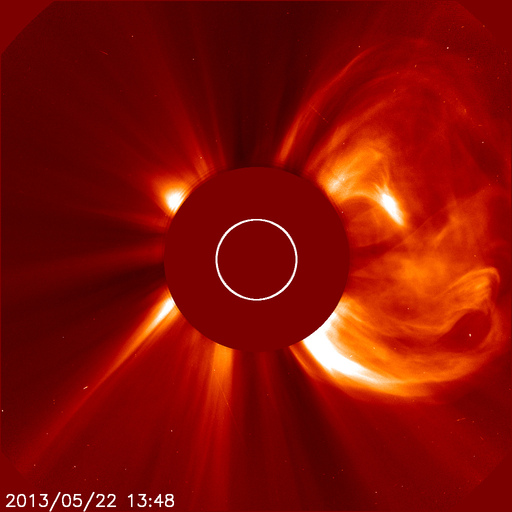 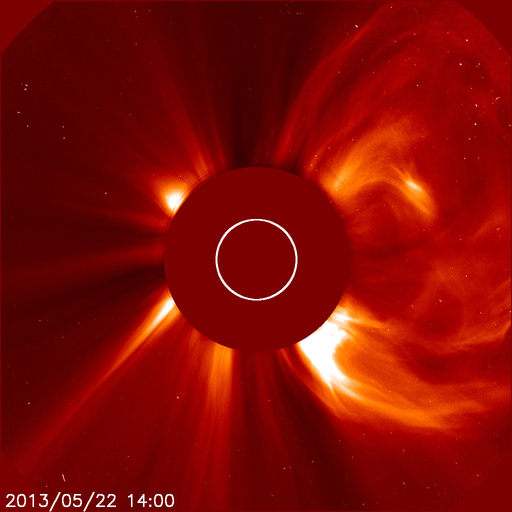 Also probably we will have some stronger seizmic activity in next 72 hrs ..


Why should we all have to die too? Go stick your head in a microwave. But seriously, it's a good thing that it wasn't pointed at earth. And it would need to be pointed directly at Earth for the magnetic field to be overwhelmed and melt down the power grid.

We wouldn't of course be fried all at once. Only half of the world is pointing at the sun at any given time. Interesting though. One side would be psuedo normal and the other would get the middle ages.


Holy crap~ That video was awesome....


Maybe that would be the kick in the pants the human race needs to move past this petty existence.

Originally posted by sulaw
How long would it take if it was going to hit us? 2-3 days? Less? Please advise~

Yes, probably around 50 hrs from flare ..

Fortunately CME was not straight in our direction but we will probably have strong geomagnetic storm, solar radiation is high and is already here .. 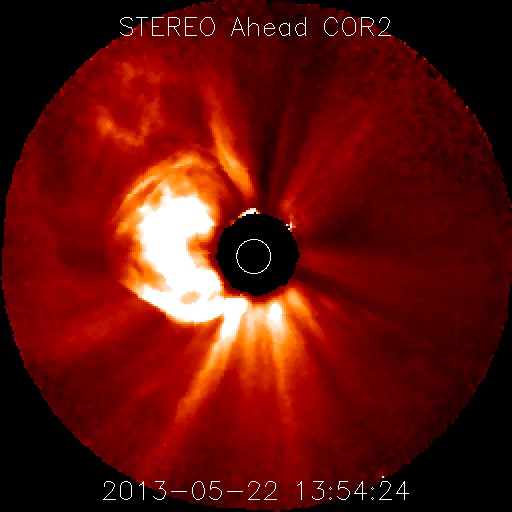 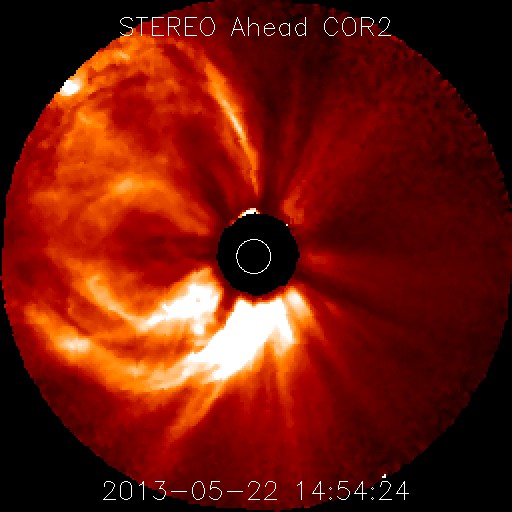 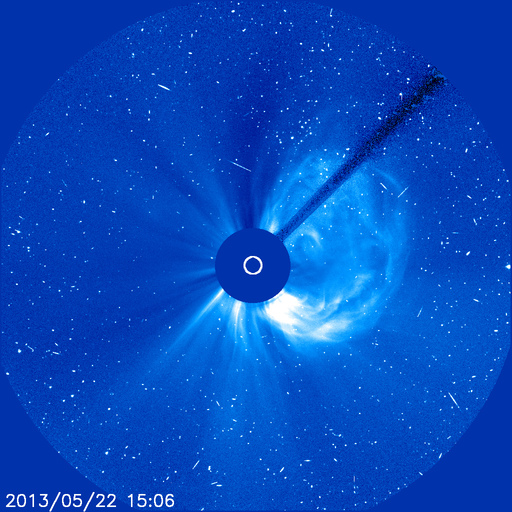 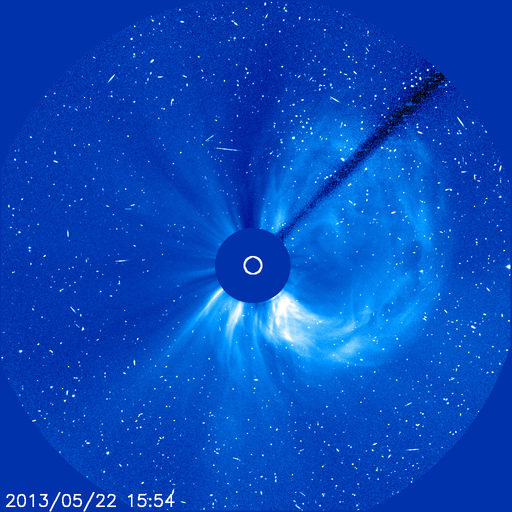 
It will definately be a interesting memorial day weekend then... Hrmmm... I wonder if we will see a influx in strange weather patterns with this one... This will be interesting to watch to say the least~

Originally posted by XLR8R
reply to post by intrptr

Maybe that would be the kick in the pants the human race needs to move past this petty existence.


Destroying everything will make it all better, huh? People that think like that are the ones that need a "kick in the pants".


No, not destroying everything. Just pushing the reset button. And yes, petty existence. Working endlessly at a job that deep down most know it's totally with out purpose only to pay bills and fund global terror through taxes and what not. Push the reset button and people will find a purpose again. We would actually have to be productive to live. Much more fulfilling than mas producing radio knobs 12 hours a day and lining pockets of the corrupt. It would also bring back natural selection to the human race again. We desperately need that.
edit on 22-5-2013 by XLR8R because: (no reason given)
edit on 22-5-2013 by XLR8R because: (no reason given)


Couple of years back i felt the same way, then i pushed my own reset button.

I enjoy waking up every day. Growing in faith. Becoming more positive, day by day. My life ain't petty, anymore


Luckily it ain't heading our way


Are you saying you regret starting over? It's crazy hard to start over in this day and age. I started over 6 years ago. Thank goodness I had great friends.

When I say push the reset button I mean on a global scale. Everybody, only dependent on themselves. You want eggs for breakfast, get some chickens and raise your own. You want steak, share a cow with a neighbors. Veggies...garden. Although it would be the hardest thing I would have to do in my life, I would welcome it.

Originally posted by XLR8R
reply to post by intrptr


No, not destroying everything. Just pushing the reset button. And yes, petty existence. Working endlessly at a job that deep down most know it's totally with out purpose only to pay bills and fund global terror through taxes and what not. Push the reset button and people will find a purpose again. We would actually have to be productive to live. Much more fulfilling than mas producing radio knobs 12 hours a day and lining pockets of the corrupt. It would also bring back natural selection to the human race again. We desperately need that.
edit on 22-5-2013 by XLR8R because: (no reason given)
edit on 22-5-2013 by XLR8R because: (no reason given)

No thanks. Do you realise how many people would die? Not to mention the odds are better than good you and people you know would be in that group of people 'naturally selected against.' Sure you can pretend you could survive the social and environmental disaster that would follow; but anything that kills the national power grid, takes out the ability for the nuke plants to cool themselves too. So rather than 3 ongoing meltdowns, in Japan, you could add in every single nuclear plant that was online when the power grid dropped. 3 days of fuel for what ever generators that survived & boom, all the plants likely go up like Fukushima.

While the nearest Nuke plant that could likely affect me is in Nevada, I'd still end up having to worry about it.

Then there is places like the CDC that study bio threats, not to mention the government's undisclosed labs, and research labs across the nation. Loss of containment there would likely occur as well. Hello 'Captain Trips!'

Add in the lack of clean water supplies and the dead that no one can bury and your chances of survival drop even further.

Yes preppers and the like off, in their bunkers might have a better chance, if they can get to their bunkers. It is not like the sun is going to give them more than 50 hours or so to get out, if the storms didn't fry the power grid with an emp like effect well before then.

But such an event is likely to impact those bunkered up people too. After all, even with 5 years of food in their bunker, do they have that much water too? What happens when they step out to start society again? All that unseen rad waste and fall out will still be there.

Not to mention if anyone in those bunkers has a medical condition requiring medicine daily, insulin and the like; they'd have what 6-8 months if they are lucky to live?

I don't want to be the one to bust your bubble, or pipe dream; but I suspect you'd rather have the crap job of making radio buttons and not starving to death or suffering from radiation poisoning and or disease. Or watching people you know and love die from all of that.

If it is about the cool vid, thanks for sharing! (and ignore the rest then)

HOWEVER, it seems like your thread is about something sensational or unusual. And there is zero of that here, especially with a CME that only has chance of a partial blow, and a M5 flare, which is no big deal, at all.

Quoted the below from www.Spaceweather.com and highlighted the important part myself:

"A solar flare is an explosion on the Sun that happens when energy stored in twisted magnetic fields (usually above sunspots) is suddenly released. Flares produce a burst of radiation across the electromagnetic spectrum, from radio waves to x-rays and gamma-rays. [more information]

Scientists classify solar flares according to their x-ray brightness in the wavelength range 1 to 8 Angstroms. There are 3 categories: X-class flares are big; they are major events that can trigger planet-wide radio blackouts and long-lasting radiation storms.

M-class flares are medium-sized; they can cause brief radio blackouts that affect Earth's polar regions.

M flares arent anything but cool to watch. A M5 deserves a mention in the Space Watch thread, but thats it.

Thanks for the CME vid, and I really hope this was not sensational bs.


I do not regret "restarting" my life

I get what you are saying, and i agree with you, to a certain extent. I still would not choose it. If a major flare should wipe out earth's power grid and we get to say hello to a new stone age, the world's governments and TPTB would be one of the last things on my worry list.

We will have to look over our shoulders non-stop. Our neighbors, friends and even family will be stabbing each other in the back, not to mention the average Joe we don't even know. Survival.

But, i do understand where you are coming from

Originally posted by lasertaglover
This link shows most of the material moving away from us.

It's already posted and from original source ..