But some may not be aware of the “Colorado UFO Ranch” in the Rocky Mountains where 2 decades earlier a similarly bizarre ‘paranormal theme park’ seemed to exist? Cattle mutilations occurred, UFOs, ET humanoids and Bigfoot type creatures appeared. Then there were the strange messages broadcast over stereo speakers, electrical power failures, and truly bizarre intrusions around the house.

An investigation was made by John S. Derr and R. Leo Sprinkle for an APRO (Aerial Phenomena Research Organization) report in 1978. The witness wished to remain anonymous. Initially they said nothing, fearing they would be treated as crazy, but finally reported their experiences as the phenomenon escalated. The story was covered in Timothy Good’s book “Alien Liaison”. The witnesses were a group of friends who pooled resources to purchase and re-furbish the cattle ranch in the space of a few months in the mid-1970s. There was ‘Jim’, a former USAF Security and Public Relations Officer, ‘John’ an executive for a large corporation and his wife ‘Barbara’ and three sons. There was also a former law enforcement officer who has never been named (even with an alias) who talked about the events.

Almost as soon as the group had settled themselves into the ranch strange events began to occur.

They experienced a variety of unusual events:

1. A humming sound was often prevalent throughout the ranch house, although this noise could not be traced to the newly re-wired electrical system, or any devices in the house. The humming sound seemed to follow a pattern of being heard during a wind storm and for an hour or so after a wind storm.

2. Noises were heard as if an intruder was walking around the outside of the ranch Sounds like someone opening a car door and beating on the walls and doors of the house were heard.

3. Strange "Big Foot" like creatures were seen in the woods.

4. Multiple UFO sightings occurred. One including 9 glowing disks setting down near the pond, a light flash was observed by Jim and John from the windows, simultaneously Barbara who was sitting on a couch experienced a "blow to the head” falling unconscious to the floor. She was fortunately revived in less than a minute.

5. A large "circle" (approximately 75 feet in diameter) in a clearing would not support vegetation although by 1978 it seemed that grass and weeds were growing again.

6. One morning Jim awoke, but was paralysed by something, and saw a tall, skinny creature wearing a helmet standing in the room by the glass door, observing him. The creature appeared to have 3 tubes connected to the suit. He was able to scream and the creature disappeared.

7. Whilst neighbouring ranchers did not suffer electrical power outages the ranch would often be plunged into darkness without electricity.

8. During one of these electrical blackouts, all of the radio and stereo systems on the property appeared to broadcast a message saying, "You have been allowed to remain. Do not cause us to take action which you will regret."

9. Around the time of UFO activities, a cow belonging to the ranch was found to have been mutilated.

10. A young bull, not belonging to the ranch was found with his head twisted back various organs had been removed with what appeared to be surgical precision. 11. Jim spotted a landed disk in the woods, with two humanoids nearby. He and the oldest son in the family saw what could only be described as a box (3 ft x 1.5 ft wide x 1.5 ft thick) emitting strange hums and other sounds whilst multicoloured lights flashed on and off. Jim believes the humanoids were expecting him and was told by one of “humanoids” not to go near the "box”. Then a Big Foot like creature was seen walking toward the box and suddenly fell to the ground. The humanoid said to Jim, "As you see, it can be lethal."

They spoke to him in perfect English and told him that they were sorry for the inconvenience and disturbances on the ranch. They said that they expected some changes to occur in the events which were happening at the ranch. However, after this encounter, both the strange events, and level of tension increased for the residents of the ranch.

15. A fire began on the front porch of the ranch house, apparently started by electrical wiring in contact with paint buckets on the porch.

The residents eventually left the ranch due to the fear, stress and extreme weirdness they had encountered by 1978.

A local law enforcement officer was also interviewed about the odd happenings at the ranch. He stated that in 1975 there had been hundreds of cattle mutilations reported to which he had been asked to investigate. The following year there were less than a hundred. By 1977 there were less than ten reports. This he said was due to following a policy to not attend to these type of calls to reduce the number of official reports. Although he was unsure if the directions had come from the government or were something more locally enforced.
The officer also recalled a number of UFO sightings whilst out on night patrol. Although he had not seen humanoids himself he did feel that all the usual explanations of hallucinations, aircraft and military tests did not adequately explain what was going on in the area.

There is much, much more to this story which I am yet to read in full.


Cattle mutilations, UFOs, Bigfoot, strange poltergeist like activity and humanoids who appear to speak perfect English. What was going on?

Why do these areas seem to exist?

Are they portals to other dimensions?

Is there some kind of unknown entity or force that exists and has the ability to trick human minds?

Or is there a down to earth sceptical explanation?

I read your OP and am about to investigate the links you provided. Cattle mutilations are so weird to me. Whenever I read all these alien accounts, at the back of my mind is always the question of whether it could be our forces testing out new weaponry, guidance systems or doing beam precision exercises. However the mutilations are another topic, or could they be related to beam testing? As you can tell, I'm not sold on any particular scenario, preferring to wait until we get some plausible answers.

I haven't looked this up yet but I would like to know the latitude and longitude of skinwalker and the rocky mountain ranch. If they were along the same lines, then maybe there is something to the whole "laylines" phenomena that needs to be explored more. im going to do a bit more reading on the links you provided but very well done sir
edit on 19-5-2013 by gnarkill1529 because: (no reason given)

posted on May, 19 2013 @ 02:06 PM
link
The Ley lines idea may have merit.
The skinwalker and this colorado place ive always thought were one place...nit two.
Thanks for the APRO reports ive heard this story a while back....isnt there some gigantic wolf like things involved too?


I know that the stories of Skinwalker mention something of a wolf like creature that either the ranchers or the authorities of that area chased around at night. There was even one story about a wolf like creature leaning up against a tree smoking a cigarette haha. I would take that with a grain of salt though.

More interestingly though, Skinwalker is an old native American term. They believed the "Skinwalkers" where other native americans who could take on the form of any animal. There is a whole backstory of the two tribes who inhabited that area long before it was modernized and the "Skinwalkers" play a pivotal role in the culture of those tribes.

Also I looked up the latitude and longitude of Skinwalker Ranch And this Rocky mountain Ranch which I belive is the old Evans Ranch. They both set along the same latitude of 39 Degrees but differ in longitude by 6 degrees
edit on 19-5-2013 by gnarkill1529 because: (no reason given)


Another interesting parallel to the two ranches is at both places the residents describe what is said to be a "Box."
Granted the "Box" at Skinwalker ranch was described to be about the size of a refrigerator unlike the slightly smaller "Box" at the Rocky Mountian Ranch. I have never really Heard of sightings of small boxes besides these two ranches?
edit on 19-5-2013 by gnarkill1529 because: (no reason given)

If you have more links to that old investigation magazine, I'd be grateful. It looks like that wasn't the end of the investigation. Definitely a lot of similarities with the Skinwalker Ranch but not the same place. Also interesting that it was right next to a military base, (they said they could see it from their place) so that should narrow down the location.

posted on May, 19 2013 @ 08:58 PM
link
I would be curious to know it the long/lat correlates to the harmonic co-ordinates like what is pertained within this information below. 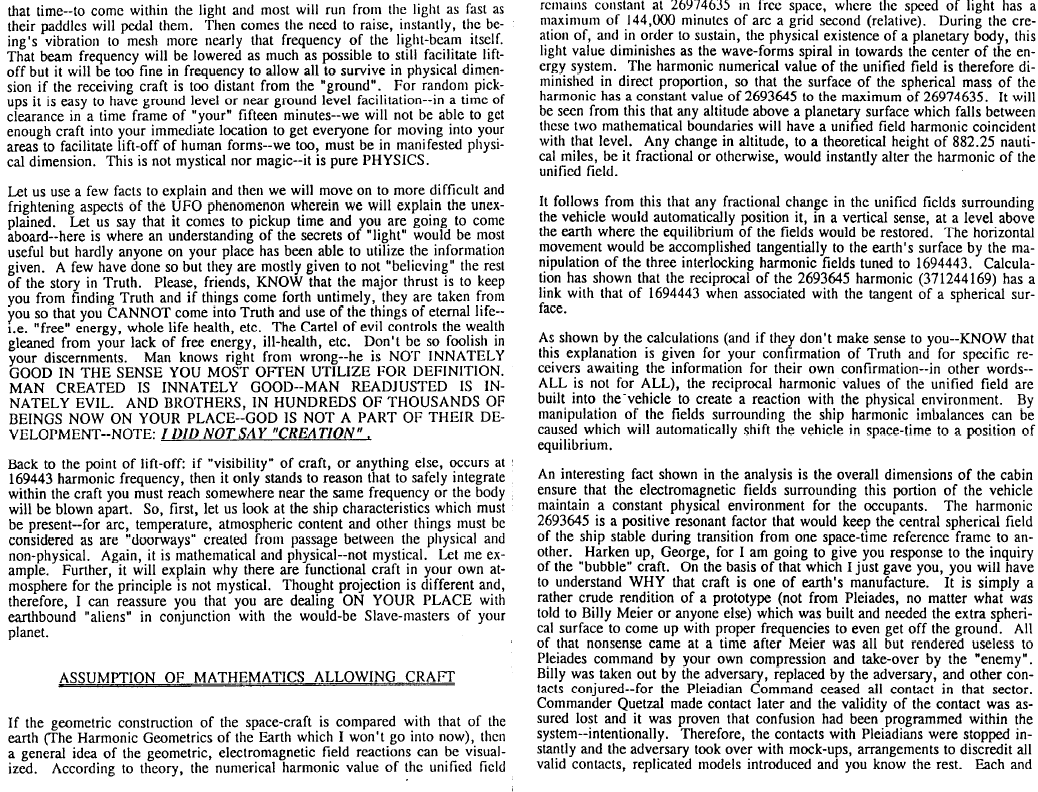 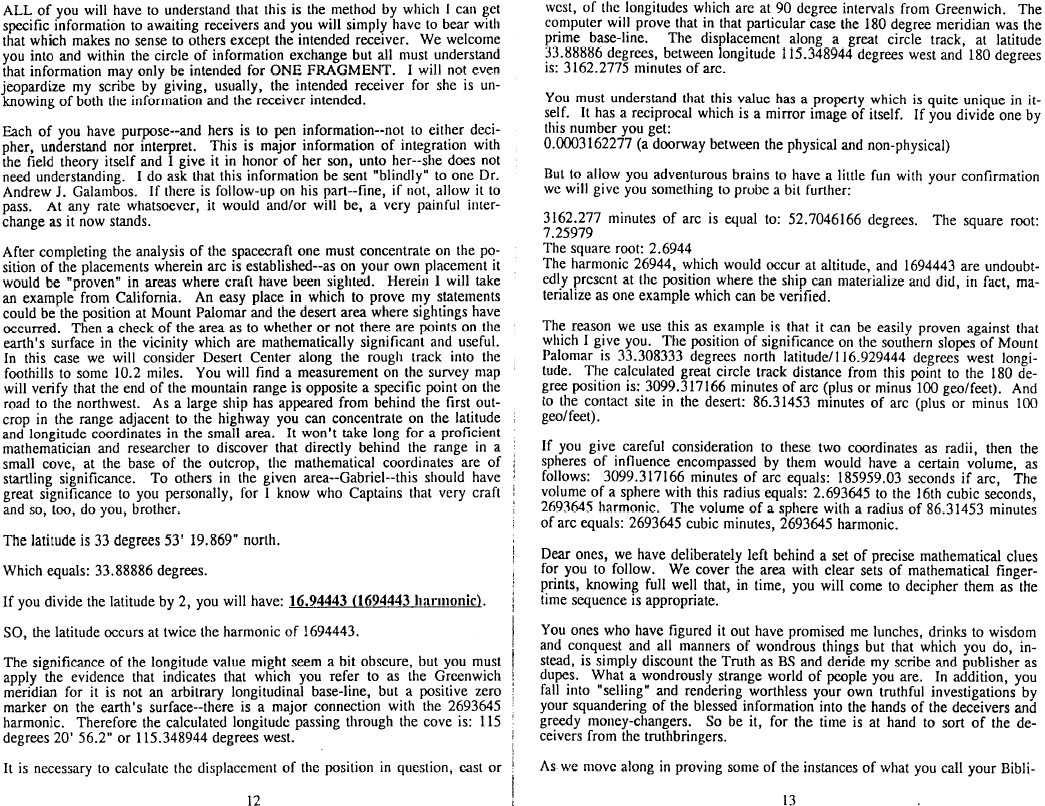 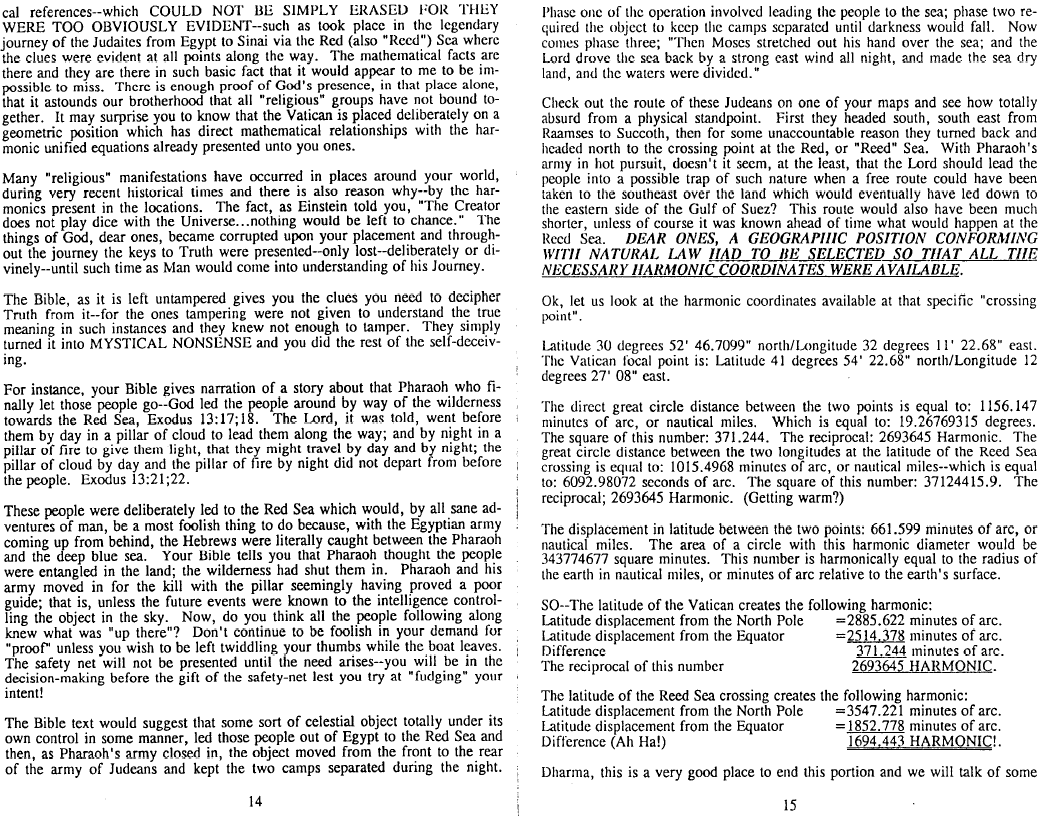 
You wouldn't happen to have a link to that information would you Assassin?

I would be interested to read more about that, but honestly I have horrible vision and that small writing is very hard to read lol

I was in St. George Utah last summer and must say at the least, I noticed a few odd things in the sky at night. I loved how the night sky looked better than it does in the east.


Can you not zoom? The pics are high quality so zooming should be possible without distorting the text.

Here is the pdf - Pages 8 and 9 onwards but the whole thing is a very interesting read.

It's all supposedly channelled material....so I find some of the factual info rather interesting within it.


Then, when further researching the info within that document I also came across this webpage:

Harmonics in the Northern Territiory

Have a really good read through that page too, because the conclusions are shocking...yet factual. There is absolutely something to those particular numbers.....and the fact I found them in channelled material and was able to cross-reference it with real research of MILITARY INSTALLATIONS (The Colorado ranch was near a military base was it not?) that are seemingly placed under 'space/time portals' makes this thing start getting all the more curious.


Will do I haven't read through the link yet but ill definitely get back to you when I have a chance to read through it.

Can anyone show where this ranch is, on a map?

posted on May, 20 2013 @ 10:13 AM
link
Cattle mutilations have been debunked, so the fact that this ranch would have them is no surprise.


Some of these other claims are intriguing, and are wroth checking out. S&F.


Cattle Mutes have been debunked? Are you serious? Who is running around throwing cattle out of helicopters and slicing them up?


I don't think the idea of a corpse bloating and stretching the skin till it tears to be that out of this world. Experiments have shown that this can cause clean, straight tears in the hide of cattle.


Not saying it's impossible that aliens have an affinity for cows and nothing else, but I'll side with what we know for now (while keeping an open mind of course).