The Little Known History of Canada's Japanese Internment Camps...Right in my Back Yard.

posted on May, 18 2013 @ 11:18 PM
link
Many members here know that I have recently re-located my food business to a small town in BC Canada. What I didn’t know and I am now learning is that I am in the middle of an historic landscape of which I had no prior knowledge of. I will write another thread of which I am currently researching on Monsanto and their tentacles in this area but for now...

Most of us are aware of the camps in the US in particular California where Japanese citizens were rounded up and shuffled off to spend the duration of the war because of fears that the US citizens had of an attack from within. But how many are aware of the exact same things happening in Canada?

This is in my backyard...literally. What I consider crimes against humanity, racism and discrimination of innocent citizens of Canada. Most of whom were legalized citizens at the time as well. Please note that this was not an action taken against only the Japanese but other peoples as well.


www.cbc.ca...
With news of the attack on the American naval base at Hawaii on December 7, 1941, years of smoldering fear and resentment against Japanese Canadians exploded into panic and anger in British Columbia.


And so begins the story of Canada’s hidden Internment Camps of which I am ashamed to learn. I can only bring forth some info and facts for you and the rest will be within reach using the links I will provide.

At the time there were about 22,000 Japanese Canadians in British Columbia, some descendants of the first immigrants who sought work in Canada in the late 1800s. From the beginning, these newcomers had been subject to intense discrimination by a largely white Canadian society.


Intense discrimination not only from the citizens but the Govt. as well:

"It is the governments plan to get these people out of B.C. as fast as possible. It is my personal intention, as long as I remain in public life, to see they never come back here. Let our slogan be for British Columbia: No Japs from the Rockies to the seas.'"


The above quote from a leader of the people at that time is what makes me ashamed of more than anything a citizen could say. The quote below from a Japanese Citizen of the time is what makes me sick to my stomach because most of the Japanese were either naturalized citizens or born in Canada. They were good enough to have in our Country to work on the roads, mines, railways etc but were they ever trusted as citizens? An estimated 23,000 Japanese citizens in total.

"B.C. is falling all over itself in the scramble to be the first to kick us out from jobs and homes ... it has just boiled down to race persecution, and signs have been posted on all highways ... JAPS ... KEEP OUT." Muriel Kitigawa wrote to her brother. "We are tightening our belts for the starvation to come. The diseases ... the crippling ... the twisting of our souls ... death would be the easiest to bear."


Which brings me to my area of the World:


Yukiharu Misuyabu and his family went to Lemon Creek, where 2,000 Japanese lived in shacks.
"The walls of our shack were one layer of thin wooden board covered with two-ply paper sandwiching a flimsy layer of tar. There was no ceiling below the roof. In the winter, moisture condensed on the inside of the cold walls and turned to ice."

My home? Just through that pass in the background. 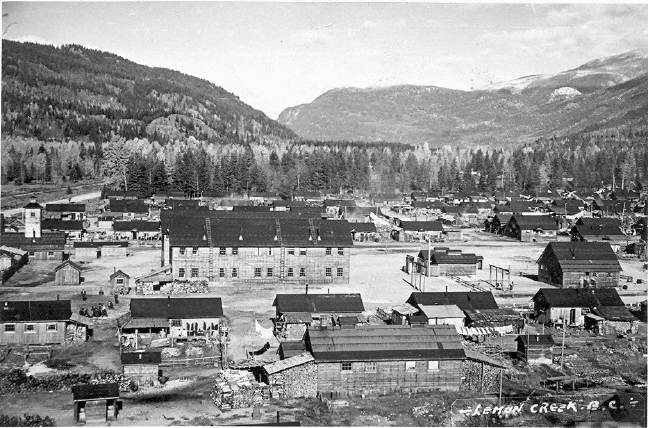 The school in the centre held classes for kindergarten-grade 12. Photos courtesy of Diana Domai. 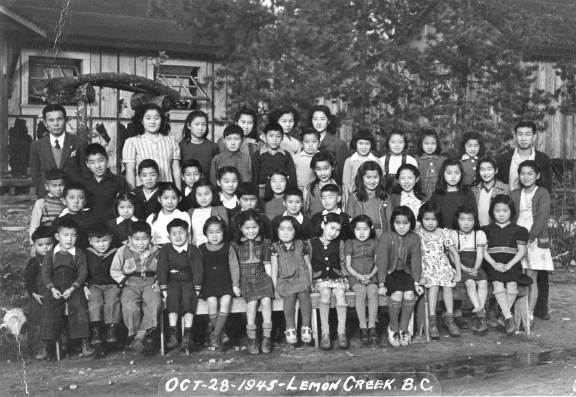 The Lemon Creek Internment Camp site in 2007, photographed by Bob Maruyama
Japanese-language School at Lemon Creek. From Diana Domai:
"My father-in-law Mr. Nobuo Domai was the teacher. Mr. Domai is standing, back row, far left.
His son Kiyo is the little boy seated on the bench in the front row, third from left in the light coloured jacket.
The children were Canadian-born and he taught them Japanese at Lemon Creek."

And how quickly the past has been erased. 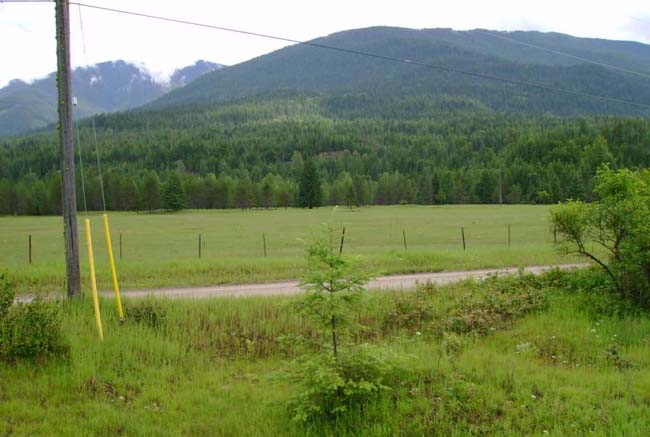 Some people have stated that although there is nothing actually visible as to structures, you can still find vegetables and fruits left over and still growing from the many gardens that were grown.

And of course, All is fair in War right?

In 1988 Canada apologized for this miscarriage of justice, admitting that the actions of the government were influenced by racial discrimination. The government signed a redress agreement providing a small amount of money compensation.


BTW, the amount of reimbursement? $21,000 per person who could prove that they were a victim of these practises and property confiscations of the time. Enough? Not by my measure whatsoever.


The apology for the Japanese internment camps would not have happened without the efforts of Tosh Suzuki, who sat in the public gallery to hear it. Mr. Suzuki, now 78, was just seven years old when a yellow school bus came to take him away from his Pitt Meadows home. He would spend the rest of his youth on the Prairies, missing school to help his family work in sugar-beet fields as they struggled to rebuild their lives.

My reason for bringing this up front?

I live in this exact area and have recently started asking my customers to share their knowledge of the events that unfolded at the time. 1 out of 10 have “Heard” about it. HEARD about these camps on which they have built their homes and businesses on the very land that was stolen from hard working and innocent people merely for being “Not From Here”. Knowing nothing of what happened here only a few short years ago.

There is a lot more to this and I have given the links to where I can see the real info is. If you have more, please share.

posted on May, 18 2013 @ 11:23 PM
link
You know, I remember reading about the Japanese camps, the govt was afraid the japanese would attack from within, my question is why didnt they do that with the German or Italians?

posted on May, 18 2013 @ 11:26 PM
link
Right here in Oregon, the picturesque, heavily marketed vacation area of Crater Lake once held an internment camp on one of its islands. Funny how these things are just swept under the rug, huh.

George Takei once posted a picture of he and his family within an internment camp.

Originally posted by HomerinNC
You know, I remember reading about the Japanese camps, the govt was afraid the japanese would attack from within, my question is why didnt they do that with the German or Italians?

Actually, it goes much deeper:


26 internment camps were set up across Canada. In 1940 an Order in Council was passed that defined enemy aliens as "all persons of German or Italian racial origin who have become naturalized British subjects since September 1, 1922". (At the time, Canada didn't grant passports and citizenship on its own, so immigrants were "naturalized" by becoming British subjects.)

A further Order in Council outlawed the Communist Party. Estimates suggest that some 30,000 individuals were affected by these Orders; that is, they were forced to register with the RCMP and to report to them on a monthly basis. The government interned approximately 500 Italians and over 100 communists.


And over on the East Coast:


In New Brunswick, 711 Jews, refugees from the holocaust, were interned at the request of British Prime Minister Winston Churchill because he thought there might be spies in the group.

The exact same area to which Slaves ran to using the underground railway from the US. Irony at it's best.

posted on May, 18 2013 @ 11:48 PM
link
Right outside of the Vancouver Delta, nestled against the pacific shore lies the town of Steveston BC
Before tha war the Japanese immigrant fishermen and their families made up the entire population....
All were shipped inland to camps east of the Okanagan in Greenwood BC.
The town still exists but its never been the same.....

Originally posted by stirling
Right outside of the Vancouver Delta, nestled against the pacific shore lies the town of Steveston BC
Before tha war the Japanese immigrant fishermen and their families made up the entire population....
All were shipped inland to camps east of the Okanagan in Greenwood BC.
The town still exists but its never been the same.....


And even more were shipped off East to Alberta, Sask, Man...etc.

I am ashamed of this History and although many either are unaware or choose not to acknowledge this fact, the story needs to be remembered.


This is the place we relocated to inorder to establish our business. We have been working about 14 hrs a day and have had little time to discover our surroundings.

I have recently started to research my surroundings and this is what I have found so far. Well, this and something about Monsanto that I am working on currently.

We still do the GF goods and although we have never advertised whatsoever, we are doing more business than we can handle. That's also another thread.