Octopuses that live in the deep open ocean are difficult enough to find. But try locating a "glass" octopus, which is nearly transparent. Floating in the dim midwaters, this gelatinous octopod looks almost like a be-suckered jellyfish.

I'm one of many people who find all animals to be awesome and mysterious. Even with the amount of knowledge and resources we know with modern science; there is still loads for us to learn from our cousins. Like transparent octopus.

Rather than camouflaging like most known octopus species, the Vitreledonella richardi has taken this alternative approach to hide from potential predators--and perhaps from prey as well. Its translucent body helps it remain less visible, especially when it is near the upper reaches of its habitat, around 300 meters, where some light still penetrates. (Some specimens, however, have been caught nearly 1,000 meters below the surface.) Only sparse red chromatophores (which appear black in such dark environments) color their flesh.

The glass octopus's unusual appearance makes for a rare view inside these elusive animals. Photos taken from the deep show the opaque digestive organs and optic nerves. Its small suckers stand out as white adornments in the bright light used to film them. 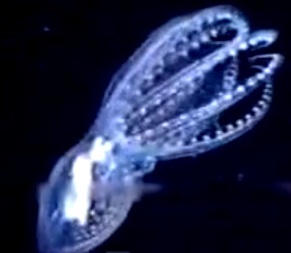 There is more information in the sourced articles. As I watch the short video and view the picture I cannot believe how alien this octopus is as it's body is like a clear glass. But I guess we're aliens to the octopus too. Hopefully you find the information informant.