Yeah.. That is showing quite a lot of volcanic eruptions, isn't it? I've been watching that near daily for at least a year and a half. That and another one.... Today stands out a bit for how much is listed. Hopefully, we don't have a big one do anything. That would put a chill on things that would have us wishing for warmth for a few years....

* I used a screen shot program to save the screen at RSOE to PDF...it's showing so many in different places in the world at the moment as active with eruptions. Not a bad thing to save for reference, perhaps.
edit on 14-5-2013 by Wrabbit2000 because: (no reason given)

The area around Mexico City is on alert after a nearby volcano showed increased activity, pumping out steam and shaking.
By Richard Fausset

MEXICO CITY -- Mexican officials are preparing evacuation routes and shelters for tens of thousands of people who live in the shadow of Popocatepetl, a giant volcano 40 miles southeast of Mexico City.

"Popo," as the volcano is known, has displayed a "notable increase in activity levels" in the last few days, including tremors and explosive eruptions, according to a statement from the federal government.

Webcams have shown large chunks of molten rock spewing from the crater, and ash has rained down on the nearby city of Puebla. On Sunday, Mexico's National Center for Disaster Prevention elevated its warning level to "Yellow Phase 3," the fifth stage of a seven-stage warning scale.

At the next stage, the government warns, "there is danger. You and your family should be ready for evacuation."

The 17,887-foot Popocatepetl, which means "smoking mountain" in the Aztec language Nahuatl, dominates much of the landscape in central Mexico, along with its nearby "twin" volcano, the dormant Iztaccihuatl.

There have been moderate outbursts from Popo in recent years, forcing the government to evacuate as many as 75,000 people at a time.

RSOE is not showing it, only on the 8th hisz.rsoe.hu...

posted on May, 14 2013 @ 04:12 AM
link
No hoax, this is another of piles that the forum no longer serves its original purpose and became subjective

so because the video is from another event it invalidates the true information posted in the first link?

No hoax, the sister paper of Miami Herald in spanish from a spanish wire report of Agence France Presse reported it.

It happened on the night of May 7 local time


I agree, I don't see how the thread can be regarded as a hoax just because the video is old, it is still the same volcano and it IS ERUPTING! I saw reports on this on SkyNews last week, they were reporting "Rocks as big as sittingrooms being ejected" How is this a hoax? There was no attempt at editing the video to obscure the date, it is a video that is relative to what is happening now!


I agree, I don't see how the thread can be regarded as a hoax just because the video is old, it is still the same volcano and it IS ERUPTING! I saw reports on this on SkyNews last week, they were reporting "Rocks as big as sittingrooms being ejected" How is this a hoax? There was no attempt at editing the video to obscure the date, it is a video that is relative to what is happening now!


It's a hoax because it's not accurately representing the facts. If I take a picture of a shooting from 2009 with a black victim, and then post it referring to a shooting that happened yesterday which also had a black victim, are they one in the same because both are shootings, and both have black victims?

You see how that works. All you need to do is repost the story with proper sourcing. There is no reason to give credit to people trying to misrepresent the facts.

If you take their story at face value it's false. The video does not represent what's going on. I think this probably could have been cleaned up without hitting the bin though, but whatever. Personally I'm not going to lose sleep over it.
edit on 14-5-2013 by boncho because: (no reason given)


I accept your point but the fact still stands that this is the SAME volcano and not some other volcano which happened to erupt in 2011! I for one am glad to at least see some footage of this volcano erupting as I find them fascinating! Perhaps it would have made you happy if the OP had stated that the "Video is of Popocatepetl erupting in 2011 and the same volcano is NOW erupting"?

The difference between your example and this is quite clear, in your example there are two dead victims and two murderers, in this case there is one volcano, two eruptions! Therefore the video DOES represent, perfectly, what is going on!
edit on 14/5/13 by wiser3 because: (no reason given)

Meanwhile, Mexico cities are being covered in ashes and there is even magma volatiles in the eruption...

I posted new video footage from just days ago showing eruption but it was deleted.. so I'm not going to bother creating threads on ATS Fragile Earth anymore 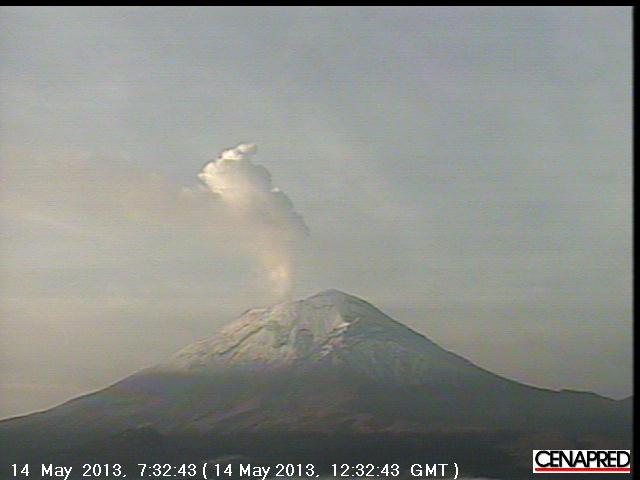 posted on May, 14 2013 @ 10:30 AM
link
I'm a little confused about the HOX bin designation here. RSOE reports an eruption from this Volcano in a bulletin on the 9th. It reports a major increase in alert level to expect another one on the 12th and another bulletin is out today.

People DO notice and check the events on RSOE for the updates, right? The initial event listing isn't always the end of things for that site's disaster news..and in this case, there are a few more items of very relevant detail in that update section, IMO. Including, what the OP here was talking about ...given the date?